How should corporate communicators respond to #ActNow #Greta and the #climateemergency? 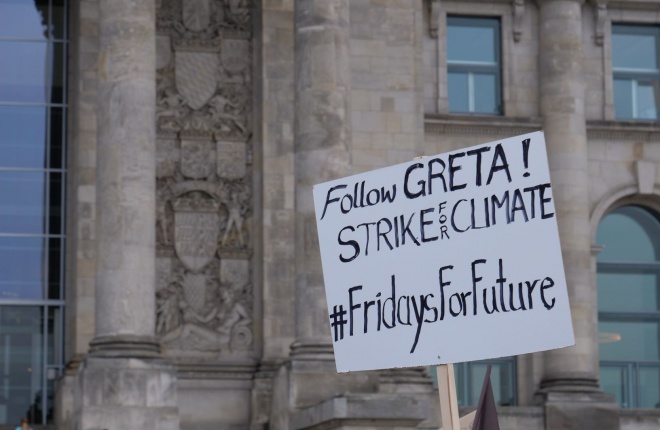 “You told us that the future was something to look forward to,” said the 16-year-old environmental activist Greta Thunberg, the voice of a generation. “Can you hear me?”

(Main image: Under the motto "#FridaysForFuture" and "Climate Strike!", students protest in front of the Reichstag building in Berlin, December 14, 2018/ Photo: Leonhard Lenz)

Last August, Greta became the youngest best-known activist on the planet. She told us that the planet was burning up. Climate urgency had turned into a climate emergency. Her call to conscience?

Act now. Act as you would in a crisis. Act as if our house is on fire. Greta Thunberg

Hard to be unmoved by the solitary girl with her protest placard on the steps of the Stockholm Parliament. She stood there for three weeks, hoping adults would listen. Six months later, 1.5 million young people in 100 countries worldwide followed suit, making 22 March the single largest day of climate action in history.

“Do something!!!” say Europeans

People care about the environment more than ever before. The highest priority for young people in Europe is the environment and climate (67 percent) according to a recent Eurobarometer survey. 96 percent of people think it’s important to look after nature and 93 percent link their own wellbeing with nature.

Yet the first global assessment of the state of nature published on 6 May reported a shocking one million animal and plant species threatened with extinction, many within decades. Climate change is now “climate emergency” and nature loss is now “wildlife extinction”.

Greta’s fearless rhetoric proved to be influential. She shamed business leaders in Davos, MEPs in Strasbourg and MPs in London. The UK and Ireland declared the climate crisis an “emergency”.

Extinction Rebellion activists joined Greta in whipping up a wave of momentum on the streets. Teachers, doctors, parents and workers came together, in the UK and beyond, in one of the most insightful, inclusive and instructive movements seen in recent years.

Seeds of conscience are sprouting. Some of the biggest European companies wrote an open letter to EU heads of state urging them to put climate change at the top of the agenda. The politicians didn’t declare a climate emergency. But the new European Commission in Autumn 2019 may well heed the call for a more ambitious climate-led sustainability strategy.

How have you responded? Who hasn’t dug deep and reflected on their own role and responsibility? Who hasn’t held a sustainability workshop, strategy review or communications-led Board-level discussion policy to address this new reality?

The tone of voice, the urgency, the language and the image of Greta have inspired many corporate communicators to review their own messages, sentiment and strategy and they need help to “think differently”.

Even if you’re on the right track, you’ll get run over if you just sit there. Will Rogers.

Staying ahead of the crisis, we can all take a leaf out of the Extinction Rebellion playbook for policy makers to tell the truth by declaring a climate and ecological emergency; act now to halt biodiversity loss and reduce greenhouse gas emissions to net zero by 2025; and put people power at the heart of policy making through Citizens’ Assemblies for climate and ecological justice.

Looking through the lens of climate emergency means taking a new approach to communication, what I call “communicating with integrity”. Integrity has dual meaning. It means honest and principled (the who are we), but also united, whole and complete (how we function). It is the whole idea, in the age of silos and separation, that creates an integrated approach to sustainability strategy and communication.

In the era of fake news, we must pay attention to be scientifically precise and rooted in facts while communicating clearly on environmental issues. On 6 May the Editor in Chief of the Guardian newspaper instructed their journalists to use more appropriate language when writing about the environmental catastrophe that scientists are describing.

Who has not already taken this mantra to heart and recommended stronger language befitting of the new reality?

In the Age of Greta, silence is complicity.
Great things are expected of great communicators.
Over to you!

Jo Sullivan is a senior advisor on sustainability and strategic communication for corporate, NGO and EU Institution leaders. Jo founded Conscience Consulting in 2007 as the first activist agency in Brussels, and in 2014 co-founded the Transition500 Alliance, a global network of sustainability communication consultancies. Previously as campaigns and communications director for Friends of the Earth, Jo created the 20.20.20 campaign for climate action which was rolled out across 27 European countries. Jo runs workshops on strategy, campaigns, messaging and influence across Europe, teaches at IHECS, the Brussels Communication School and delivers webinars on her book, Creating Employee Champions: How to drive business success through Sustainability Engagement.