Are banks and insurance firms communicating the wrong topics? A new global reputation study by  Caliber and the EACD reveals that the financial  services sector is distracted by FinTech competition –  but there is a silver lining. 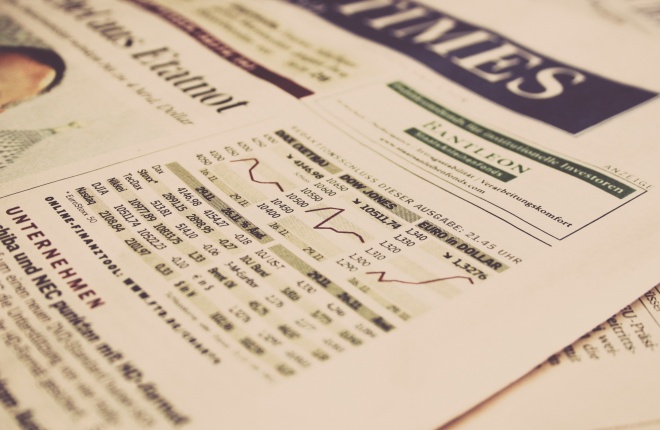 Photo by Markus Spiske on Unsplash

The collapse of the investment bank Lehman Brothers on 15 September 2008 turned what was until then a US financial crisis into a full-blown global meltdown that would later be referred to as the “global financial crisis” or more dramatically as the Great Recession.

In the ensuing months and years, the situation deteriorated, and, following taxpayer-funded bank bailouts around the world, people began to question the role and integrity of banks and bankers.

The resulting breakdown of trust between the public and the financial industry, evidenced by countless headlines and studies, seems to suggest that the reputations of financial services institutions are forever doomed. However, a new study suggests this is not the case – though it does find that competitive threats are distracting communicators in the sector from what really matters to their companies’ reputation.

The 2019 Global Financial Study was conducted earlier this year by Caliber and the European Association of Communication Directors to find out whether trust in the sector was being restored, and if so where and how. We wanted to get a better understanding of the dynamics of the reputation of the financial services sector among the public worldwide. The study included around 4000 interviews across 13 different countries (China, Brazil, USA and 10 European markets), evaluating 124 financial institutions in total.

In light of the scandals that perpetually bedevil the financial industry, you would be forgiven for concluding that the industry ranks low on reputation. However, using an index we call the Trust and Like Score, we found that the reputation of the financial industry is rather robust: close to the average of thousands of companies across different sectors and countries. We did however find that this varied to a great degree across countries, and was also helped by the fact that insurance companies have clearly more favourable perceptions than banks.

Not only do countries differ in the strength of public perceptions of the sector, but also in the drivers of these perceptions. Beyond measuring trust and affection, the study measured other views people have of these companies as well; from how they evaluate their offering and innovation to their perceptions of these companies’ responsibility, leadership and more. Understanding which of these elements drives a sense of trust and affection is important, as it helps explain why some companies find it more difficult to win preference and loyalty, and what they could do to improve perceptions.

To that end, we conducted a driver analysis that helped us identify what the main drivers are among the survey respondents and how they vary across countries and segments. This allowed us to identify that, while in Nordic countries, companies’ reputations are driven primarily by “soft” elements like perceived authenticity and integrity, in other countries – such as France and the UK – it is primarily perceptions of the product that build trust and affection towards the company. In countries like Brazil and Germany what matters most when it comes to building trust is being differentiated. However, most countries do share one surprising phenomenon: the low importance of innovation. An interesting finding, to say the least, and one worth exploring in detail.

As explained above, analysing reputational drivers helps to answer a key question: what should banks and insurance companies focus on in order to win more preference and loyalty from consumers and society? This of course depends on the environment within which banks and insurance companies operate, as well as the types of threats and opportunities it provides. This is where the study’s finding about innovation is particularly unexpected.

"What should banks and insurance companies focus on in order to win more preference and loyalty from consumers and society?"

Whereas in the recent past the sector’s primary threat was the regulator, today that threat is competition, and more specifically competition from FinTech. This appears to be driving messaging in the sector, with an increasing emphasis on innovation and product offering – like the focus on mobile apps, AI-powered chatbots and payment technology from the likes of Bank of America, CaixaBank and Barclays.

In this context, it was interesting to find that this focus does not in fact lead to greater consideration or recommendation among the public: despite the above-mentioned differences in reputation drivers across countries, innovation was universally found to be a weak driver of trust and affection, and in turn of preference and loyalty. In each country, it is ranked as one of the three least important drivers when it came to banks – though slightly more important in driving the reputation of insurance companies in the Nordics and the US.

Conversely, in almost all countries, integrity and authenticity are among the three most important drivers, especially when it comes to banks. The inevitable conclusion is that while the industry seems obsessed with communicating its innovation in order to compete with FinTech, it seems this has less impact on customers, who prefer a better understanding of how the companies behave. In light of this, and despite received wisdom, focusing on innovation seems to be the wrong strategy for improving reputation.

So what explains the success of FinTech providers such as Venmo in the US, which has recently hit 40 million yearly users, and London-based TransferWise, recently valued at $3.5 billion – more than double its valuation less than two years ago?

The future is bright

A look across generations reveals that, when it comes to people’s perceptions of financial service providers, their age matters. When we split the global scores based on the respondent’s age, we expected to find that younger people – generally viewed in today’s business world as being more ethically minded – would be more negative towards financial institutions. However, the data clearly shows that this is not the case. In fact, the youngest respondents (those aged 18 to 24, who we refer to as Generation Z) express the highest level of trust and affection towards banks worldwide, followed by those aged 25 to 42 (Generation Y/millennials). 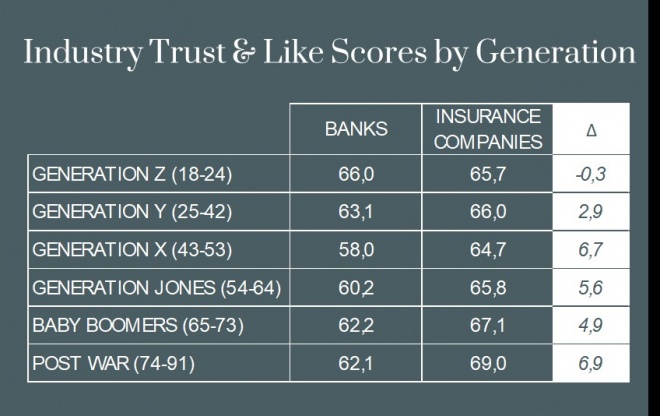 The older Generations X and Jones (younger baby-boomers) are the most critical, while baby-boomers and the post-war generation all hold opinions that are less favourable than the young. However, this is not the case when it came to insurance companies, where all generations seemed to hold similar views.

This finding is the silver lining to our story: while the trust crisis continues to be profoundly serious, banks stand a chance of repairing it going forward, because the younger population – who will increasingly form the voters, consumers, employees and influencers that matter to the banks – is more positive and less judgmental than banks might think.

Even more interesting are the drivers behind the perceptions of the younger generations. Again, despite the high importance of integrity and authenticity seen across countries, younger people are driven by things like differentiation (most important reputational driver among Generation Z) and product offering (third most important driver among millennials) more than their elders are.

In fact, breaking down reputation drivers by age reveals several interesting findings, which we discuss in the report – not least the fact that the low importance of innovation applies across all age groups. However, when read against the young generations’ relative favourability towards banks, it raises questions: if young people aren’t quite so critical towards banks and don’t consider innovation so important, why are they so attracted to new technology-driven financial solutions offered by start-ups? Is it perhaps not the innovation itself that attracts them, but rather the sense of differentiation that comes from the attitude of these new outfits, which is very important to Generation Z? Or the sense of authenticity that both Generation Z and millennials value so much according to this analysis? This may suggest the financial industry may have gotten it all wrong when selecting the type of messages and offerings that would compete with FinTech and appeal to the young – it may be more about attitude and style than technology and offering.

To sum up, the average global reputation of the sector is indeed better than expected – and in countries like Brazil and China much better, in fact. We can also see that insurance companies are better perceived than banks, and most importantly that younger audiences are more favourable towards and willing to support financial institutions. This presents the potential for a brighter reputational future for the industry, if it pursues the right strategies.

According to this study, when it comes to the most important future audiences consisting of Generations Z and Y, the right strategies are to become more clearly differentiated, to be authentic, to demonstrate integrity and have compelling services. If banks and insurance companies can do that, perhaps the financial sector could once again become a bastion of credibility and legitimacy, supported by societies and individuals the world over..

Having previously run the EMEA consulting practice of Reputation Institute, Shahar is now CEO of corporate brand and reputation specialists Caliber (www.groupcaliber.com). He has more than 20 years of experience in this field working out of New York, London and Copenhagen