In an age of information overload, it is tempting to think that anything can be a story. But can it be a good story? To decide, let the seven pre-conditions of great storytelling be your guide. 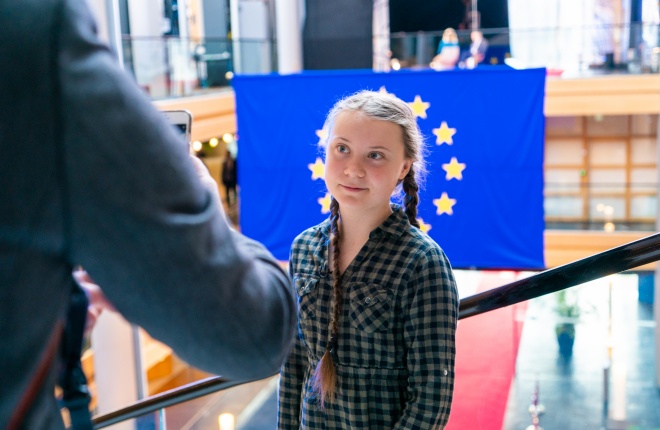 Greta Thunberg’s alignment of a simple story with her actions makes her an example of good storytelling / Image: European Parliament/Flickr

A t the start of September, I had delivered the opening keynote at the excellent Plot19 storytelling conference in Munich. The topic I was asked to address was simple: “Today, can everything be a story?”

I quickly realised that I wanted to answer a subtly but crucially different question. Why? Because the original question was simply too binary, when the much-discussed topic of great storytelling is far more nuanced.

That expectation that we can provide binary answers to non-binary questions is sadly one of the characteristics of our age. "Is the European Union a force for good?" Well it depends slightly on who you are, where you live and on what day it is.

More prosaically, it is rather like answering the question: “can anyone tell a joke?” As my wife and daughter will tell you, I may think I can – but is it a good joke?”

The real question we need to answer in today’s information-saturated, lightning-paced and divided times is: "Today, can everything be a good story?" And if so, what are the pre-conditions for great storytelling? For me there are seven, which, taken together, provide a powerful formula for telling high-impact stories: ​ 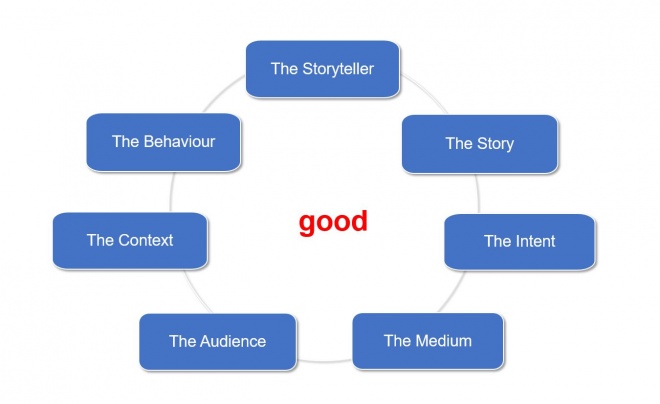 It may seem like a statement of the obvious, but you have to be credible to tell a story. Your audiences need to believe in you as the authentic carrier of your message. Put another way you need storytelling permission. Without that, everything else is irrelevant, however good your story.

The underlying message was almost identical: what unites us is stronger than what sets us apart. Yet, even if you question whether a sugary drink can help calm international or racial tensions, Coke arguably had markedly more brand permission to try.

A brand that stands for love, sharing and togetherness – and had taught the world to sing in perfect harmony as far back as 1971 – was patently a more credible storyteller on this topic than its rival.

On the architecture of the creative story, there are few better thinkers than my former colleague and best-selling writer, Petra Summer, and there is one element in Petra’s storytelling model (“Every story needs a reason to be told; every great story has a hero; every great story starts with a conflict; great stories are heart touching; great stories go viral”) that stands out above the others – the hero.

Even though every story needs a hero, in the world of commercial brands it is easy to fall into the trap of thinking that your brand is the hero. It is not, any more than your products or services. Your real hero is invariably your audience or users, their lives or even a theme that unites them.

"It is easy to fall into the trap of thinking that your brand is the hero. It is not."

Personally, some of my deepest wells of storytelling inspiration lie beyond the highly-funded mainstream of the major film studies and record labels. The universal narrative of Fritz Lang’s 1927 milestone Metropolis as an alternative to Alex Garland’s tale of our uncertain relationship with technology in Ex Machina. The nail-biting, one-take brilliance of Sebastien Schipper’s Victoria rather than Edgar Wright’s Baby Driver. Seek out film, music, poetry and art that challenges convention away from the path most-trodden.

We are all seemingly obsessed with purpose these days and it is wonderful that the world is waking up to the need for organisations of all kinds to focus on the core of Simon Sinek’s Golden Circle: the “Why?” (see Simon’s TEDX talk, 'How great leaders inspire action').

However, I do worry that as ‘woke-washing’ becomes an increasing concern, we risk leaving purpose at too abstract a level. Like mission, vision and values, purpose is great in theory. But to truly bite, it has to be enacted every day in how a brand or corporation thinks, acts, speaks and looks.

To quote one of my favourite sayings, “it’s not what you communicate, it’s what you cause”. So, within the overall rubric of your purpose, what is the specific intent of the story you are trying to tell and what do you want it to cause? How do you want people to think, feel and behave as a result? How would you like the world to be different when you’re done?

"How would you like the world to be different when you’re done?"

Greta Thunberg shines through as the most striking contemporary example, mainly because her story is so simple and so aligned with her actions: “We are in a climate emergency and we need to act now. The adults won’t do so, so I’m going to strike until they do”.
In parallel with that absolute simplicity of message, it is the clarity of the intent behind her story that has made her an irresistible force and such a threat to the established order.

In a world of ever-proliferating media and cross-channel amplification, storytellers have almost infinite options for telling their stories. We must, therefore, make choices and it is when brands make unexpected, even playful, media choices that their story can change in wonderful ways.

As you consider your content and channel choices, remember that those media choices can fundamentally inform the content that brings your message to life.

Stories cannot exist in isolation from their context or their intended audience. If you want to drive real social or behavioural change, your storytelling choices have to be founded on fundamentally human audience understanding in the here and now. Because the best stories tap directly into their audiences’ very soul and capture the mood of the moment – bravely, confidently and with conviction.

Whether or not you struggle with the alleged misogyny, xenophobia and intolerance of Boris Johnson and Donald Trump (I do, for the record), their audience understanding and context-based storytelling has left their rivals standing – for now at least.
“Make America Great Again”. “Take Back Control”. Active verbs. A clear call to action. An emphasis on a nostalgic lost past. But also phrases based on an acute feel for the real-world experience of a specific audience group just big enough to deliver electoral success, while dividing and alienating nearly as many others.

The brilliance of Weiden & Kennedy’s Colin Kaepernick ad for Nike was in its astute grasp of audience sentiment in a cultural context, the absolute link with the core of the Nike brand through the ages and the use of irreverent humour to respond to the inevitable backlash from some with the #justdoitsafely content.

Your diverse audiences are people – sentient human beings with needs, wants, beliefs and values. For me, values are becoming today’s main storytelling battleground in our polarised word, because if you don’t understand your audience from a fundamental human perspective, what hope do you have of your story hitting its mark?

Major brands have cottoned on to the joint power of harnessing deep audience understanding and its natural bedfellow: context.

As with Nike, not everyone was happy and yet the numbers from both a brand and sales perspective showed that this brave piece of storytelling has hit a positive and highly contextual audience nerve.

Let’s finish with what may seem like a potential wild-card: your corporate or brand behaviour and the ‘say-do gaps’ between what you say or claim, the expectations that creates and your ability to meet them through your behaviour.

The impact of the #metoo movement has provided powerful examples of supposedly great storytellers seeing their careers ended by appalling personal behaviour. The same holds for brands.

Volkswagen is now facing Germany’s largest ever legal claim from around 400,000 customers, with Dieselgate calling into question the reputational sustainability of being ‘the people’s car’. We see strong echoes of the clash between State Street Global Advisors’ seemingly world-class visual storytelling (with the remarkable Fearless Girl) and the five million dollar settlement for alleged pay discrimination against female employees and executives of colour.

Not a wonderful look, reminding us that even the greatest stories – or storytellers – can be undone if there is a say-do-gap between the storyteller, their story and their actions in the real, everyday world.

Credible storytellers, telling stories with heroes other than themselves, backed by absolute clarity of intent about what they want to cause. Stories that use media in unexpected ways, harness the power of context and the core values of their audience, while aligning words with actions. So, how are you measuring up?.