Since 2014, StopFake.org has been waging a war against propaganda between Russia and Ukraine 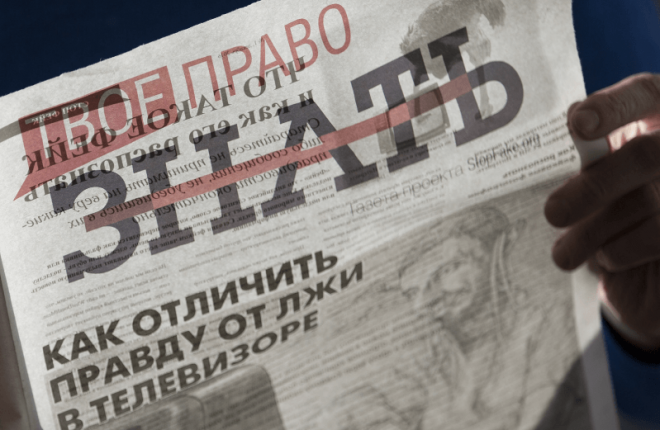 Since 2014, StopFake.org has been waging a war against propaganda between Russia and Ukraine.

From photo-shopped pictures to adapted videos, StopFake.org names and shames fake stories – and provides the tools for people to do their own fake news spotting. To find out more about how to spot fake news, the weapons of propaganda, and the spread of alternative facts, Communication Director spoke to Yevhen Fedchenko, director of the project.

First of all, what’s the difference between a piece of propaganda and a piece of fake news? Do you approach them the same way?

Fake news is just one of the many tools used in propaganda. Because propagandists can use many types of tools to persuade people. For example, they can develop a separate narrative, which wouldn’t necessarily be fake but which would be organised in a way that forms public opinion and influences decision makers. Propaganda can use real journalists who write real articles but they might be manipulated to present their positions in a way in which people don’t know that they have been used for propaganda.

“Fake news is just one of the many tools used in propaganda.”

Hacks and leaks are also used to deliver an alternative stream of information. And again, the problem here is that often we cannot say how genuine this material is, or whether they can be trusted or not. But people are discussing them and even using these materials in their decision making processes on the political level, the diplomatic level, for business news and other things. It’s a multi-layered system and if people are not monitoring all this systematically and are not taking note of all this, they definitely would not be able to differentiate the real from something that is manufactured.

How exactly does your network fact check stories for fake elements?

We have a list of media which are most often involved in manufacturing fake news and we monitor them on a daily basis. We also have a list of indicators for potential fake news – it might be the headline, it might be the use of specific wording, provocative photos or other things. We pay attention to all these markers and if some articles are suspicious to us we send them to our fact checkers.

Another option is an area of our website where people can report a fake news story. Anyone can send us a link to something suspicious and our fact checkers will look into it. We look into the sources of the information, we try to contact the sources to verify if the sources have really been saying this. If we see a translated quote from a policy maker or politician we would verify if the translation was done correctly. We also pay attention as to whether a headline and the rest of the text are about the same thing. What we do is pretty much what any journalist should be doing. That is, the multi-layered verification of reporting that is the basis of journalism.

Once you find these examples, how do you bring it to the attention of your readers?

We want to make sure that StopFake is not only a daily debunker but also an archive. We upload links and other information, and we also include screenshots because sometimes the original fake stories are removed or altered when they become too famous. After we collect the material, we want to make sure that these debunked stories reach different audiences. We use all available tools to promote the website, including Russian social media networks.

We also conduct a lot of lectures, meetings and other types of events, talking to different professional groups like journalists, students, policy makers, diplomats – whoever is interested in this topic. This takes place in all the European Union countries, and now we see more interest in the United States also. We also produce a television programme, because a lot of people are influenced by propaganda just through television.

At the beginning, it was not obvious to us how big this system is. We’d just spot it here and there but we didn’t know how they might be connected. Now that we’ve had more than 1000 stories debunked on our website, we can analyse them to see if there is a system behind them. The answer is yes, there is a system behind it, because all these fake stories are similar across the whole Russian ecosystem of propaganda.

At the end of every article we mention which media organisations were involved in spreading this particular story. Almost every time it’s pretty much the same outlets, so we included them in our daily monitoring of the usual suspects. The second point is that all this propaganda coincides with the talking points of the Kremlin. It’s definitely a top-down organised system because it is the same in terms of the content and time frame. When the Kremlin says something all the media immediately deliver close to the same message.

Or sometimes the media distributes propaganda before hand to prepare the crowds for another action or they collectively explain what the Kremlin was doing and why it was happening. It’s really systematic and well organised. Our research identified 18 main frames of Russian propaganda on the subject of Ukraine, including the most famous things like: “Ukraine is a fascist state”, “Ukraine is a failed state”. All of these frames are repeated every week because repetition is the key to any propaganda.

The fear of outside interference in national elections across western Europe has been at a fever pitch this year, most recently with the hack of the Macron presidential campaign in France. Are you advising the powers in western Europe about how to combat election propaganda?

Yes, we are contacted by them because probably no one else has this amount of expertise on this issue, and we see a growing demand for this knowledge from governments within the European Union to different agencies within different countries. There are two kinds of propaganda they should be looking for. One is openly attributed to Russia like Russia Today or Sputnik in many languages. That’s one tool, which is easier to monitor.

But another part is these new websites and the thousands of associated social media accounts. They produce alternative narratives and quickly distribute them to make sure that this alternative agenda quickly becomes visible and enters their political agenda in different countries. That’s exactly what happened with the US elections. It was not an open intervention from the Russian side but we’ve seen a lot of smaller website, that we didn’t know existed previously, promoting their truths and they became a part of the traditional discourse even though they weren’t there half a year ago. It escalated very quickly.

You’re seeing this pattern repeated, first in Ukraine then in America and now western Europe. Are there particular challenges involved in fact checking stories that originated in a different corner of the world?

We operate in 10 languages, because now there are almost no single national stories any more. All stories are somehow connected. For example, there are a lot of fake news about Ukraine which originated in German media. Recently we had a story about a fake letter from the German ambassador to Ukraine to President Poroshenko, saying if he would conduct elections in Donbas Germany would give money to his presidential campaign. Is that a story about Ukraine or is it a story about Germany? Or is it even a story about something different?

We can find at least three countries which are involved in this story – Ukraine, Russia and Germany. That’s why it is now difficult to separate stories and say “This is only a Ukrainian story, this is only a German or French story” because they are really all connected.

What can communicators do to battle the spread of fake news?

According to Yevhen, steps to tackle disinformation include:

Yevhen Fedchenko is director of the Mohyla School of Journalism at National University of Kyiv-Mohyla Academy, Kiev, Ukraine and co-founder and chief editor for stopfake.org. He has spent almost 20 years within the media industry, covering international stories for different types of media. He was co-founder of Digital Future of Journalism programme for journalists and Digital Media for Universities Internet journalism curriculum development programme. He teaches courses in international news and factual programming. His main interests are digital journalism and innovations, journalism education in transitional societies, news standards, propaganda and weaponisation of information, coverage of international politics in media. He has contributed to RFE/RL, BBC, NPR, Public Radio International, Radio Canada International, CBC, Mashable, SKY and more.In 2010-2011 Yevhen Fedchenko was Fulbright visiting professor at USC Annenberg in Los Angeles, USA.