"What's the link between innovation, leadership and trust?"

Interview with Frederik G. Pferdt, head of innovation and creativity programs at Google, shares his insights into the values and practices that reinforce the company’s thriving culture of experimentation. 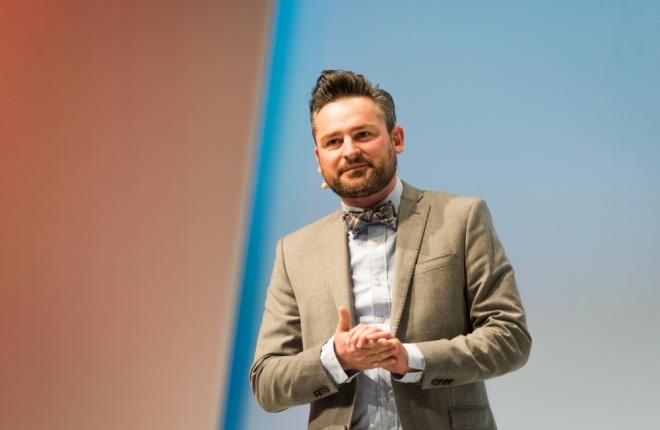 Frederik G. Pferdt, head of innovation and creativity programs at Google, shares his insights into the values and practices that reinforce the company’s thriving culture of experimentation.

How important is a culture of innovation to successful leadership?

Innovation is crucial to leadership, but I would encourage people to look at in reverse: it takes successful leadership to be able to foster a culture of innovation.

You’ve created design experiences for various groups, from kindergarteners and teachers to CEOs. What attitudes to design and creativity have you found among the CEOs you’ve worked with?

I feel lucky to engage with two to three organisations and their CEOs per week, including NGOs, governments, start-ups and corporates. We explore the importance of creativity and how they can nurture a culture of innovation. Also, getting inspiration from children is important for me, because they remind me about the power of playfulness and a beginner’s mind. For a lot of executives this concept sometimes seems hard to grasp. But once they explore playfulness, they love it and consider it something that helps them dream up big ideas while finding fun in the question: what if? Everybody walks away with a deeper understanding of what creativity and ‘design’, as a verb, can do in their organisation.

Above: Frederik's keynote at the European Communication Summit 2015

I deeply believe that there’s no single model of innovation and you can’t force it. But as an organisation you can facilitate it by providing the cultural norms and infrastructure so that it can be allowed. So ask yourself: how can you create an environment where you’re empowering employees with information and the freedom to take risks, giving them the time and the passion to pursue their dreams, and activating these moments of synergy where innovation simply happens?

Projects like CSI: Lab and The Garage represent a leap of faith by Google in the effectiveness and resourcefulness of their people. What is it about Google’s leadership that makes it willing to put so much trust in their employees that they gift them with so much ‘play’ time?

Everything starts with the belief: give people freedom and they will amaze you. So we give our employees the freedom to ‘play’ and explore new ways of doing things every day. We provide them with a platform that empowers them and makes them owners. And then we get out of the way. It’s why we focus so much on getting the right people. If you hire smart, creative people and you treat them like adults while trusting them to do the right thing, they actually will. The nice thing about giving people this freedom is that freedom is free. A lot of what we do costs nothing and is rooted in our core beliefs and values.

Can you tell us more about CSI:Lab and The Garage?

CSI:Lab, which stands for Creative Skills for Innovation, is my program which empowers Googlers to radically collaborate in order to develop new-to-the-world solutions and explore their identity as a creative individual. In this program we allow our people to learn about their ideas while building them with incredible speed. The Lab runs across the world with hundreds of teams per year. Many ideas are not successful, and that’s OK. Taking a leap of faith and experimenting with new ideas is what we encourage. That’s why we also built a space known as The Garage, Google’s hacker/designer/maker space which is an intentionally unfinished, flexible and open space where playfulness is encouraged and where Googlers can create, collaborate and experiment with new, sometimes seemingly impossible ideas. The environment looks like a kid’s play space gone wild, with everything from playdoh and coloured paper to oscilloscopes, but also computers and 3D printing machines, laser cutters, tools, tables that can move anywhere and the ability to write on just about any surface. Some people talk about the land of magical thinking. For us this is where that thinking happens.

Among all the creative exploration done by employees at CSI: Lab and The Garage, is it possible to spot tomorrow’s Google leaders?

Yes. The best leaders we see are people with the ability to step up to lead when it’s necessary and step back when it’s not. So in a sense everybody is in a leadership position from time to time, regardless of title or position.

What’s the secret to assembling effective, multidisciplinary teams that work well together?

Radical collaboration is super important, but for teams to be successful and perform, you need to give them psychological safety. Creating an environment where they trust their own creativity, the ability of their team members and the leader so that they can take risks, is key. The ability to fail forward is part of the process of succeeding and no one would take risks if they knew their job was on the line. Here it is the opposite. We want you to take risks and try things you wouldn’t ordinarily try.

It’s said that transparency is a hallmark of Google’s internal culture, with Larry Page and Sergey Brin setting aside large chunks of their time to take part in globally-streamed meetings where they share updates and take questions. What’s the idea behind this kind of vertical transparency?

When you have transparency, it builds trust. We go beyond just having a transparent culture, where all company information is accessible and shared. We actually see a great sense of humour coming with it. One internal tool called memegen allows our employees to make fun of anything, their work and each other, and then share it with colleagues, which is in itself a great feedback tool. But let me come back to the various benefits of a transparent culture. First, our employees feel engaged. We share everything we can, horizontally and vertically. Transparency and knowing everything that’s going on within the company gives Googlers a sense of ownership and deepens engagement. Second, our employees have a voice, we empower them to ask questions and raise concerns. This gives rise to better ideas and helps improve things. Plus it reinforces the idea that everyone can participate.  Last, it gives our leadership deep insights into what is on peoples’ minds. What’s working in the organisation and what’s not. Wouldn’t any leader want to know that in order to take action and make things better?

Room for failure is an important tenet of Silicon Valley. How should leaders calculate the degree of failure they are willing to allow their team in the innovation process?

We love people who have big, bold ideas they are passionate about, who dive in with a child’s mindset and make statements that the so-called grownups would call impossible. And if you shoot to make the impossible possible, you will make mistakes on the way. If you don’t make mistakes, you are not pushing the boundaries enough. Nobody wants to fail, but if you push the boundaries of what’s possible, you can learn a lot, fast. And surrounding yourself with people who are eager to learn a lot fast is probably a good thing because the faster you and your team make mistakes, the faster you learn, which increases the speed to success.. For me it is important to try things only once, to keep exploring the new. And so I learn a lot.

Google’s mission is “to organise the world’s information and make it universally accessible and useful.” To what extent are mission statements such as Google’s helpful to its innovation leadership?

Mission gives meaning and it motivates employees. At Google, we found through our annual survey (Googlegeist) that people love the work they’re doing, they feel lucky to be able to do it and they see it as impactful and meaningful. The desire to make the world better and improve people’s lives through technology is in our DNA. To have this desire doesn’t necessarily imply that we will succeed, but every time we fail, at least we fail doing something meaningful.

As companies grow bigger, they sometimes don’t work as well as when they were smaller. With around 53,600 employees, how does Google maintain a culture and keep this close relationship between leadership, innovation and trust?

That is a great challenge which we face every day. Googlers come to Google to do cool things that matter. They stay because they want to keep doing cool things that have a meaning and big impact. People can thrive at Google because we give them freedom, ownership and support to pursue their vision at scale, at a pace that is faster than anywhere else in the world.

Finally, as head of innovation and creativity and co-founder of The Garage you are a leader yourself, as well as a publicly-visible figurehead of thought-leadership. What is your personal approach to leading your team?

I try to give my team all the freedom they want and motivate them through the meaning they find in the work and the impact they see across the organisation and beyond. Trust is the currency of the digital age and it is one of the keys to team performance. So for me it all starts with trusting people that they will do the right things. I run a small centralised team to stay nimble, while having around 200 catalysts embedded in the whole organisation who help me drive innovation capabilities. That model works for us. If you would ask my manager, she would probably admit that I rarely ask for permission to do something, but ask for forgiveness if something goes wrong. And that is what I expect from my team as well. I trust that they make the right decision. If it’s something new and innovative, nobody can tell if it will actually work out, so why waste the time to ask for permission? Just do it. If you believe people are fundamentally good, you should act like it. Be transparent and honest with your team, and give them a voice in how things work or don’t work. Create an environment where people can be creative and take risks and then, start to become invisible and just get out of the way.

Dr Frederik G. Pferdt is head of innovation and creativity programs at Google. He leads a team that helps Googlers solve anything creatively and trains people on how to build a better future through technology, fast. Frederik is cofounder of The Garage, Google’s hacker/designer/maker space and created the CSI:Lab (Creative Skills for Innovation), which develops innovators and generates new-to-the-world ideas with teams from YouTube to Chrome, the Noogler to Google [x]. As a lecturer at Stanford’s d.school he empowers students through user-centered, prototype-driven design. He was nominated as a visiting scholar at the Center for Design Research, Stanford University and research scholar at EdLab, Columbia University where he researched the convergence of design, technology and education. As the founder of LearningDesign:Lab, he ran award-winning design experiments for various groups from kindergartners to CEOs.