"Suffer a sea change into something rich and strange"

The art of storytelling weaves connections between organisations and their values. 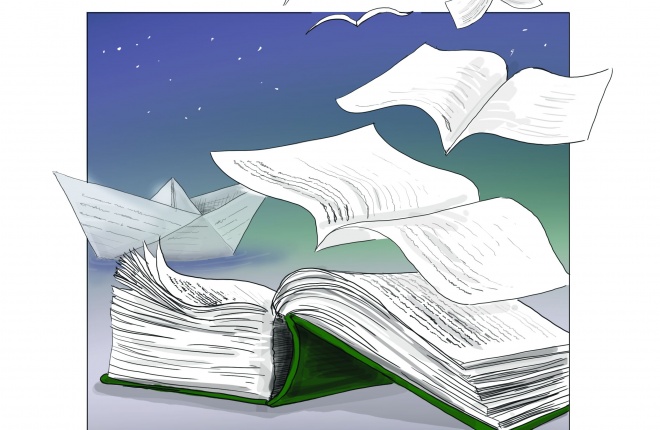 Shakespeare’s The Tempest provides us with a memorable and thought-provoking quote about risk (and the title of this article).

Full fathom five thy father lies;
Of his bones are coral made;
Those are pearls that were his eyes;
Nothing of him that doth fade,
But doth suffer a sea-change
Into something rich and strange.

But the play also invites us to reflect on the values, morality and redemption of its shipwrecked survivors.

Watching the play recently, I did what we all do when we see a good drama or read good literature – I began to reflect on my own near shipwrecks (I am a sailor), my values and even my mortality. In short, the play was a vehicle for making meaning of my life. It was not long before I extended this to my professional life too. How I try to achieve goals, avoid disasters, manage and motivate, take risks to transform, improve and change.

Communications is a fascinating process of how we structure thinking and language to create messages that achieve change – in attitudes, behaviour and perception. We know that the language of persuasion – in speech writing as much as in Shakespearian literature – relies on crafting not only words, but also structure. There are two distinctive “modes of thought” (as the American psychologist Jerome Bruner put it) to provide us with ways to structure experience and interpret reality. On the one hand, we use argument and evidence to convince us of the truth of that experience. On the other, we use narratives and stories to convince ourselves of its authenticity and verisimilitude – its ‘lifelikeness’.

How we come to know the ‘truth’ of our experience is not just an important question for philosophers and psychologists, but an important one for communication and public relations professionals. Bruner explains that one mode attempts to fulfil the formal-logical system of describing and explaining the world. It tries to assure us of verifiable paradigms, tests and reference points. This “paradigmatic mode”, as Bruner calls it, enables us to use theory, argument and analysis. We use this mode to research, plan and implement. On the other hand, our “imaginative mode” attempts to generate connections before we have any verifiable proof. This way of thinking leads not to facts and figures, but instead to “ripping yarns”, gripping drama and “dramatised” accounts of historical fact. Through narrative, we psychologically construct environment, as well as action.

Why can appreciation of narrative be so useful to professional communicators in corporate environments? Because narratives deal with the changing and changeable fortunes of the human condition with which we are intimately familiar. Every traditional fairy tale begins with a steady state of affairs that is somehow breached, bringing in a crisis to be redressed, and resulting in the restoration of legitimacy. Literature, drama and inspirational stories, render the world new and strange. They invite us to ‘fill in the gaps’ and create ‘brave, new worlds’. They enable us to draw conclusions from experience – even corporate experience. The ‘two modes’ of thought are reflexive and complementary.

At the Communicating Change conference, held in Vienna in March, our presentation tried to demonstrate the ‘two modes’ idea of thinking. We told two stories: first, the case study of our ‘unloved’ organisation struggling to establish itself and survive in an environment where stakeholder perception and engagement had for a long time been both negative and hostile. We recounted simple but plain evidence: audits, research, analysis, facts and figures, and summarised conclusions that resist contradiction and discourage dialogue. Our second story – an analogous tale – is one of the 20th century’s most incredible stories of courage and endurance and a classic of leadership and communication. Yet it was the discovery of this story, once understood and appreciated, that enabled us to fully reflect on our experience. We had been trying to interpret and evaluate a long, difficult and complex campaign – of change communication and re-branding – by reference to empirical evidence only. The discovery of this story changed all that.

In August 1914, the British explorer Sir Ernest Shackleton set out on an expedition to be the first to cross the Antarctic continent. With him were 26 men, 69 sledging dogs, a ship’s cat and, unknown to him at the time, a stowaway. When they reached the south Atlantic, bad weather delayed them for months, and dense ice floes crushed and sank their ship. The mission had failed. Now Shackleton and his men faced a desperate race to survive. They trekked 600 km across the ice to the uninhabited and totally barren Elephant Island at the northern tip of the continent. Surviving that was a remarkable feat, but it was only the beginning. The lifeless land could not sustain them, so Shackleton took a critical decision. He selected those with the skills, courage and belief to mount a rescue mission. To ensure the survival of all his men, he had to leave the majority of them behind. That was Shackleton’s strategy and his dilemma – to abandon the majority and focus on a minority – to ensure survival of them all. They rebuilt a lifeboat, a mere seven metres long. Shackleton chose five, and set out on a new journey to the island of South Georgia, across 1,300km of the world’s most notorious ocean.

Their journey was one of the most remarkable in the history of navigation and seamanship. With only basic tools – a paper chart, a sextant and a chronometer - they navigated their way through a hurricane and mountainous seas, overcoming unimaginable danger to reach South Georgia’s southern shore after 17 days. But that wasn’t the end, for the whaling station was on the north of the island. By now they had run out of food, plus what little water remained was foul. So Shackleton set off again over the tops of uncharted 3,000m glacial mountains on a 38km trek reaching the Norwegian whalers in 36 hours. With only 72 hours rest, he set off once more to rescue his 22 comrades left behind on Elephant Island. But the mid winter weather now foiled all his rescue attempts. It was almost four agonising months before he finally reached Elephant Island again in August 1916 – exactly two years since leaving London.

Why do we tell you this incredible story of endurance and survival? Because the General Teaching Council for England has one of its own. Though much less dramatic, it is for us, an analogy. The GTCE is the professional regulatory body for teaching in England, acting in the public interest to raise the status of the teaching profession. The GTCE registers all qualified teachers, regulates misconduct and incompetence and tries to engage teachers in professional development, support and advice.

Our hostile environment was not the Antarctic continent – it was 500,000 teachers who did not identify with the GTCE or confer legitimacy on it. They refused to register, refused to pay the fee and refused to respond to offers of engagement. While our journey was not 17 days in an open boat across a treacherous ocean, it did last more than five years, as we struggled to collect registration data, battled to collect unpaid fees and fought to engage hostile stakeholders in a mission that they would not endorse. Few teachers read our publications; fewer visited our website. We were failing to manage the perception of the organisation. Teachers saw it as ‘irrelevant’. Our survival was at stake.

In 2008, the public relations team took a decision – not as dramatic or life-threatening as Shackleton’s, but one of significant risk and critical importance. Like him, we decided to ‘abandon’ the majority of our stakeholders (those who would not engage with our mission) and focus our efforts on a critical minority – the 30,000 new graduate teachers who enter the profession each year. Why were they different?  First, they were not yet in schools and exposed to our tainted brand, well-established with older generations of teachers. Secondly, they were open to persuasion and engagement. Thirdly, their energy and enthusiasm might yet be channelled to endorse our mission.

The ultimate in rebranding

So, like Shackleton, we took a huge risk. We launched a campaign of potentially disastrous face-to-face presentations that engaged directly with this key stakeholder audience. Like his seemingly endless journey, we could only make painstaking progress. It would be almost 2020 by the time we engaged the majority of teachers. If this was a journey in changing brand perception, it was going to be a very long one. But like Shackleton, optimism was our courage. To succeed, our engagement had to be interactive and face-to-face. It had to create a narrative that would involve them in a critical but constructive perception of themselves. By being part of the process by which they construct professional identity, and feeling affirmed as it emerged, they might recognise the contribution the GTCE had made to that process. By being part of that narrative, the GTCE image might itself be reconstructed and re-branded.

We staged lively debates about the definitions and nature of professionalism – including frank and revealing anecdotes and stories about private and professional boundaries. We challenged them on their views, values and ethical standpoints: “How do you define a profession? How does the public perceive you? Are you a role model? If you are a good teacher, why does it matter what you do in your private life?” We engaged them in constructing a narrative of professional identity.

The presentations soon won widespread approval. We achieved 75 per cent reach, 98 per cent rated them “very good or excellent”, 100 per cent were “willing to recommend”, and 95 per cent changed from “I know little or nothing about the GTCE” to “I know how to describe what the GTCE does and why”.

Moral of the story

Shackleton had abandoned the majority of his men. But he sought to rescue them all by making the critical decision to select. Four months later, when he returned to Elephant Island, he found all 22 of his men alive. Great tales of leadership, communication and moral authority – such as Shackleton’s mission and Shakespeare’s Tempest – can be a source of inspiration for narrating your corporate brand. But narratives can also deepen the way you reflect upon, interpret, assess and evaluate. A disaster story turned to triumph is after all, the ultimate in re-branding.

Alan Newland has a background in teaching and lecturing, and has been the communications and public relations manager of the General Teaching Council for England (GTCE) since 2001. He presents workshops about the professional, personal and ethical dilemmas of entering teaching.