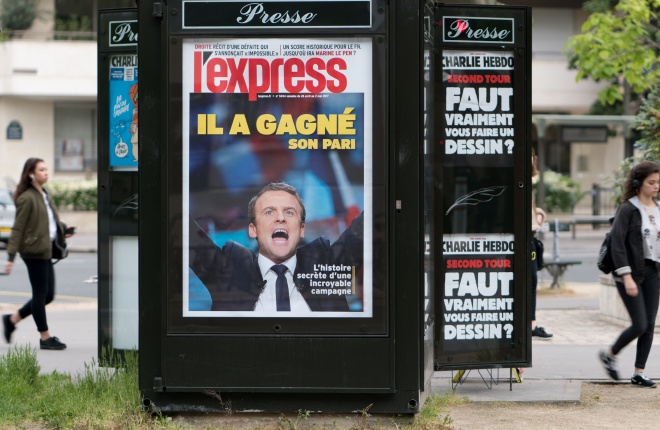 If my circle of acquaintance is anything to go by (and maybe it isn’t) France’s new president Emmanuel Macron seems to be more liked by the international community than many of his own countrymen. Politics aside, part of the reason could be that at his best he communicates in a way that is easy for many English speaking (NB not anglophone) audiences to identify and connect with. Below are three Macron communication traits that I think give him the edge.

In his book Don’t Be Such a Scientist, Randy Olson argues that all great communicators successfully connect with several different organs of the body – head, heart, gut and groin.  Macron doesn’t meet all these criteria (his set piece speeches can be tedious) but he’s physically forceful and animated during  interviews and 1:1 exchanges.

He’s not especially tall,  but he compensates for a lack of height with optimism, intense eye contact, forward focused body language and hand gestures that paint pictures as well as reinforce points. For example, during the 3rd May debate with Marine Le Pen, he used a piece of scrap notepaper as a proxy for a payslip to illustrate how one of his proposed employment tax reforms would work. He also counts items/issues off on his hands and underscores points very visually. A lot of politicians do this but few have the same businesslike, positive energy as Macron.

Why Macron won: he makes it tangible

One of the main criticisms levelled at Macron by his critics was his supposed lack of policy substance. This may prove to be true but he does use lots of tangible examples. I appreciate I am not glued to French TV but whenever I’ve seen him speak this is very obvious. In this excerpt from a TV exchange with French farmers he’s manages to explain why EU farming and trade policy matters to France in colloquial, visual terms by talking about exports of raw milk, Camembert and yoghurt and apples (in the South West) before moving on to wine and finally the impact that steel dumping by China had in the North and Eastern parts of France.

During interviews and debates Macron eschews more traditional methods of French political rhetoric, (which tend to be discursive before building up to a final conclusion). He gets straight to the point and is quick with sharp rebuttals and one liners that are not only highly quotable (incidentally, the French word for sizzle is le gresillement) but also jump language barriers. For example, during the above exchange with the same farmers he described himself as a ‘Européen exigeant’ (demanding European) and characterised Marine Le Pen as a ‘mensonge sur pattes’ (a lie on legs). And one of his most memorable lines from the debate last week was when he called her ‘La Grande Pretresse de la peur’ (High Priestess of Fear). This picked up headlines not just in France but all over the world.

Of course, several of the techniques I’ve just discussed are ones we teach. This is not to imply that Macron is some kind of crypto Anglo-Saxon politician in disguise. But part of his appeal may well be that as a smart energetic, concrete communicator with a direct style he is someone who can resonate with audiences outside his own country, even when speaking in his mother tongue.

A version of this article on The Media Coach website.