A continent in transition

Although Europe is showing signs of progress, imbalances in opportunities remain a defining factor for too many Europeans 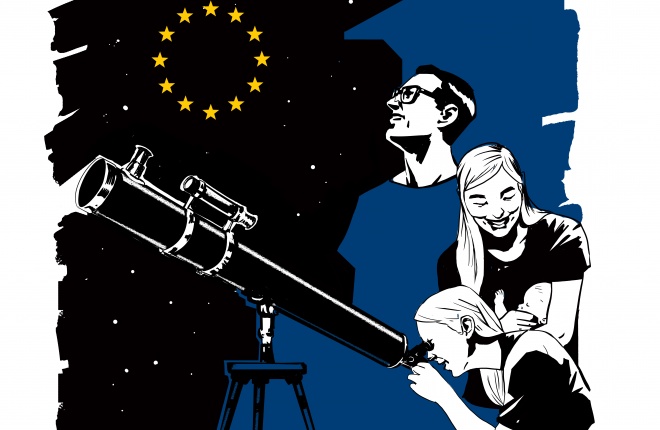 Europe is showing visible signs of progress: in most countries, labour markets are healthier than they have been in a decade, with more people in work than ever before, while social exclusion is declining.

However, it is also a continent in transition, where an imbalance in opportunities – depending on where you live or which particular social group you belong to – directly determines to what extent you have felt this recovery.

2017 was a good year for a number of European economies: more people than ever were either employed or looking for work – with the EU activity rate at a record high of 73.5 per cent in 2017. Unemployment continued to drop steadily overall in the EU, falling to 7.3 per cent, and even the perennially problematic issue of youth unemployment showed signs of improvement.

The recovery in growth and jobs contributed to an increase in disposable income for many people, resulting in a decline in feelings of social exclusion and an increase in living standards. Eurofound’s fourth European Quality of Life Survey showed overall progress in most dimensions of quality of life, quality of society, and  accessibility and quality of most public services, many of which returned to pre-crisis levels.

While these are undeniable achievements, other dimensions of the employment narrative are cause for concern, such as the fact that there are still not enough jobs for those in search of full-time work; that a relatively large group of people have become detached from the labour market, remaining economically inactive despite wanting to work; and that a substantial number of workers still struggle with relative poverty.

In some southern European Member States, economic growth has still not resulted in a full rebound from the 2008 financial crisis. Employment has shifted from south to north as a result of the crisis, with Germany and the UK accounting for most of the new jobs created in the EU between 2008 and 2016. Greece is far from having returned to a sustainable recovery, and jobs lost in Italy and Spain have not been fully regained despite recent growth. Somehow, the EU engine for convergence, which historically helped narrow the gap between Member States, seems to be stuck in first gear for some countries – in the case of Greece, it could be argued that it has stalled almost entirely.

"The crisis has also left a legacy of workers increasingly distant from the labour market."

Beyond unemployment, many workers want to work more hours. In 2017, 10 million people were working part time involuntarily. This phenomenon is concentrated in the lower-paid, lower-skilled end of economic activity. In the years following the financial crisis, 29 per cent of involuntary part-time workers were considered ‘working poor’. That was also the situation for 25 per cent of self-employed workers without employees.

Respondents to the most recent European Quality of Life Survey reported higher levels of optimism than respondents to the previous survey, conducted in 2011. However, as the figure below illustrates, optimism was much lower when they considered their children’s future.

Despite the overall improvements, disparities in quality of life are apparent among different social groups, varying according to gender, age, employment status and income. Differences are also widespread across Member States: countries that scored high on most indicators in previous waves also did well in 2016, while countries that scored poorly continue to do so. 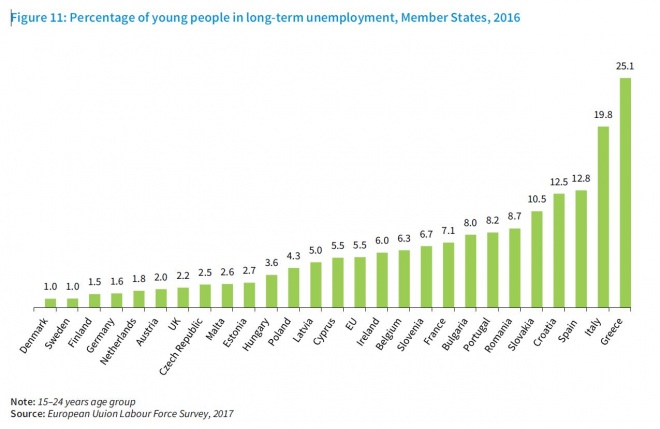 While tensions between most groups in society have decreased, there is a growing perception of tensions between religious groups and ethnic groups. In 2016, 38 per cent of people responding to the EQLS perceived a lot of tension between religious groups, an increase of 10 percentage points in five years. Likewise, 41 per cent of European Quality of Life Survey respondents reported a lot of tension between ethnic groups, four percentage points more than in the previous survey.

There is a lack of clarity in regards to immigration in Europe, and at times a disconnect between evidence and public perception. A special Eurobarometer report published in April 2018 found that a minority (37 per cent) of Europeans think that they are well informed about immigration and integration-related matters, and that respondents tend to grossly overestimate the number of non-EU immigrants in Europe. What is clear is that the integration of migrants and refugees is an issue of increasing importance in European politics and society.

"As quality of life and society has improved in several dimensions, so has trust in national institutions in many Member States."

It all seems that, even if the EU advances as a whole, lower optimism in the longer term, imbalances between countries and societal groups, and concerns about security, among other factors, have sewn the seed of the doubt about the capacity of the EU to secure a better future. Given the shrinking weight of Europe in the world and its declining proportion of the world’s population, it is clear that multinational cooperation is the sensible way forward, but history has shown that periods of integration are often followed by periods of geopolitical disaggregation. If the EU does not succeed in convincing the public of its ability to deliver for all, bridging divides between countries and citizens, many may turn towards populist and nationalist promises, ignoring the lessons from the past.

Back to social Europe

2017 marked 60 years since the signing of the Treaty of Rome. Over half a century later, the EU has managed to secure peace and freedom in Europe – a remarkable achievement that we too often take for granted. As the prospect of war and conflict, as well as challenges to democracy, in Europe has gradually receded from the consciousness of Europeans, people now want and expect more. The objectives are tangible prosperity and greater equality between countries and between citizens, values much associated with the so-called European Social Model.

The EU has understood this and has formally put Social Europe back at the top of the agenda. The European Pillar of Social Rights – proclaimed at the Gothenburg Social Summit in November 2017 – is clear evidence of this. Its goal is to rebalance the social and economic priorities of the EU to ensure the promised ‘social triple A’ across the Union.

" The EU has formally put Social Europe back at the top of the agenda."

Effective implementation is now the priority for the EU, the Member States, the social partners and all political actors. Sound evidence on which to base priorities and design better policies that reach all countries and all societal groups is necessary. Eurofound´s research programme Towards upward convergence 2017–2020 aims to contribute knowledge to support the practical translation of the principles of the Pillar into policies and practices that can improve the daily reality of Europe’s citizens. The objective of these policies should be not only to further improve the lives of people living and working in Europe, but to promote balanced progress that does not leave particular countries or individual groups behind, and to reassure the most vulnerable that prosperous and secure lives can be also expected in the long run for their children and grandchildren..

Juan Menéndez-Valdés was appointed Director of Eurofound in December 2010 and is currently serving his second  mandate. Eurofound (the European Foundation for the Improvement of Living and Working Conditions) is a tripartite European Union Agency, whose role is to provide knowledge in the area of social, employment and work- related policies. From 2015 to 2016, Juan Menéndez-Valdés was chair of the Network of EU decentralised Agencies.  In his earlier career, he served in leading roles at the  Spanish Confederation of Business and in the Spanish  National Employment Service. From 2007 to 2009, he was chair of the Governing Board of the European Centre for  the Development of Vocational Training.