Once apolitical and disengaged, a new class of European everyday activists is ready to fight for the values they hold dear, on- and offline 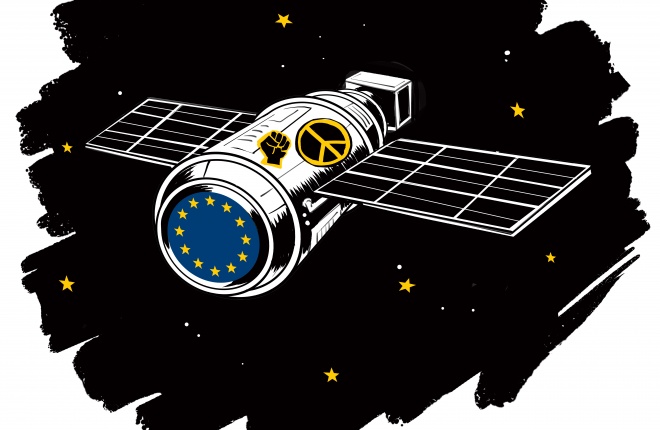 Imagine a whole stratum of the western population for whom politics and policy were once distant concerns – abstract concepts they did not feel really affected them.

Maybe they would pay attention sporadically or take note of a coming election, they might even have had a half-baked opinion about a big issue in the news of the day – but being engaged in a more than a passive way on an issue was really just asking too much.

“What happens if I don’t get involved in this? If I don’t say what I think?,” they may have asked themselves, only to conclude that things would probably still turn out fine, because common sense would surely still prevail.

In 2018 though, those formerly apolitical, slightly apathetic, “I’m-sure-someone-else-will-sort-this-out” types of people are no longer sure about that common-sense-will-prevail bit. They are witness to the daily crossing of cultural and political red lines – they see values core to their identity being violated by forces they never thought would enter the mainstream.

Once disengaged, they are now fired up and ready to act. They are a new class of European everyday activist and they represent one of the most exciting opportunities (and/or threats, depending on where you sit) that communicators from political institutions, NGOs, companies and trade associations face today.

From the US to the EU

It may seem strange to say, but to understand what’s happening in Europe it is easiest to start in the United States, which represents one of the best reported examples of extreme political and cultural polarisation in the western world. The country has long been a place where parallel cultures have divided the country, even if technology-enabled filter bubbles kept one side from learning about the other.

However, with the 2016 election of Donald J. Trump as president, we saw the crystallisation of a culture clash long bubbling under surface hurled into the mainstream. Ideas and communities once thought to exist only on the fringes were helped by a handful of cunning strategists and (unwittingly) by a few monolithic internet companies (and the odd Russian bot) into the centre of the American political landscape.

" Ideas and communities once thought to exist only on the fringes were helped by a handful of cunning strategists."

In a matter of months, many Americans saw issues like immigration, LGBT rights and environmental protection (to name just a few) tackled in ways that made them deeply uncomfortable. Conversely, some also saw the change they had long hoped would happen, but never thought possible.

In short, many people saw cultural red lines being crossed and decided they wanted to do something about it. Since November 2016 the rise of the right has emboldened the left and the two sides seem to grow bolder and more boisterous with every passing day. In fact, an NBC news/Wall Street Journal poll in March 2018 found that 57 per cent of Americans were fired up enough to engage in some sort of protest on both sides of very divisive issues.

While it may seem simpler to dismiss this as a uniquely American phenomenon, I would argue that the same cultural and political divides have either already clearly presented themselves in Europe already or are bubbling only slightly under the surface. Political pluralism helps soften the extreme polarisation (the US has two big political parties, European countries tend to have a lot more) so it is not quite as obvious as the US, but the same political and cultural fault lines are there.

A March 2017 survey showed that Europeans are also ready to protest, albeit in smaller numbers than their American counterparts. I would imagine more recent research would see an increase in protest-readiness, especially as the Brexit debate grows more contentious, driving even more polarising views about the European Union. Also, in countries like Hungary where politics increasingly present binary choices, we would likely see an even more fired up “resistance.”

While their precise motivations will of course vary widely, my sense is that these four points are generally true of a critical mass of this new class of activists:

So how does one point them in the right direction? One approach with a growing momentum is the ACE Framework put forth by Henry Timms and Jeremy Heiman in their recent book New Power. It suggests ideas spread when they are presented in ways that are Actionable, Connected and Extensible, meaning that organisations need to present activists with a clear, simple action to take and ensure that they can easily “remix” a message or campaign to make it their own.

Implications for the EU

With Brexit negotiations front and centre of the European news cycle, and the constant hum of Euroscepticism across the continent and hot button issues like migration unlikely to go away, the EU itself has become a polarising entity. Indeed, on top of the myriad cultural divides one might expect to find across the West in general, in Europe one’s belief or non-belief in the European project has become a question of personal identity and values.

This means that EU institutions will continue to evolve their communications approaches to defend their decades-old project while candidates for the upcoming European Parliament elections will be forced to articulate not only what they’ll achieve for their constituencies should they win office in Brussels, but also the very utility (or lack thereof, if it wins them votes) of the European Union itself. And the European everyday activist will be there to add fuel to the fire in both directions, perhaps in the form of an anti-EU Twitter troll or a self-ordained #FBPE champion.

With campaigns like #EUandMe and the EU roadtrip project, we’ve even seen the European Commission embrace the knowledge that it needs to take a lighter touch in pushing an EU narrative, going for a soft-sell approach that leaves third-party collaborators the space to remix the campaign and articulate what “Europeanness” means to them.

Just as in the US, NGOs and non-profits will experience an uptick in support around the key issues dominating public discourse. They have a huge opportunity to channel the passion of the everyday activist and are likely to use technology to further their efforts to build grassroots support and raise funds. New groups will be able to mobilise new communities on specific issues and grow faster than was previously possible in Europe, and for many European umbrella organisations fundraising will become an absolute must given the already apparent Commission funding cuts brought on by the disappearance of the UK’s contribution to the EU budget.

Outfits like eCanvasser and Rollout Democracy are just two examples of this new wave of enablers´who are pioneering technology-driven grassroots solutions in a uniquely European way.

Impact on companies and trade associations

Corporate activism, purpose, CSR: these are terms that have made the rounds in the communications world for years, but today take on new importance as companies start to weigh more seriously the business consequences of standing for something.

Hot of the press is a survey by Morning Consult of US consumers who were asked what role, if any, they want companies to play on societal and political issues. The survey shows that 60 per cent of respondents prefer that companies steer well clear of politics, but that (perhaps unsurprisingly) left-leaning younger consumers expect that the companies they deal with have a position on the issues they care about. While we have yet to see a pan-European survey of this sort, the FleishmanHillard Purpose Survey found that 75 per cent of UK millennials would take a pay cut to work at a purposeful company. Ninety-three per cent say they base their product preference on whether they believe a brand is purposeful.

As issues heat up, companies will increasingly have to take big bets – do they continue to be apolitical and keep customers or do they articulate their values and keep top talent? As AkzoNobel pubilc affairs chief Marcel Halma said at a recent talk in Brussels, we need better research in Europe to demonstrate the business impact of corporate activism if we want to see real movement on this in the short term.

On the EU lobbying front, we can expect similar waves of disruption even if they do arrive quite slowly and steadily in the way trends often do in Brussels. If candidate Members of European Parliament are held accountable by constituencies which are hyperaware of their values, why then wouldn’t these MEPs expect in turn that the companies and industry associations lobbying them would also stand for something?

The old lobbying narrative was very much one of “here’s how our industry will create jobs and growth.” The new narrative will inevitably need to include not only that bit but also a clear demonstration of how industry is helping tackling other issues MEPs will have campaigned on. Above all they will have to have an opinion about the European project itself that aligns with the MEPs they are lobbying and they’ll have to be prepared to share that opinion out in the open. Lobbyists who fail to bring a relevant message to the party may well be quickly shown the door..