Speaking out for Europe

By engaging citizens in public conversations, the European Committee of the Regions seeks to win back trust for the European project 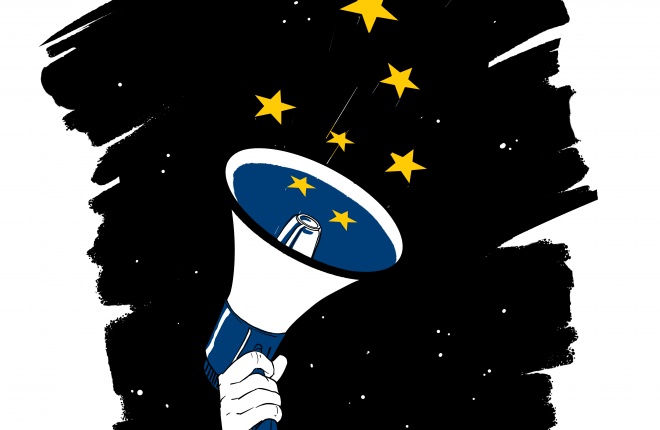 "The trust of the mass population can no longer be taken from granted, and any continuation of the 'grand illusion' is dangerous for leaders in today's world."

This was the main take-away from the Edelman Trust Barometer 2016. One year later, in a Special Eurobarometer survey for the Directorate-General for Communication, just 47 per cent of the respondents expressed their trust in the EU. This is a crucial indicator for the success of EU policies, programmes and regulations, which often depend on cooperation and compliance of citizens and a strong warning ahead of the 2019 European Parliament elections.

Reflecting on Europe, engaging with citizens

Technological disruption, economic concerns, breaches of security and a changing global landscape are just some of the reasons that insecurity is on the rise and trust is in decline. Yet, this phenomenon is widely recognised and needs political leadership to reverse the trend. In 2016, Donald Tusk, President of the European Council, turned to the European Committee of the Regions (CoR) for advice on how to restore trust in the European project. The CoR members therefore put listening and responding to citizens' concerns as a priority. This Reflecting on Europe initiative began with an invitation for members of the CoR – local and regional leaders – to hold events giving a space for people to share their concerns, opinions and ideas to co-create the future for Europe, for and with the citizens. By June 2018, more than 30,000 citizens participated in town hall debates across 81 regions and 114 cities and municipalities in Europe whilst more than 15,000 citizens took part in an online survey called Have Your Say on Europe.

According to the respondents, we can conclude that Europeans:

Citing a number of participants to local events and those who participated in the survey, a recurrent theme which will be of interest to communication directors is that "the EU is perceived to be too far from citizens" and that "too few efforts are made to improve general awareness" or to "provide reliable information on funding opportunities". While the CoR's insights cannot be interpreted as fully representative, this is a modest contribution to the wider debate on the Future of Europe and an indication of the thoughts behind those going to the polls for the European elections in June 2019.

Citizens' dialogues are by no means a new phenomenon. The European Commission introduced them in 2012 as a Contribution to Developing a European Public Space, in response to the decline of trust in governance and political leadership at both national and European levels in the wake of the financial crisis.

Experience has shown that such dialogues can effectively complement other communication activities, such as public consultations and social media outreach, by giving citizens the chance to have a say on the decisions taken at the European level. The debates also give politicians the opportunity to listen first hand to citizens, explain policies and point out the tangible effects of decisions on their lives.

Following the publication of the White Paper on the Future of Europe, the European Commission has organised more than 2000 public events aimed at opening up the debate to citizens, including over 120 citizens’ dialogues and over 60 visits to national parliaments. President Emmanuel Macron's proposals to restore the ties between Europe’s peoples and European integration through citizen's consultations means that these debates are likely to stay on the agenda in the run up to the elections. With this in mind, care must be taken to ensure that expectations are met by making the debates as open as possible and to provide enough time for all participants to express opinions. Moreover, there must be a feedback mechanism, which assures citizens that their points of view will be taken into consideration.

Informed decision making is a prerequisite for a healthy democracy

The Organisation for Economic Co-operation and Development has long argued that governments need to be more inclusive, transparent, receptive and efficient to meet citizens’ increasing expectations. Indeed, access to reliable information performs a crucial role in a citizen's ability to play an active part in a society and successfully participate in the labour market. Modern and efficient communication clearly has its role to play here. And, when combined with longer-term solutions to major societal challenges, greater foresight to avoid future crises and a true sense of inclusion and participation, there is an opportunity to restore trust in the European project.

"Access to reliable information performs a crucial role in a citizen's ability to play an active part in a society."

Ensuring public support in times of societal change requires a clear, coherent and critical vision of the essentials of information, communication and dialogue, as well as of the limits of each of these components. The EU's communication deficit has been widely documented, but perhaps it has become too easy to blame the institutions for a failure to communicate. From the European Council to the Committee of the Regions, all EU bodies are working to improve transparency and the free flow of information through a greater publication of documents and press releases, the reaching out through public consultations, the translation of their work into all EU languages and more engaged communication.

"The EU's communication deficit has been widely documented, but perhaps it has become too easy to blame the institutions for a failure to communicate."

Yet we must also respect the fact that EU citizens live busy lives. As Emily O'Reilly, the EU Ombudsman, expressed it in a hearing of the European Parliament Petitions Committee on 22 June 2017: "EU institutions need to be open not so that every single citizen can be fully informed all the time about the minutiae of what’s going on, but rather that their elected representatives… are fully aware of what’s going on and can act accordingly in their interests because of that knowledge."

Encouraging local champions to speak out

The European Parliament elections are the primary articulation of European democracy. However, since the first direct elections to the European Parliament, voter turnout has decreased continually from almost 63 per cent (1979) to 42.6 per cent in 2014. These figures, together with a rise in support for populist parties, point to a further indication of the distance EU citizens feel between their daily lives and the decisions taken by their representatives in Brussels and Strasbourg. However, as proclaimed at the 60th anniversary of the Treaty of Rome last year, the European Union has achieved a lot in its short history: from restoring peace and granting freedom to launching a successful single currency and establishing shared values that are respected around the world. It is high time for Europeans to be proud of this success and tell the story in a way that resonates with the 500 million individuals living and working on the continent.

More engagement is undoubtedly needed by organisations at local, regional and national levels, as well as from civil society. In its communication strategy for the next elections, the European Parliament Bureau highlighted that this will be a "European Union campaign", which makes use of the higher levels of trust in local and regional representatives. Indeed, as most citizens rarely lift their gaze beyond their own borders (as highlighted by the Reflecting on Europe initiative) the EU should make itself better known to its constituents by establishing a greater presence on the ground and forging more links at local levels. This can be achieved by encouraging local and regional champions to find innovative and attractive ways of talking to citizens and putting them at the centre of their actions. Believable protagonists and stories from people belonging to our own networks can contribute to an EU that is established in people’s hearts as well as their minds.

To conclude, the only way to rebuild trust in the European Union is for our elected representatives to earn it. This can be achieved by providing citizens with the necessary information and means to fully participate in their society and European democracy as a whole. Citizens' debates and consultations can make an important contribution to this aim..