“These people are on the edge of humanity.”

In 2016, refugee and migrant deaths in the Mediterranean hit an all-time high: what’s the reality behind the numbers? 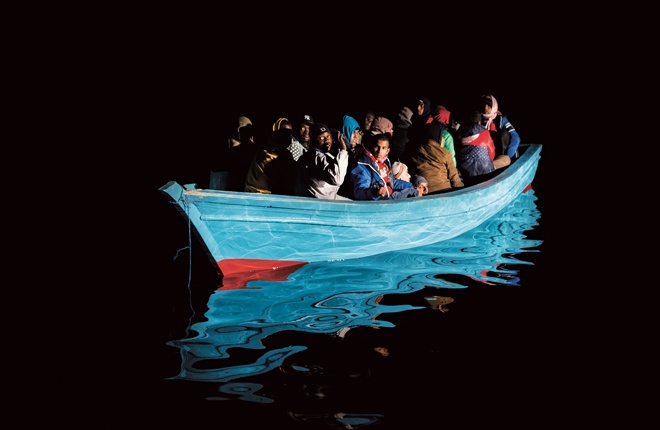 In 2016, the number of deaths of refugees and migrants crossing the Mediterranean hit an all-time high. Among the NGOs that patrol the area with rescue ships is SOS Méditerranée: we spoke to its communications officer about life on board the MV Aquarius, the reality behind the numbers, and the challenges of working in a cold political climate.

How does your day begin on board the MV Aquarius?

We are three teams, the SOS Méditerranée team, MSF Doctors Without Borders, and the crew of the company that owns the boat. We meet every morning at 9:00 to view the weather forecast, and according to the forecast we can see whether we will have a rescue or not that day. For a rescue, the sea has to be flat, and when we see a green-blue colour we know almost 100 per cent that boats are going to leave the Libyan shore. We organise a watch schedule on the bridge to look out for possible embarkations.

Sometimes these watches are interrupted by calls from the Maritime Rescue Coordination Centre in Rome, informing us of a position which we have to go to for a rescue. Sometimes the migrants call them with a mobile to say they are in distress, sometimes they have information from flights over the zone, and sometimes we spot the boat with the binoculars. We never know what’s going to happen.

SOS Méditerranée is international, with head offices in Italy, France and Germany: what are the implications of working across this international network?

The Italian coast guard coordinates all the rescue operations because they have a lot of experience. All the humanitarian search and rescue missions were created after the end of Mare Nostrum – the year-long Italian search and rescue operation that was launched after the Lampedusa shipwreck where 400 people died in October 2013. Now there are many NGOs operating during the summer in the area.

The Italian coast guard coordinates everybody so that we can rescue the most people possible, ensuring we are not three ships rescuing one boat but instead we’re all dispatched effectively. It’s a lot of cooperation. It makes our work easier and more efficient. We manage to save more lives when we work together.

What’s the largest amount of people you’ve rescued from one boat?

We found 195 migrants on a rubber boat – that was a record for us. We had never seen that many people on one single embarkation. It means eight to 10 people on one metre square of plastic that is fl oating on the sea. Most embarkations don’t have compasses, they don’t have lights, people don’t have life jackets – they are just sent to sea. Although we see different types of embarkations, wooden boats that can carry from 200 to 400 people on average are common. But in October we rescued a wooden boat with 722 people on board. People were packed into different levels inside the boat, people from Eritrea and Somalia.

These boats will never make it to Europe in the condition that they are pushed to sea by the smugglers. It’s completely inhuman. There is absolutely no possibility that they will arrive in Europe. How mixed are the motivations of the people on these boats – are there willing and unwilling, smugglers and victims of smuggling, people escaping to find work and those being forced into prostitution – and how do you recognise the mixed motivations? We can never know.

Usually the smugglers aren’t crazy, they won’t go on these boats because there is a great chance that it is going to sink. After five or six hours of navigation, it will break and water starts to come inside the boat. They know it’s very dangerous. So it’s highly unlikely there are smugglers on the rubber boats. But you can never know who those people are. I can tell you, from what I see, they are all desperate people. Of course, we don’t differentiate – a life is a life.

People who need help, who risk drowning in the Mediterranean, we have to rescue. Afterwards it’s not our mission to differentiate – the sea doesn’t differentiate between smugglers, migrants, economic migrants or refugees – those people are going to drown, they are going to die. We rescue all of them. Then afterwards it is not our responsibility. 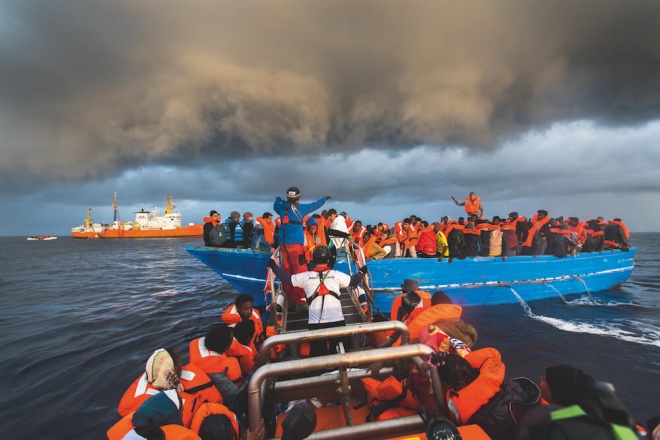 As a rescue ship your responsibility ends when you bring these people on shore. Do you have any interaction with the process that follows?

We try to cooperate with authorities to protect people who need protection. Most of the people we rescue are highly vulnerable. Most of the women are victims of trafficking and have been raped. Many of the people we rescue have been victims of violent torture. They are completely lost, they don’t even know where they are. But we have no real power from the moment the migrants disembark, pass the gangway and touch land in Europe.

Then they are under the responsibility of the Italian and European authorities. It’s always a very moving moment when you get back to the port. When you have rescued these people, you have spent two or three day on a boat with them and see them leaving, you hope for the best but you know it is not the end of the journey.

Do you feel the political climate in Europe has become more or less favourable towards this kind of work?

We are not a political organisation but what we can see is that European citizens have to collect money and charter ships to go to the rescue of these people, because the European state will not do it. In the political climate we can see the growing xenophobia, the anti-migrant and anti-refugee climate. But, at the same time what I see is that there are also a lot of young citizens that support us and say we are doing a great job. They understand. There is also a big gap between reality and what we see in the media. I have been working in Italy for 10 years as a journalist for French media in radio, television and newspapers.

It’s been 10 years that I have been reporting on migration – about arrivals of boats in Italy, Lampedusa, in Sicily, I have reported on shipwrecks, I knew about the regulations, the difference between refugees and economic migrants – I thought I knew the reality. But then, when I saw the first rescue with my eyes: a disembarkation with people completely lost at sea with no life jackets, I learnt that I didn’t know anything about their treatment and the horror of what they had been through in Libya. I didn’t realise that behind all the numbers we are given in newspapers – the newspapers mainly report numbers – are the stories of the people. This was really overwhelming.

Some critics say that migrant rescue ships operate as a pull factor, that their presence somehow encourages more migrants to risk these journeys. How do you respond to this kind of criticism?

If there were no rescue ships the crossing would still continue. Before there were no rescue ships so we didn’t see the reality. There was nobody on the sea to rescue, to document, to testify about the situation. Our mission is not to fight against trafficking of human beings, our mission is to rescue people at sea. What we see is that so many people need help. The solution is not up to us. We are just trying to help people not to die at sea.

We are the only rescue boat at sea in the winter and the crossings continue. Already, since the beginning of January, 200 people have died, many have been rescued. If there were no rescue ships the crossing would continue. Do we decide to let the people die at sea? This is choice I am not prepared to make.

What kind of communication tools have you found to be most effective for an operation like Aquarius?

The humanitarian rescue boats introduced a new window for this phenomenon. For so long there were no images, no footage, no pictures, no reporters at sea to record what was happening. But now many photographers are coming on board, as well as film makers and journalists. Now we can document the reality. The pictures have a huge impact. Many search and rescue NGOs were created after the picture of Alan Kurdi, the child on the beach. The discussion around this picture woke up public opinion. Maybe for the first time we could see a picture that was totally unacceptable: a child, drowned because his parents were looking for a better place to live and were fleeing from war.

The power of pictures is definitely important and we constantly have a photographer on board. They are volunteers as well, photographers who put their careers aside for three weeks and come on this ship to document and to show what is happening. Also of course television is very important. Do the television crews accompany you on every trip? Usually we have one television crew on board. We have many nationalities: from France, Germany, Brazil, US and also from Al Jazeera. We always welcome journalists to come on board to broadcast what is going on.

Previously, we sometimes had footage of people arriving in Lampedusa, but now we have television crews coming on board and reporting every step of the rescue, and there is the opportunity also to talk with the rescued people. This changes things, because sometimes if there is no image or footage there is no news. We have to document the situation with audio, video and pictures. 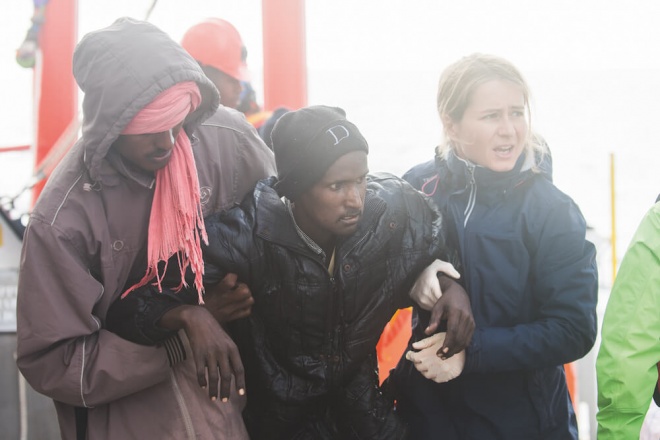 You’ve worked as a journalist for French news in southern Italy for 10 years. What made you decide to take up this position on board the Aquarius?

When I was reporting about migrants I always felt I was only reporting the surface of the problem and I wanted to go deeper. I was also tired of being cynical. I worked for a press agency and they would rarely report about the tragedies or the migrant arrivals. When the arrivals numbered 1500 it was not enough to report on, we would report only if there were dead people or if there were 1000 arrivals during one day. The link with humanity was lost, because behind the numbers there are humans as well.

After a while I felt very uncomfortable. I wanted to go to see the reality. At first I wanted to embark as a journalist for three weeks but then I was asked to become the communications officer for SOS Méditerranée.

When will you stop? It must be a very emotionally draining job. Are you giving yourself a deadline?

The more I come on the ship, the more I want to stay because it’s an amazing professional and personal experience. I am living a pure human experience. These people are on the edge of humanity. They are not treated like humans. They are pushed at sea in terrible conditions, then when they come on board we give them back dignity, ask them questions, conduct interviews, consider their stories. Listening to them is giving back dignity to those people. It fills you with a lot of positive energy and hope for the future. But the phenomenon is not going to end tomorrow. Maybe at some point I will have to leave and maybe file the story from land. But this is a real turning point for me.

Mathilde Auvillain is communications officer for the SOS Méditerranée. Before taking on her current role on board the MV Aquarius for SOS Méditerranée, she worked for French media as an Italy-based correspondent: among these were Mediapart, Radio France, Ouest-France and Agence France Presse (AFP).