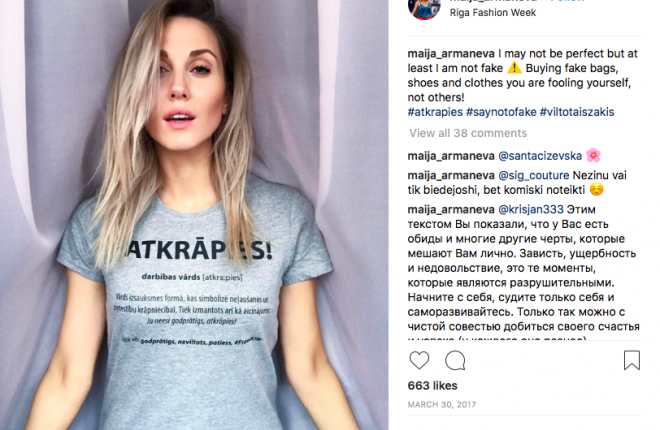 In Latvia, fraud is a serious problem. According to a 2017 study by marketing and public opinion research centre SKDS, 66% of Latvians indicate a high level of unfairness in the country, with more than half of the population exposed to some kind of unfair practice over the last three years.

For example, it is estimated that counterfeit products cause a loss of 141 million EUR per year for the Latvian economy.

(Main Image: Social media influencer used as part of the campaign / Photo: Ministry of Finance of the Republic of Latvia)

The situation is complicated by the fact that the attitude of the Latvian society towards fraud is not wholly negative: the purchase of counterfeit goods or tax avoidance tends to be perceived as an act that is not just an occasion for condemnation, but worth boasting.

In order to change this situation, around 20 leading state and non-governmental actors involved in the fight against fraud have joined forces to promote zero tolerance towards fraud in society.

To achieve this objective, we set a short-term goal of raising public awareness about the consequences and impact of fraud, and to promote understanding of anti-fraud measures.

Since people aged from 16 to 34 are identified by studies as being more likely to be exposed to some kind of unfair practices, we prioritised this audience when launching our communication activities.

The long-term nature of the campaign and the diverse types of fraud prevalent in society inspired us to develop not just a communications campaign, but also an entire movement against fraud. In order to shake up people’s comfort with low-level fraud, we deliberately chose a strategy of provocation in order to attract attention. We looked to the theory of self-persuasion to help build our engagement strategy.

We began with a social experiment. Celebrities attended public events wearing clothes with visible price tags, indicating that their clothes were counterfeit. As soon as we had captured public attention, the movement was officially launched. We even created a neologism, #Atkrāpies, that in English sounds like #FraudOff!

Within the framework of an integrated campaign, we sought to educate Latvian society through the movement’s website, outdoor advertising, social media, public exhibitions and cooperation with influencers. Active media relations included press conferences, dozens of individual interviews and hundreds of press releases, all spread by the various organisations involved in the movement. The social media reach exceeded 1,157,133. The potential audience of traditional media (100+ publications) - 15,933,067.

On the launch day, official hashtag of the movement was the most popular in Latvia. The FraudOff neologism was nominated in The Latvian Language Advancement Group’s nominated Latvian Word of the Year 2017 survey.

Our audience liked the message and helped spread it. Almost a year after the launch, a survey demonstrates a change in Latvian society’s attitude from moral support of cheating to recognising it as a major problem.