Opening up the office

Microsoft believes so strongly in the benefits of a more flexible approach to work styles,it organised a special day to evangelise on the subject. 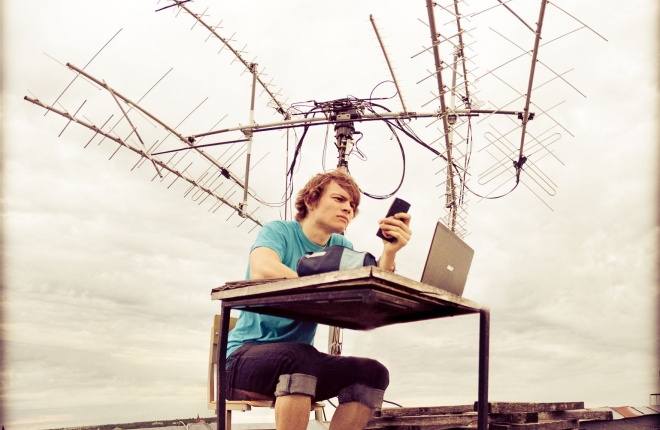 Today, information technology enables many professionals to carry out their tasks outside the office – far, far outside, as the case may be - and take a giant leap towards an improved work-life balance. Although the technology may already have arrived, wide-spread acceptance is still lagging behind, with companies hesitant to establish official flexible work style policies.

As Sean MacNiven, head of communications innovation and infrastructure at multinational software corporation SAP, wrote in the most recent issue of Communication Director, “The cloud enables stakeholders to connect, independent of time and space.” This is backed up by the experts at Microsoft, who agree that cloud services make it possible to have more flexible ways of working.

Last year, Microsoft Baltics built a whole campaign around the idea of showcasing the benefits and rewards of embracing the new technology and adapting a more flexible attitude to work locations. For their Work From Anywhere Day on May 31, Microsoft Baltics invited people in Estonia, Latvia and Lithuania to work outside their everyday workspaces. The goal was to raise awareness and drive public discussion on the topic of flexible work styles; the official message was: “Technological solutions (laptops, smartphones, cloud technologies) and fast internet allow work practically anywhere. This means that people can plan their own work-time, which increases efficiency and employee happiness. On Work From Anywhere Day, you can try out working from anywhere yourself.” As Raine Laane, head of Microsoft Baltics, explained to Communication Director, there are tangible benefits to allowing people to work from home: “Microsoft believes that people make the business successful, and in order for them to be happy in their jobs we need to cater to their needs.”

The technology that could enable this dramatic shift in working life, Microsoft’s cloud-based Office 365, arrived in the Baltics towards the end of 2011. However, the company felt that the full implications and advantages of the technology’s ability to, as a press release puts it, “enable a seamless work experience from all devices and locations”, had not been grasped. The event on May 31 was planned to raise awareness. Rather than focus on the technological aspect, the campaign talked about the change of mindset necessary in order to effect such change. In particular, the campaign wanted to overcome the main obstacle, namely: trust. “One of the hardest things for managers to let go of is control,” explains Lanne. “Many believe if they see the employee at the desk from nine to five pm every day they can be sure that they are working. The reality is different. Employees expect to be trusted, and if they experience trust instead of constant control they are more motivated to work, improve their results and are more loyal to their employer.” Laane is living proof of the kind of changing attitude made possible by the successful implementation of flexible work styles: he admits that, during the first year of its introduction at Microsoft, “it was strange to come to the empty office and it did make me wonder. However, when I saw the good results of our teams, all my doubts disappeared. Work is just one part of our lives and it needs to fit well in the big picture.”

When asked why Microsoft chose not to stick to the technology involved – which is, after all, its source of expertise – Laane explained: “The greatest challenge is to change the mind set. However, if people see benefits from working from anywhere and flexible approach to work, they are more likely to look for technological solutions to support them. They will be more motivated customer for us. We believe it was the right approach.”

Collaborating with Microsoft on the campaign in Estonia was JLP, a communications agency based in Tallinn, who helped the company plan a set of media activities beginning in March 2012 (the campaign was supported by MRS Grupa in Latvia and by Integrity in Lithuania). These activities included a press release campaign, a seminar and press event, as well as media interviews. Backed up by social media messaging, the team organised an “inspiration day”, a chance to explore the principles of distance work and the supporting technological solutions. According to JLP, this attracted representatives from more than 150 non-governmental organisations and small enterprises.

The campaign also featured the participation of more than 20 partner organisations as project partners. Karita Sall, general manger at JLP, told Communication Director: “We invited partners who already believed in the concept of working from anywhere. We wanted to present cases from both the private and public sector that could speak from their experience and share their victories and challenges. We also included telecommunications companies who provide technological support in products and services that make working from anywhere possible.”

Microsoft and JLP estimate that the Work From Anywhere Day on May 31 featured an estimated 4,000 participants – including participants on Facebook and from partner organisations. Further, they calculate that the event received roughly 115 pieces of coverage altogether in the Baltics, including online, print, radio and television.

Still not convinced of the benefits of flexible work styles? Research conducted by Estonian group the Smartwork Association found that working from home has a number of positive benefits for the organisation, not just the worker, including the improvement of employee motivation, dedication and loyalty to the company. As Raaine Laane explains, “companies need their employees to be flexible – to go on business trips, occasionally work overtime or at weekends, work with teams in different time zones. As to the employees, they need flexibility mainly to balance their business and private life be it their family and children’s needs, hobbies or health.”

Karita Sall agrees: “There are certain areas where working from distance is not possible”, she notes, “however, the knowledge-based economy is driving society towards new ways of doing business….the Facebook generation is entering the labour market. Interaction via computers and internet is so basic for them, it is a challenge to explain to them why they need to come to the office if the same work can be done from wherever via modern technology.”