A word from the candidates 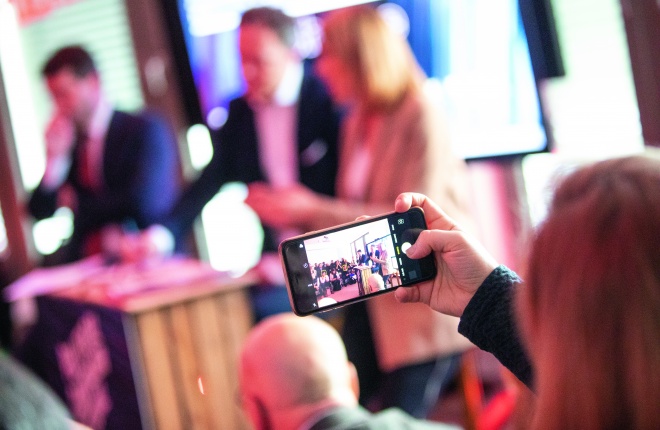 The European Parliament elections in May this year promise to be decisive for Europe, with forecasts suggesting that anti-EU populist political parties will challenge the incumbent mainstream parties.

Dara Murphy and Utta Tuttlies are at the forefront of two of the largest parties in the European Parliament: here they outline some of the challenges and talking points of their election campaigns.

(Main image: An attendee of the Political Campaign Festival (Berlin, 30 January 2019) snaps (left to right) Dara Murphy, moderator Professor Mario Voigt, and Utta Tuttlies during their session at the Festival, on which the following comments are transcribed / Photo: Jana Legler)

The main challenge we face is to make people understand that these elections matter, including people who do not study politics or read the political columnists in the newspapers. The Brexit vote clearly shows what can happen when people are misinformed.

The European elections are a historic chance for people all across Europe. If we get that wrong, if either too few people vote or too many are influenced by fake news – and we know that disinformation influence into the campaign is now a big topic – we will have a serious problem. So that I think, is the main challenge: a) getting people to vote and b) getting the message across.

In today’s world, the challenges for traditional parties is manifold.

The first is a political challenge. We are seeing concrete threats to the European idea, to the European project, that we have not seen since the first direct elections to the European Parliament in 1979. In Germany, the AfD party has come up with the idea of Dexit, other  parties have announced that their idea is to destroy Europe and get it back to the nation states. We have many more parties like that in many European countries, as well as from outside Europe. We know that Steve Bannon and his friends are trying to influence from outside, to destroy the European project and we see with Brexit for the first time that disintegration can become a concrete reality.

The second challenge are the structural and societal changes. We see many more parties being established; trust in traditional parties going down, and personalities mattering much more. However, we also see, with Macron and others, that it is not so easy to be a strong personality and create a new party in a short time. So maybe we can talk about the complexity of democracy and the need for compromise, which is often not recognised by populists who see the world in very simple terms, and want to sell this in very simple terms.

The third challenge is the technological challenge, and the influence of social media. For people working in these European  elections, it is crucial to a) get the message across online and b) be aware and take action within the legal framework to fight against fake news.

This brings me to the fourth challenge, the political content of our campaignt: we need to talk to people about why they do not believe in Europe, or why they want to vote for parties that aim at leaving the European Union. The S&D Group will stand up for Europe, but we also say we want a different Europe. We want a Europe that works for the people, whic leaves nobody behind, and thus we have to work on the root causes of why we have the political crisis today. Alongside our digital and traditional media work, we have launched direct engagement tools and our #EuropeTogether initiative, going to the streets, going to the people, going not only to the capitals, going to the small cities, to the local level – that is what we need to do. In addition, I know that our lead candidate Frans Timmermans, will run a positive campaign against the fear of the extremists, nationalists; and he will run a campaign of optimism.

When the EPP talks about what we communicate, how we communicate, when we communicate and even where we communicate, we always have in mind the electoral system that we have in Europe. With the exception of where the lead candidates are on lists, people who vote in the European elections will vote for member parties in the first instance.

However, all of our research is showing that the gap between what used to be called ‘second order elections’ is starting to close. This means there is more relevance for Europeans now in these upcoming European elections than was the case in 2014. And while Social Democrats or the EPP could clap ourselves on the back and take some comfort from that, the reality is that the challenges and issues that people are facing are driving them towards looking at whether European leaders can provide solutions for the challenges which I think they instinctively believe require more cooperation to solve.

So whether it is in respect to climate, whether it is in respect to challenges around security, whether challenges around migration or economic challenges, we want to show that our political family, and Manfred Weber, can deliver a European campaign on the issues that concern people most. We want to show how we can bring a further evolution to European politics compared to what we had in 2014.

In 2014, many of the political families agreed to the new concept of a Spitzenkandidat, a lead candidate. We are strongly supportive of this because we believe it's a strong step in continuing democratic legitimacy for people on the continent.

When Frans Timmermans and Manfred Weber travel around the continent, listening, engaging and debating with people, they are also laying a platform before the people of this continent that they will be held accountable to if either of them is successful in leading the next Commission. And this is a new normal in how politics work.

There are examples right across the democratic world where a politician and a political party – or political family of parties, in our case – lays out their vision for the continent, has that vision debated and then consequently is accountable for what they've said. It is semidetached still in the European Union, and detractors of the Spitzenkandiate may well say that it's not a perfect political configuration; and I don't believe it is, but it is a step in the right direction, since in the past we have had a situation where only 28 heads of state and government – democratically elected, yes, that is true, and though with the best of intentions – sat in a room together and picked the next leader of the European Commission. Today, there is a direct link with people, with the voters.

We see two distinct elements to our campaign. You will see a very robust campaign from us in calling out the populists and extremists, to not just point out what they don't like about European politics and the failings that we all acknowledge there have been and the improvements that we can make – but to tell us exactly how they believe they could do it better.

"You will see us calling out the populists and extremists, to not just point out what they don't like about European politics but to tell us exactly how they believe they could do it better."

Because to call for leaving - and there is a fairly glaring example to the east of my own country – where simply walking away without a strategy, is a very, very shallow and a very dangerous strategy to be approached by any political party. But equally  we will run a positive campaign with the Socialists where we will debate how and where, within the context of our European Union, we have a difference of opinion on policy with the Socialists and with the Liberals and with the Greens.

Utta Tuttlies took up her current positon as head of press and communications/ spokesperson for the S&D Group in the European Parliament in 2010. With 194 members from 28 countries, the S&D Group is the second largest political group in the European Parliament. Previously, Utta was head of communications and public affairs for the Association of Commercial Television in Brussels. Before that, she worked as a political consultant in Brussels and as a media relations advisor in Germany.

Dara Murphy is an Irish MP and a member of Ireland's government Party, Fine Gael. He was first elected to the National Parliament in 2011, and from 2014-2017 served as Minister of State with responsibility for European Affairs in the Irish government. He also had responsibility for Data Protection and the Digital Single Market. He  was elected in 2015 as Vice-President for the European People's Party and was recently appointed to the position of EPP Campaign Director for the 2019 European elections.