A special edition podcast from the European Communications Summit. 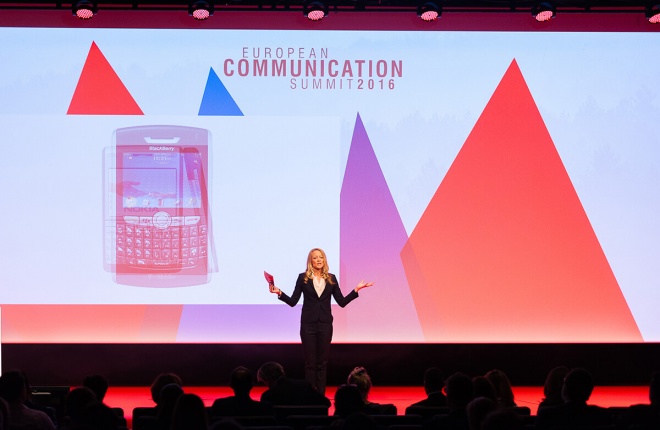 Show 28 of the csuitepodcast was recorded at the European Communications Summit in Brussels where Russell Goldsmith interviewed three of the conference’s speakers. In this first section, he spoke with Elaine Cameron who is a Futurist and Senior Director at Burson-Marsteller about "Gender Balance in the Workplace."

Elaine has been tracking signals of change for eight years around women’s empowerment – politically, technologically and economically. She gave an overview of the trends that are driving gender balance in the workplace.  For example, women now:

She added that we have also seen landmark legislation being passed around the world on pay parity and transparency on pay and women’s paternity leave.

However, Elaine said that barriers still exist to women in the workplace due to a number of reasons including:

In the week before the conference, actress and activist Emma Watson had been interviewed  discussing the #HeForShe campaign and her support for positive discrimination to address the imbalance for women.  Elaine shares this opinion.  She explained that we can’t wait 200 years to allow this to happen holistically over time, [according to a study undertaken by LeanIn.Org and McKinsey ‘At the rate of progress of the past three years, it will take more than 100 years for the upper reaches of US corporations to achieve gender parity’].  Elaine said that even Christine Lagarde, Managing Director of the International Monetary Fund, recently said that she doesn’t see how else we are going to achieve gender balance.

In her session, Elaine showed a really powerful video (below), produced for the "Inspiring the Future" campaign, run by the charity, Education and Employers, that highlights the issue that gender stereotypes are formed at a very early age, between the ages of five and seven years old.

Elaine therefore believes it’s the responsibility of the parents to bring up their children in a way that is gender neutral.

To further address the issues Elaine was discussing, Burson-Marsteller has launched their Advantage Women campaign, which is a global offering focused on helping organizations take full advantage of the benefits associated with closing the gender gap and creating more opportunities for women to rise as leaders.

Jeremie was at the event talking about a report he’d just released in collaboration with Communication Director, Navigating Social Acceptance, which looks at how and when organisations are recognised as meaningful contributors to society.

He explained that Social Acceptance has broad support from a range of stakeholders including the General Public and that in producing the report, Black Sun had tried to break down the various steps an organisation can take to unlock Social Acceptance, which include:

The findings of the report, however, showed that there are a number of gaps that remain in the above. For example, approximately 86% companies they researched have a clear knowledge of who their key stakeholders are, but that very few actually collect their feedback, or do anything with that knowledge to the benefit of their business.

Jeremie’s two key tips to achieve Social Acceptance are to:

On that second of the above tips, Jeremie said that too many organisations are keen to consult and listen to stakeholders, having asked them to input on their strategy and communications, but then let them down in the delivery. You have to remember that having asked those stakeholders for input, you are accountable to them, and so have to let them know what you have done with their feedback.

For his final interview, starting at 13min51s, Russell spoke to Mazen Nahawi, CEO of Media Intelligence Agency, CARMA, who had presented a session at the conference on the topic of Tribal Relations, which was looking at how understanding of trust will change amidst the failures of political communications.  This was quite a timely talk following the result of the Brexit referendum in the UK and the backtracking that followed from both sides of the argument.

That was an impressive talk by @mazennahawi at #ecs16 on the emergence of modern tribes. Putting the R back in PR. pic.twitter.com/0x93STJaZ4

Mazen’s talk was about how people are coming together around ideas, interests and passions rather than gender, ethnicity or location.  They can be transnational and multicultural, but the key aim is that they want to achieve a particular goal, whether political or social.  As well as what was going on in the UK politically, he said it was also quite pertinent in the current US elections as well as what has happened in the Arab Spring in the Middle East and so it’s very much a global phenomenon. He added that it’s therefore important to understand what brings people together and what drives them, which is what CARMA are trying to achieve with their research.

Mazen explained that CARMA are trying to take measurement to a different level with their Tribal Relations research.  He said that traditionally, the [PR] industry has focussed on clip counts, advertising value equivalency (AVE), etc., but his company believes the csuite requires data that is much more in-depth and needs to have a historical, business and psychological context, rather than just media analysis and opinion data. He believes that by blending it all together, you get a holistic view and a better understanding of the people you are trying to serve.

A version of this article originally appeared on the Csuite Podcasts website. You can keep the conversation going on Twitter around these podcasts using #csuitepodcast. To connect with Russell head to LinkedIn, follow him @russgoldsmith or contact him via the Audere Communications website.