Read all about it

A new online newsroom for Adobe 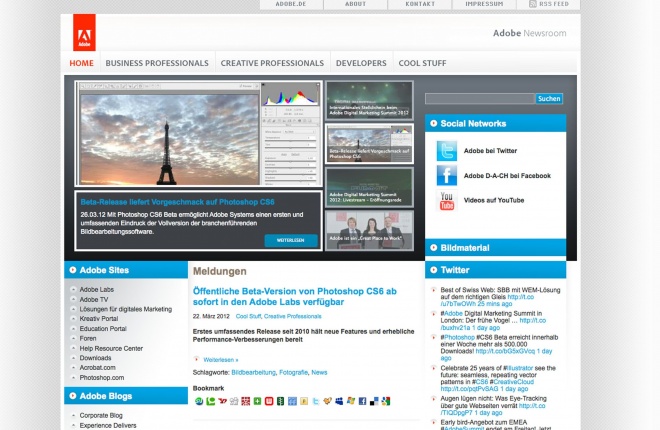 Online newsrooms are making news for themselves around the world.

A survey earlier this year by TekGroup International says that online newsrooms are a website necessity for journalists, users, search and social content strategy. “Journalists expect your organisation to have an online newsroom,” reads the introduction to the report. “In today’s digital era, where news breaks around the clock, millions of people are sharing news stories using social media and fewer journalists are responsible for more content – your organisation needs an online newsroom to remain competitive.”

Given the pressure journalists are under, it is understandable that they want access to news in a way that makes it easy for them to use it. Online newsrooms are primed to be a central platform on which all relevant content can be merged, and where companies can engage with the new media on their terms. One organisation that has taken this advice to heart is Adobe Germany: their new online newsroom won last year’s Deutscher Preis für Onlinekommunikation.

According to Alexander Hopstein, Adobe Systems’ senior communications manager for Central Europe, Middle East and Africa, the newsroom was designed to complement already-established though fragmented online and social media platforms, including US-driven topic-related blogs and microsites and the German public relations Twitter channel, which was established in 2009.

Prior to the new newsroom, Adobe’s online presence offered only traditional press material and no targeting based on interests; multimedia content was also not integrated, and it remained isolated from the social web.“By creating the newsroom,” says Hopstein, “we were able to offer a comprehensive overview of relevant Adobe blogs, channels and multimedia content via one single platform. This enabled us to address a broader target audience and increase our interaction with bloggers and other web influencers.”

Plans for the newsroom began in 2010, with Adobe System’s public relations firm, Fink & Fuchs, developing a proposal, designing the look and executing the final strategic approach. Explains Hopstein: “Our brief for them was to come up with a web platform that would consolidate several of our content sources, offer a comprehensive overview and include the direct integration of popular social platforms.”

With this new online newsroom, Adobe Systems hoped to extend their target audience to include bloggers and web influencers: in other words, the new breed of media relations (although journalists continued to be the main target audience). And through consolidating their content and web channels, they wanted to make social media an integral part of their communication mix.

More specifically, Hopstein says, “our goal was to increase the access rates to the content we offer by 100 per cent within six months of the initial launch.” Another objective was to decrease the number of cost-intensive requests by phone and e-mail (approximately 450 per month and rising) by offering a broader range of information services on one web platform.

As far as influences or sources of inspiration for the project, Hopstein cites Coca-Cola as one of the first companies to present a social media newsroom in Germany: “The way it was created, launched and presented was the benchmark for us.”

Other elements of the newsroom include a main navigation segmented by target groups and the presentation of thematic highlights, drawing attention to important issues. An automatic recording of Twitter and other streams and a recommendation button on every post are also featured, as well as the ability to create content either manually or uploaded via Feed. Adobe measures the overall traffic on their newsroom based on dedicated analytics tools, as well as the reverberations caused by the newsroom’s hum of activity, tracking the social actions created with every piece of content. Hopstein says that feedback has been “very positive. Journalists, in particular, appreciate the idea of offering a ‘self-service information platform’.”

I asked Hopstein to explain what the newsroom tells us about the evolution of Adobe’s approach to communications and public relations. “Obviously visual communication is part of the Adobe DNA and so is communication in general”, he replies. “As conversations are increasingly becoming digital and interactive it was natural to reflect this on our public dialogue and the respective platform.

The Adobe newsroom pays tribute to this development by providing all relevant information in a variety of different ways, via different platforms and channels. This supports one of the main ideas of social media and online communications: pull, instead of push. Our target audiences can then decide for themselves when and in which way they would like to receive the relevant pieces of information.” This approach to content that was one of the main reasons given by the jury at the 2011 Online Kommunikations Preis for awarding Adobe Systems the Online Newsroom award. Another factor that sealed the deal was the all-important feedback and figures: according to Hopstein, access more than doubled during the first six months.

As for the future, Hopstein has a clear vision of how Adobe would like to see the newsroom develop. “By integrating Adobe technologies like the digital marketing suite and social analytics,” he says, “we will be able to track content-related access even more effectively. The information we will obtain by using these tools will offer us new opportunities to understand what information pieces our audiences are after and how to further optimise the quality of the content we offer accordingly.” Bringing your organisation’s media content closer to a broad range of users has never been so easy, and on the basis of their recent award, Adobe Systems seem to be leading the way.

"Fink & Fuchs has tapped in to the full potential of what social media can do for a large global company like Adobe. Social is not only a separate media channel but is part of an integrated holistic concept that unites a broader range of journalist communities. Adobe are doing what smart companies around the world are doing: turning the communications process upside down and inside out. It is no longer enough to engage with stakeholders and journalists in a top-down fashion; you have to invite them to the table to share and interact. It champions a set of insights that strong communications directors are embracing: the classic newsroom on the corporate portal as we know it is dead. It has been replaced by a dynamic community of journalists, writers and bloggers who interact with the company and brand at countless touchpoints and on any number of topics. It recognises that it is the community and not just the company that determines the communication agenda. The ability to measure, quantitatively and qualitatively, what Adobe’s audiences are doing is unshackling communications, and giving companies the ability to respond quickly to audiences for greater relevance and credibility. For those corporate communications directors who still look with scepticism and/or fear at what social media can do, Adobe/ Fink & Fuchs have shown that those fears are unfounded. Breaking down the newsroom silo actually heightens level of discussion in a way that tightly controlled, orchestrated online press relations never could."

Carsten Rossi is one of the managing directors at Kuhn, Kammann & Kuhn, responsible for business development, public relations, human resources and innovation. As a consultant, he has worked with several multinational corporations in Germany, Switzerland, Belgium, France and the US. He is a lecturer at the HTW Berlin and a member of the German Twittwoch e.V.

"In a social media strategy there are only three things that dictate success or failure: the integration with your overall communication/business strategies, the content you offer, and the voice you develop. Online newsrooms are a direct answer to two of these, offering integrated content to journalists and the public and making sure they all find something interesting and have the necessary resources. Adobe’s newsroom can be seen as part of this trend. As such, it is hardly revolutionary, but with something as young as online newsrooms, a good execution is as exciting as a new idea. And the execution is indeed very good: the social media integration is seamless, the resources are logically organised and can easily be downloaded or shared on social media outlets, direct contacts to real persons are available and the available contents appeal to a large variety of audiences. A special word of praise has to be said for the integration of local and international news, in obvious recognition that if you want to serve local journalists and web users you have to think as globally as they do. Some aspects could be improved: it is still not directly found from the Adobe website and the legibility of some items on the main page leaves much to be desired, just to state two examples. But overall the newsroom is well implemented and it is no wonder that it has improved results and reduced costs of the media relations team."

Rita Dantas is a Portugal-based researcher in digital media at UT Austin. Her most recent role was as head of social media at the Quadriga University in Berlin. Before that, she was responsible for the conception, programming and marketing of international conferences for the Quadriga University. Dantas studied communication science and European politics in Berlin, Bath, Prague and Lisbon.