Collaboration training in an era of connectivity

To define, encourage and improve on collaboration at your workplace, perhaps it’s time to unearth some old board games? 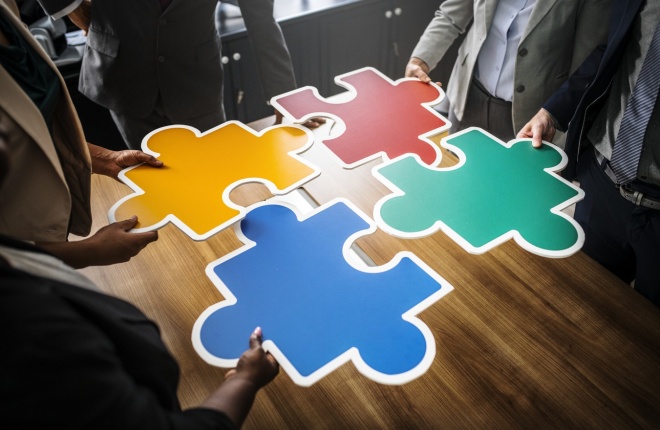 Do we really know collaboration? Or do we just think we know? Spoiler: it’s more than just the act of working together with someone.

To define, encourage and improve on collaboration at your workplace, perhaps it is time to look at games for inspiration and training.

(Photo by rawpixel on Unsplash)

These days, one often hears that “collaboration is the new black”. I first encountered this phrase in 2010 when the pharmaceutical industry and the biotech industry argued for more collaboration. We have of course come a long way since 2010. The tools of modern society have changed – we are much more mobile than before, data is much more accessible than before and we are increasingly more connected.

In fact, the International Data Corporation has predicted (and these are conservative estimates made in 2012) that by 2020 we will be more than four billion connected people, using over 25 billion embedded and intelligent systems and sharing over 50 trillion gigabytes  of data. I will let that sink in for a second. We are not only entering an era of connectivity but are entering an era of unprecedented connectivity in the history of humankind. This kind of connectivity is setting up demands for collaboration that are also unprecedented.

However, do we really know how to collaborate, or are we only cooperating?

Collaboration cannot be turned on with the flick of a switch

In principle any activity, when framed in the right context, may lead to collaboration. However, unlike cooperation, collaboration cannot be turned on with the flick of a switch.

Thus, cooperation might deliver a shared outcome but is built on individual goals, whereas true collaboration delivers on a mutual goal and shared value. Cooperation is comparatively easier to achieve which is also why more examples of cooperation can be found than of collaboration. 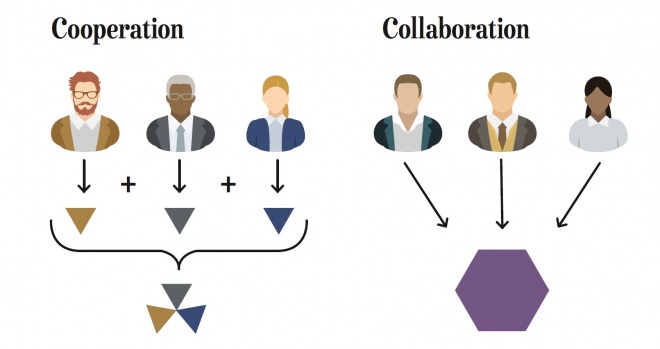 Gaming as a way to facilitate and train for collaboration

True collaboration is a process (and thus can be learned), it is a mindset (and thus can be inculcated), and is essentially dynamic (i.e. it requires flexibility). This is where games and gamification set in. Games designed with collaboration in mind require one to spend time with others engaged in an activity towards a common goal.

This allows for trust-building which is an essential ingredient of collaboration. Another important ingredient is a level-playing field within a safe environment where players exchange ideas, opinions, strategies, perspectives and so on without fear of judgement – gaming often creates this. Often these exchanges continue post-game and lead to real-world boosts in collaboration.

The idea of using simulations and games for training is not new. For instance, in 1970 the Financial Times released a National Management Game that successfully ran for 15 years and involved more than 70,000 people. The game tried to simulate the day-to-day running of a business and train managers to manage fictive balance sheets and handle competition. Pilots have long had to train for many hours on flight simulators before flying passenger planes on their own.

Medical students are accustomed to training on cadavers or plastic patients that are pre-programmed with symptoms. So what is new about using games for training today? What has changed is the landscape and the complexity of games and the ease of accessing, designing and using them. In the past, the entry barrier for simulations had always been high. Not so today. These days,  thanks to technologies such as Unity, game design is much more accessible than ever before. Board games  have also made a comeback and the board games of today are very different from the simplistic games of the past.

They are complex, engaging and very well designed. These “serious games” have established an identity of their own. Furthermore, the entry and evolution of gamification defined as “the use of games/game-mechanics in non-game contexts” (Sebastian Deterding, Gamification: Toward a Definition) has cemented the central role of games and gamification in society today.

It should, however, be reiterated that a game is only as good as the design behind it. Needless to say, a game designed to ask the right questions will always deliver greater value than just a good-looking game. While games have entered the 21st century and are more pervasive than in the past, games designed for true collaboration are still rather rare. The reason for this can be multi-faceted, though two general observations can be made: 1) The demand for serious collaboration games is not very high; 2) The history of game-design itself has often relied on competition as the main driver for engagement with the game.

The first observation is rather easy to explain – as collaboration has often been viewed as something that is innate or easy to do, why train for it in the first place? But as explained earlier, this stems from the fact that most people mistake their cooperativeness (defined by friendly gestures, willingness to share information, pleasant behaviour and so on) with collaboration. The second observation also touches on human behaviour – coupled to an acceptance of dogma – that competition is always good and that societies only advance by being competitive.

This is also reflected in traditional game design which defines games as “a system in which players engage in an artificial conflict, defined by rules, that results in a quantifiable outcome” (to quote Katie Salen and Eric Zimmerman in Rules of Play: Game design Fundamentals). This understanding is also amplified by the concept of the Nobel-prize winning Game Theory,  which, according to Wikipedia, is “the study of mathematical models of conflict and cooperation between intelligent rational decision-makers” and which contrasts games as either Zero-sum (‘I win or you lose’ logic) or non zero-sum (win-win or lose-lose logic).

Thus, according to traditional Game Theory, games fall into two categories: competitive (for example chess and checkers) or cooperative (for example, Settlers of Catan). But there is a third genre: that of collaborative games (for example, Pandemic).

If one defines player behaviour then one can easily see the distinguishing characteristics of each of these categories. In competitive games the goals of the players are diametrically opposed. A cooperative game models a situation where two or more individuals have interests that are “neither completely opposed nor completely coincident” (John Nash, Two-Person Cooperative Games).

As mentioned earlier, game design and asking the right questions and designing for the right intervention determine a game’s uptake and success. True collaboration needs what I call TRACTION: Trust, Resilience, Action, Communication and Transparency.  An effective game design for collaboration will have to design for these, in addition to making the game engaging and fun to play. Collaborative games thus need to have certain elements designed in them to boost collaboration.

These elements include the ability to engage the players for extended amounts of time, encourage suspension of disbelief, allow dialogue to happen, set forth a common goal or challenge that the players should overcome together, encourage constructive tension and last but not the least, allow role-playing and role-switching to encourage perspective taking.

The kinds of games that can stitch these together into an engrossing game design, whether digital or physical, are the ones that are likely to boost collaboration both in-game and off-game. They also should be inclusive (do not expel players in-game).

In the award-winning, collaborative game simulation that I have designed called ESHIP: Navigating Uncertainty (a board game that aims to train entrepreneurial thinking under conditions of uncertainty), the game design specifically focused on the end goal, i.e. what I wanted players to learn at the end of the simulation  as a precursor to all in-game design decisions. Indeed, the popularity of the game and its uptake amongst students, corporates and the startup world can be traced back to the early-stage design decisions.

The game gets you to talk (even to strangers), take leadership roles, take action and react to the in-game effects that an uncertain world throws at you.

The learning goal is that uncertainty cannot be controlled but only navigated and that action is better than inaction.

It is important to realise that games are not the end-all but rather a tool with which one can achieve a desired goal, be that of better collaboration, better communication, more empathy, on-the-job training, and so on. The future for complex serious games looks rosy, be it in the online/digital space or the more traditional analogue/board game space. New technologies such as virtual reality, augmented reality (Pokemon anyone?) or holograms are becoming increasingly accessible which means that simulations will likely take on a new role with the integration of such technology.

Board games and physical simulations are also becoming more complex and diverse with new game mechanics being explored and transformed from one game to another.

Indeed, we are seeing a revival in board games – almost a golden age even – if spectacular crowdfunding success and the sheer explosion in titles are to be believed. This almost counter-culture resurgence probably stems from the need to reconnect physically as everything around us becomes digital. It was also partially this reason that I chose the analogue route instead of digital for my ESHIP:Navigating Uncertainty game – as critical decision making is still going to be a rather face-to-face interaction for a long time to come. Vive la collaboration.