The father of the Republican internet on Trump, Twitter and the pitfalls of online echo chambers 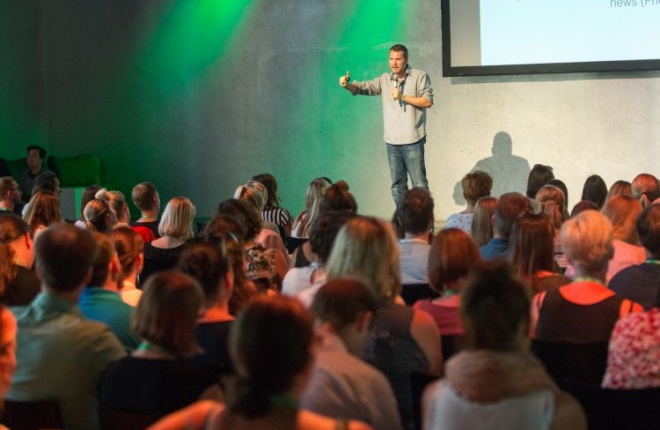 Dubbed "The Man Who Invented the Republican Internet”, Vincent Harries is a prominent exponent of digital political communications, advising everyone from Rand Paul to Benjamin Netenyahu on how to target voters online.

Communication Director spoke to him about political micro-targeting, differences in approach to data privacy between the US and Europe, and the truthful hyperbole behind the Twitter habits of the 45th President of the United States.

We actually did the first political filter ever. It was during the first Republican debate in Ohio and it was around the Iran Nuclear Deal. We used a Snapchat filter which showed an arrow pointing to “How I feel about the bad Iran deal”. People took pictures of horse poo, people took pictures of themselves giving the middle finger, smiling, or showing thumbs down… in one day in the state of Ohio we had over a 130,000 thousand uses. There were a lot of people using the Snapchat filter, but that pales in comparison to a big behemoth like Facebook.

We’re actually seeing Twitter fall bit in terms of importance. In the United States, Instagram has more active users than Twitter does. Twitter remains important for the political elites, for journalists and for political staff, for people like President Trump, obviously, but if you want to get messages in front of a large amount of voters, then you need to go on Facebook first, and then probably Instagram second. That’s the beautiful thing about this industry, every time that we talk, that we work with clients, every election cycle, something’s changed.

What kind of data capture work can you do through Instagram?

Can you explain the different international approaches to data privacy?

Certain states are starting to do that - California has different privacy laws for your website than most other states. But over-all you can capture a lot of information online, and you can target people by almost any attribute and anything you click on online, every post that you like, you’re giving Facebook more information about yourself. And by default you're giving me as an advertiser more information.

Does it make it harder for you, working through two different legal frameworks?

Yes, it’s definitely different, because when it comes to data capture and targeting in America, it’s the Wild West. In Europe, there is such sensitivity to privacy and to personal information that I think just doesn’t exist in America because we default to this marketing first, capitalist first, however-we-can-sell-you-something system.

There’s also a difference in how political campaigns operate in Europe when it comes to individual-based targeting and what you can capture online, because they cannot be as sophisticated in certain countries because of these privacy laws.

As a marketer I can imagine you prefer the US way, but as a private individual, do you think it’s a good thing that Europe has stricter privacy issues?

I’m split. I worked for Rand Paul for two years and one reason I like him is because he's for privacy, he’s been championing that what you do is your business, and not the government’s and not a marketer’s. As a private individual I support that. But it makes advertising to people very difficult. As a marketer in the United States I am glad that we have this openness, but as a private individual I also would feel fine with the laws that Germany has for protecting the privacy of individuals.

In Germany, for example, you can't run a re-marketing ad, which means if somebody goes on the CDU’s website, you can’t put a cookie in their browser and then chase them around the internet. That’s like common base 101 in United States marketing. That’s how we sell so many products. You go to amazon.com and you look at buying a certain book, when you leave amazon an image of that book chases you around the internet. That can’t happen in Germany from a political perspective. That’s very different in the United States.

Post-WikiLeaks and NSA revelations, will that change in the United States?

I don’t see it changing. There’s too much money from marketers that can pay for big lobbyists and give campaign contributions.

To what extent is the internet responsible for the success of populist political parties?

Populist parties are benefiting from social media and from an increased reliance on the internet as a source of information. My grandparents would come home after work and they would watch one of three main news channels, and there wasn't really any other option. They were all on the same page when it came to how they were consuming news and information. Then you had the rise of partisan cable news in the United States with Fox News and then CNN and MSNBC, and then you had the rise of the internet. With every fragmentation of the media you saw a continued fragmentation of partisan behaviour and of partisans coalescing around people that share their common beliefs online.

This is called ‘selective exposure’, when you choose to read news sources and to communicate with people who reinforce what you already believe. It's creating echo chambers across the world where echo chambers didn't used to exist and it's giving wind behind populist parties. Where some of what populist parties used to say would be batted down by the mainstream media, now people online don't have to go to the mainstream media for their information, they can communicate, organise on platforms like Facebook or in WhatsApp groups, and then communicate with one another about getting out to a vote, about volunteering, about fundraising. They don't need the apparatus of the traditional political parties.

Do emotive issues – such as Rand Paul’s messages of criminal justice reform and the threat of government surveillance, or Bernie Sander’s messages against the role of money in politics and the political establishment – play better on digital than others?

You have to say something that gets people fired up online, you have to say something that’s going to generate people to click a share button. Do you click share on stuff that you’re just “meh” about? No! You click share on things you care passionately about. One of the most important indexes in the political poll is the Passion Index. How much do people really care about that politician or about that issue? Do they kind of care, or are they on fire for that issue, are they on fire for that politician? And it’s those issues that are lighting fires under people, that’s what does well online.

Aren’t lighting fires ultimately harmful for political debate? If you can’t get people interested in trade then you’ll get people who vote emotionally for issues that unbalance the discourse?

Passion works online and lightning works online. That’s how you raise money online, that’s how you get shares. In politics that’s how you organise, on lightning issues, whether left issues, such as being pro-choice, or right issues, like guns, these are motivating issues that people feel passionately about and they organise around these issues. But as a citizen of America who supports our western democracies, I am sad to see what is becoming a hyper-partisan environment where people are rewarded for driving wedges in between themselves and somebody else. It’s easy to do that online.

Digital allows marketers to pour gasoline over hot issues, and the outrageous is what gets attention online. We all need to ask ourselves – and it’s a philosophical question, an ethical question, and perhaps a religious question – are we ok with this from a communications perspective? A Princeton political scientist, Marcus Prior, wrote a wonderful book called Post-Broadcast Democracy that shows how, when voters have a choice of news, sports and entertainment, they don’t pick news. People have a lot of choices, which is a problem for us from a democratic perspective because they’re choosing to remove themselves from political news and information.

How do we reach them? It’s through the outrageous. And until that changes, if we’re trying to get voters’ attention online, it’s going to have to be an issue of passion. Because voters most voters would more rather watch Dancing with the Stars than they would hear about some trade policy discussion.

Does micro-targeting pay a role in making the political discourse more partisan?

If you’re a pensioner and I’m running for office and I have a plan that impacts your pension, I can micro-target you with my plan.

If you’re in student loan debt and I have a plan like Bernie Sanders’ for getting you out of student loan debt, I can reach you easier and tell you about my plan. We’re now able to deliver complex policy messages to people that actually are on the receiving end of those policies. That’s the positive side.

Is there a way digital can actually bring opposing political interests closer together?

There’s a theory that the internet helps break partisanship up. This theory is called incidental exposure, where normally, if you’re a liberal and you watch MSNBC and all your friends are liberals and you live in New York City maybe you would never actually hear what a Republican has to say. But if your sister lives in Florida, then you’re accidentally or incidentally exposed to information that you would normally not see online.

These two competing ideas – selective exposure, where we live in an echo chamber, and incidental exposure – are battling each other from a communications perspective, and nobody really knows right now in western democracies which of those is going to prevail.

Vincent Harris is a political strategist and the CEO of Harris Media, an online communications firm based in Austin, Texas whose clients include Sarah Palin, Rand Paul and Benjamin Netanyahu. Harris has lead online communications in political campaigns of US senators such as Mike Huckabee, Rick Perry, Newt Gingrich, Ted Cruz and Rand Paul. In 2015 Harris was appointed head of the re-election campaign for Israeli Prime Minister Benjamin Netanyahu. Harris' work has been featured in publications such as The Weekly Standard and the Washington Post. His commentary on online media has appeared in CNN, Politico, the Washington Post and ABC News.