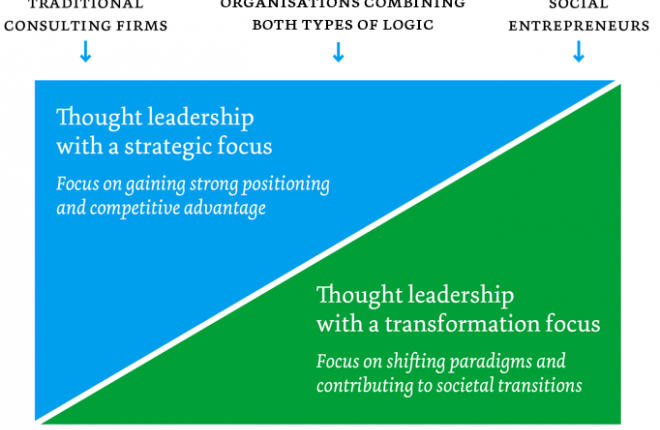 In an article published in this magazine in 2012, my co-author and I described thought leaders as being leaders recognised within their own sectors for their novel point of view on issues that really matter to stakeholders.

Increasingly, companies are realising that positioning based solely on one’s products or corporate identity is no longer sufficient; clients are on the lookout for refreshing ways of thinking, or new perspectives that help them reframe their key issues and move toward new insights and solutions. If your organisation can provide this, customers and other stakeholders will regard your company as a preferred partner to work with.

This view on thought leadership implies a strong business rationale, dating back to the 1970s when management consulting firms like McKinsey and the Boston Consulting Group started to embrace new ways of raising their profiles. They did this to showcase their intellectual capacities and to ensure their clients would see them as a trusted voice on the complex issues that mattered to them.

There is, however, another view on thought leadership,. Transformation-driven thought leaders take on a visible role in driving desired societal changes. They are convinced of a new, future reality and have a strong drive to advocate and shape this new reality. They are known for articulating their vision in such a way that it unlocks conventional thinking and mobilises others to contribute to shaping this future reality.

In doing so, they aim to shift current paradigms in our society. Take the electric car manufacturer Tesla, for example. In a society where driving on petrol is still the dominant paradigm, Tesla wants to ensure that everyone can drive affordable electric vehicles. Or consider a somewhat less-frequently cited example: the chocolate producer Tony Chocolonely, going against conventional assumptions that 100 per cent slave-labour free chocolate is impossible.

It wants to be a forerunner in shaping a future reality of a slave-labour free cacao industry. It inspires and mobilises consumers and partners in the sector to modify the way they have always done business.

Blending both views on thought leadership

. Where do you think your organisation lies on the continuum, and more importantly, where should it lie? On the left side of the continuum, we could plot the previously mentioned consulting companies.

They traditionally embrace a strategic focus on thought leadership, which is logical since intellect and expertise are  the products they offer their clients. On the right side of the continuum, we find companies that are mostly driven by being revolutionary, the social entrepreneurs of our time such as Tony Chocolonely and Tesla.

Their focus breeds revolution. Nonetheless, the social entrepreneurs of today are well aware of the fact that it is precisely their transformative message that attracts stakeholders to their company and boosts their brand and competitive positioning, feeding into the strategic part of the continuum.

There are also companies that are keenly focused on their competitive positioning, but believe they can only achieve sustainable results by igniting transformational change on the issues that matter to us today. This thinking combines both of the intentions behind thought leadership, which is illustrated at the middle of the continuum.

What characterises these companies is that they not only contribute to transformation in the economy and society by triggering new ways of thinking among stakeholders, they have also clearly shifted their positioning strategy to one that is based on this contribution, and the innovative body of thought on which this contribution in turn is based.

Unilever is a case in point. Through its Sustainable Living Plan, Unilever says that it wants to drive transformational change on those societal issues that matter both to its business and the world. Unilever’s novel viewpoint is reflected in the vision that it can double the size of its business while reducing its environmental footprint and increasing its positive social impact.

At the same time, the company is keen on tracking the impact of its sustainable message on the strength of its different product brands.

Business and societal goals are dependent upon one another, and by this same token, both types of thought leadership logic should go hand-in-hand much more often. Having only a strategic view on thought leadership is problematic since it ignores the transformative landscape that we live in and the mounting expectations set by stakeholders to be a positive force in these changes.

A strictly transformational approach to thought leadership without appreciating a positioning focus is an artificial demarcation of our reality, simply because organisations have to survive in an increasingly competitive landscape. Not only do we need both types of logic, we also need leaders and communication executives who challenge their organisations to embrace both types of logic.

This means that communication executives need to balance strategic and transformative objectives, stimulate their leaders to articulate and live up to their novel viewpoints, contribute to a culture that encourages unorthodox thinking and progressive action and develop accountability measures that merge both types of logic.

It also means that in shaping hard-to-grasp future realities communication executives need to embody their vision in every possible way.

This vision should appeal to the imagination and bring the seemingly far-off future even closer. To this end, communication professionals should be skilled contributors in instigating paradigm shifts through their competence in imagining, shaping and expressing new realities, and living up to them.

Corporate communication executives that have the freedom, creative sense and capabilities to do so will have enormous leverage in building meaningful, thought-leading positioning.

This article is an abridged version of Dr Mignon van Halderen's book that formed part of her inaugural speech `Shifting Paradigms – Thought Leadership as Instigator of Societal Change´.