Polarisation as a political strategy

Populism is on the rise in Europe, with populist parties gaining voter support. What are populist strategies, how do they work, and how can open society values remain at the heart of the EU – whatever the outcome of this year's European Parliament elections? 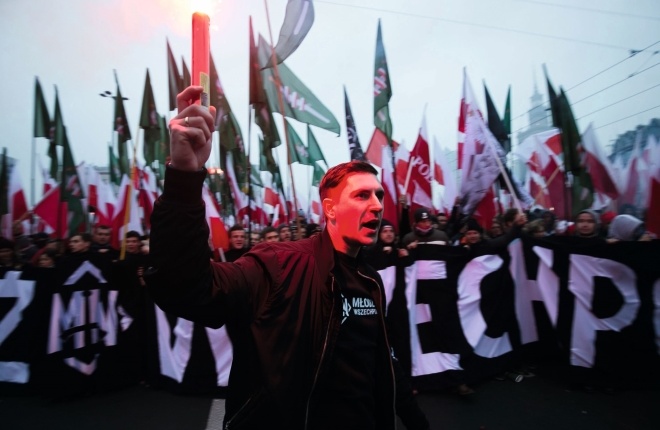 This issue of Communication Director will go to print shortly before the European Parliament elections due on 23-27 May. By the time you are likely to read these words, the immediate results of the elections will be well known.

However, the campaigns for the elections could have even longer-term after-effects, because populists are using polarisation as a political strategy in many countries. The tensions and mistrust generated by this strategy will live on in societies after the elections have come and gone. Mainstream parties need to resist the temptation to imitate the populists and instead respond with much more effective campaigns on the common challenges facing all Europeans.

(Main image: One of the leaders from nationalist group All-Polish Youth at a march to celebrate Polish independence in Warsaw on November 11, 2018 in Warsaw, Poland / Photo by Jakub Wlodek/NurPhoto)

What is populism and why does it drive polarisation?

Populism is not a coherent ideology; rather, it is a claim that there is an irreconcilable divide in society between the corrupt elite and the 'pure' people (Mudde, C. 2004: see references on page 26). Radical right populism makes claims about “draining the swamp” while the left talks of “the one per cent and the 99% per cent.” As a political strategy, populists try to link a series of unsatisfied demands with forms of collective identity around “the people,” and they blame a corrupt elite for frustrating the interests of this in-group (Hawkings, Riding and Mudde, 2012).

In every political contest, some degree of polarisation is necessary so that voters have a meaningful choice between visions and policy offers (see the academic work of Dalton, 2008). But now populists across Europe are driving polarisation to an extreme degree that is damaging not only for democratic debate and institutions, but also for social peace.

Populists portray opponents as enemies, encourage social conflict, reduce trust in democratic institutions and discourage deliberation and the search for common ground. (see McCoy et al, 2018 on the potential consequences). This electoral strategy has been very successful over the past decade in Europe. Austria, Bulgaria, the Czech Republic, Hungary, Italy, Finland, Latvia, Greece, Poland and Slovakia have all had populist radical right parties either in government or part of ruling coalitions.

When polarisation becomes intense, it tends to undermine democracies by challenging their principles and working method (McCoy et al, 2018). Intense polarisation forces political actors to align and express policy preferences along a single conflict dimension. Public opinion becomes similarly divided between two distinct groups that are highly alienated from each other; at the same time, they feature high in-group concentration. In this case, between-group alienation and within-group concentration reinforce each other, leading to conflict (DiMaggio, Evans and Bryson, 1996).

Intense polarisation exemplifies differences between in-groups and out-groups. In these conditions it becomes easier to tap into peoples’ insecurities and enlarge them, by crafting messages that confirm their biases about the outgroup and directing public anger against it. Since 2010, Hungarian politics has become a textbook example of intense polarisation. 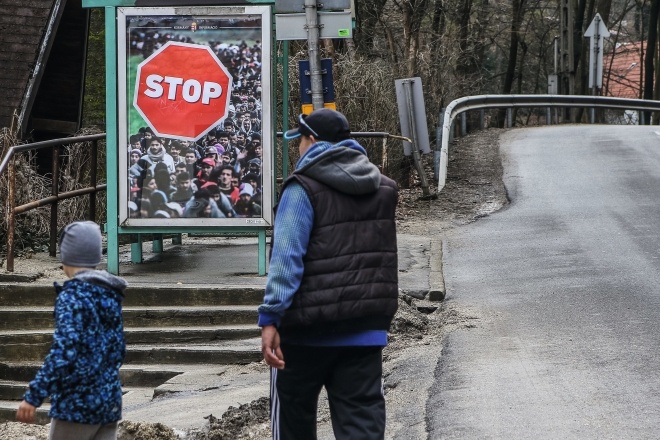 (Above: Man walking in front of official government anti-immigrants banner displayed on bus stop is seen in Miskolc, Hungary on 31 March 2018/Photo by Michal Fludra/NurPhoto)

Hungary’s political system is considered by experts to be one of the most polarised political systems on cultural and symbolic issues in Europe (Vegetti 2017; McCoy et al, 2018). For example, the 2018 government election campaign used religious principles and nationalist symbols that sparked xenophobia and exacerbated polarisation.

Fidesz has garnered popular support by scapegoating outgroups such as migrants and refugees, creating animosity that encourages violence and abuses of fundamental rights and liberties. The abuse of minority rights sets a dangerous precedent that normalises abuse of freedoms. Sooner or later, it will challenge the rights of the majority – eventually causing a departure from liberal democracy and heading toward authoritarianism.

Moreover, by generating unwillingness to form consensus in the parliament, polarisation can lead to institutional stalemates and highly partisan law making. In Poland, for example, the ruling Law and Justice (PiS) party shocked political analysts by overriding core features of liberal democracy, most significantly the separation of powers. Government measures reduced the independence of the judiciary and other vital democratic institutions, and increased tensions between the governing populist party and the moderate opposition.

Polarisation between the governing PiS and the opposition parties drastically increased when PiS also systematically delegitimised parliamentary and civic opposition figures by claiming that they are enemies and traitors of the people, while stoking xenophobia and ethnic nationalism. PiS’s hostility to liberal democratic values – and towards the European Union as their institutional embodiment, despite strong public support for EU membership – resulted in intense polarisation at the level of the electorate (Chapman 2017; Tworzecki, 2019).

From a sociological point of view, intense political polarisation has detrimental effects on society, civic space and democracy, because it leaves hollow the middle ground by compelling citizens to take sides. Political debate becomes dominated by the populists’ frame of most issues being about ‘us’ versus ‘them’. Social psychology theories show that severely polarised societies exhibit the tribal nature of intergroup dynamics, where members become fiercely loyal to their in-group, wanting it to win at all costs, and strongly biased or prejudiced against the outgroup (Green, Palmquist and Schickler, 2002; Mason, 2015).

As polarisation deepens in society, it is accompanied by mechanisms of dehumanisation, depersonalisation and stereotyping, which then shape attitudes, behaviour and discursive practices. ‘Othering’ fellow citizens produces conflicting intergroup dynamics, leading to perceptions of zero-sum interests that reinforce the perception of mutually exclusive social identities and impede joint collective action (Wodak, 2015).

In these conditions, political life can no longer be pluralistic because the opposing camps clash with each other on the basis of their socio-cultural outlooks. This is the reason why intense polarisation corrodes politics and society too: populists present sections of society as enemies that cannot peacefully coexist in the same civic space.

The consequences of polarisation for democratic stability and cohesion are profound: zero-sum perceptions stifle cooperation on shared problems, leading to institutional gridlock and lower confidence in democratic institutions.

"The consequences of polarisation for democratic stability and cohesion are profound."

Polarisation in the 2019 European Parliament elections

Mainstream parties usually consider the European Parliament elections to be second-order elections, as they have been primarily concerned with winning national races. Now however, populists are promoting the vote as a turning point in European history.

"Populists are promoting the vote as a turning point in European history."

Italian League party leader Matteo Salvini proclaimed in 2018: “The European elections next year will be a referendum between the Europe of the elites, of banks, of finance, of immigration and precarious work; and the Europe of people and labour.” Meanwhile, Orban asserted, “if we are unable to reach a satisfactory result in negotiations […] on the issues of migrations and the budget, then let us wait […] for the European people to express their will in the 2019 elections to the European Parliament. Then what must be shall be.”

Previously, only extreme Europhiles promoted the European elections as being so important, when ideas about an economic and monetary union were the driving force behind European integration. Now populist parties are framing their political campaigns primarily around migration, portraying that as the primary issue for the EU as a whole, even though the number of people entering the EU is now relatively low.

Some populists now have ambitions beyond their own borders, saying they will push the EU down a different road: “Thirty years ago we thought that Europe was our future. Today we believe that we are Europe’s future,” proclaimed Hungarian prime minister Viktor Orban in 2018.

Anti-EU voices started gaining more popularity after the global financial crisis in 2008, when decisions about fiscal discipline measures and austerity policies were decided at EU level in order to stabilise the euro and the financial system across the EU. Various member states had to implement fiscal austerity policies in return for much-needed loans. The concomitant rises in unemployment and income tax, as well as significant cuts in government spending, triggered riots and nationwide protests in afflicted member states. Then the migration crisis of 2015-16 further damaged voters’ confidence in political elites.

Disillusioned voters across the EU felt frustrated about the powerlessness of national government in dealing with these crises. Populists were quick to present scapegoats to take the blame: immigrants and refugees, mainstream political leaders and, crucially, the EU’s supranational institutions and integration. Indeed, many populists sought to link all three, by claiming the EU was the reason why people were trying to enter European countries.

By framing these issues in ways that enlarge citizens’ insecurities and fears, populists aim to achieve electoral gains by using fear as their message and polarisation as a political campaign at EU level – going beyond their previous success in using it in national campaigns.

So far, the European Parliament 2019 election campaign has become polarised mainly on the issue of migration. As Orbán observed in January: “This is a topic that is radically transforming European politics. It’s the defining political process in Europe … The party structures, traditionally left or right, are being taken over by a different dimension – those for migration and against immigration.”

“This time it [really] is different”

If pro-EU political parties do not take up the challenge, populists will present the European Parliament elections to electorates as a Europe-wide referendum about putting a stop to migration, which will deepen citizens’ fears and destabilise the EU’s standing globally.

Looking beyond the European Parliament elections, pro-EU political parties that want to counter the politics of fear and polarisation need to build their electoral platforms on liberal principles. They should frame their arguments around the EU’s unique ability to tackle the real challenges of our time – especially the big transnational challenges of technological transformation and climate change that no one country can tackle on its own. That is the best way to show that migration is just one issue among many. It is the only way to reduce the polarisation that is now damaging the EU as well as democracy, by focusing on the common challenges that require a common response across Europe.

Heather Grabbe is director of the Open Society European Policy Institute in Brussels. She works to ensure that open society values are at the heart of EU policies and actions, both inside and outside its borders. Prior to taking on her current role in 2009, Heather worked in the European Commission from 2004-2009 as senior advisor in the Cabinet of Enlargement Commissioner Ollie Rehn. Before that, Heather held roles including visiting lecturer at the London School of Economics, deputy director at the Centre for European Reform and research fellow at Chatham House.