Putting gender on the IT agenda

An ageing workforce and an insufficient number of graduates studying science, technology, engineering and mathematics (STEM) are fuelling a labour shortage in the information technology (IT) sector.

Given that women and minorities are underrepresented in the field, many experts have proposed increasing the participation of these groups as a solution to this skills crisis.

Despite many attempts to attract more women into the technology world (for example, Apple and Facebook are offering to freeze eggs for their female employees, and Cisco invites girls into its offices to give them hands-on exposure to its latest technology), Silicon Valley’s tech giants are still struggling, as the graph below shows.

A synthesis of the academic literature on women in IT and recruitment communication suggests that the under-representation of females in IT is a communication challenge. Over the past four decades, the roles in IT organisations have predominantly been filled by men and, as these companies have traditionally sold to male customers and have not been obliged to publically disclose their diversity numbers, facilitating dialogue with females to encourage them to enter the industry has not been a priority for them.

As a result, women have come to understand the industry as one in which you need to study STEM-related subjects at all stages of education to enter a male-dominated and engineering industry that is “chilly” towards women. Drawing on James A. Anderson’s definition of communication, the under-representation of females in IT is a communication challenge because technology companies have not prioritised “understand[ing]” women. 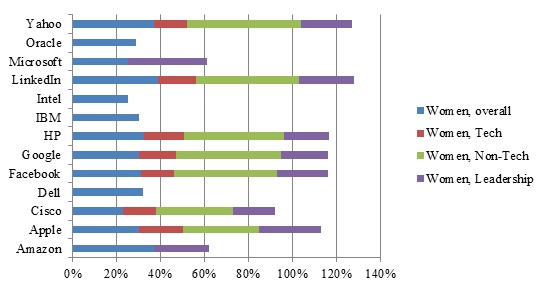 The presence of women in major Silicon Valley firms

The IT landscape is currently witnessing an unprecedented transformation due to three major market disruptive events: the collapse of the global economy, the popularity of cloud computing and the release of Apple’s iPhone. As a result, business users are taking control and starting to make their own IT decisions, asking IT firms to deliver business outcomes. Today’s technology companies don’t just need STEM talent; they also need increasing business skills to enable them to make this transition. This is a fantastic opportunity for technology companies to attract more women, given that women form around 48 per cent of employees in developed countries and more women are heading to business schools than ever before.

Technology companies need to take a number of steps to address this communication challenge. The first step is to define their employer branding: who they are as an organisation, the values they stand for and the “package of psychological, economic and functional benefits” they will provide to their employees (to quote Ralf Wilden, Siegfried P. Gudergan and Ian Lind’s 2010 article “Employer branding: strategic implications for staff recruitment”). The employee value proposition should also include suggestions by academic scholars to increase the participation of women in IT including mentoring opportunities, female-friendly networks and on-going training opportunities.

Technology firms should also ensure their job advertisements include the things that applicants are most interested in – for example, the location of the role, the benefits or rewards offered, the salary, the job itself, the company and the requirements or qualifications needed to secure the position. Research suggests that technology companies are already excelling in many of these areas today. Glassdoor.com’s list of the 25 best companies for compensation and benefits highlights that technology companies are disproportionally represented on the list and account for 14 of the top 25 places. In terms of location, many technology companies support FlexJobs and employees working-from-home, despite Yahoo’s recent ban.

Once their employer branding has been defined, technology companies need to play a more active role in attacking the cultural barriers that are preventing this employer branding from being achieved.For example, it may be difficult for a technology company to change the societal and cultural perception about the appropriate role of women in society, but they can review their own human resources policies and ensure they are not differentiating gender roles by providing: equal maternity and paternity leave to employees; equal pay to male and females doing a similar role; equal training opportunities to male and female employees, and so forth.

The next step in the process is to create a recruitment communication strategy to communicate the employee value proposition and to facilitate dialogue with females. This is where Christopher Storck’s House of Communication Strategy can help. The House helps organisations to ensure that all communication activities are aligned with the corporate strategy and are in line with the oldest university textbook on public relations – Cutlip and Center’s Effective Public Relations (1952) – that defines the term as “a management function that seeks to identify, build, and maintain mutually beneficial relationships between an organisation and all of the publics on whom its success or failure depends”.

Females are now a public on whom the success or failure of technology companies depends. The industry is facing a growing skills shortage that women and ethnic minorities can solve, and IT organisations’ future customers will be more gender balanced. As technology companies build their House, a number of things should be taken into consideration:

Many experts have discussed the benefits of using technology (websites and video) to improve organisational attraction, increase the credibility of organisational messages, reach a wider and stronger pool of prospects, and communicate the “faces of your employees, how your company looks and feels and the passion, authenticity, enthusiasm and cultures that lives inside your company” (in the words of Alan Zavorotny and Micaela Hebert in Business NH Magazine June 2014). IT companies are in an advantageous position to leverage their technologies and social media to drive video-based recruitment communication to attract females.

More communication is needed to clarify that the “pipeline” (I’m drawing here on the literature of Leslie Leventman) is one path to enter the IT workforce and is recommended for roles that require deep technical and engineering skills. If a woman is interested in such a role, but dropped out of STEM subjects at school or pursued another career option, she can follow a Transitional Path and study a graduate IT (or related degree) to transition into the IT world. There are many roles within a technology industry that don’t require a STEM degree, and these roles can be fulfilled by people who have a Traditional Path into IT.

For people who do not have a formal graduate degree and are keen to gain IT training on their own, they can follow a Self-Directed Path into IT; this would include young people who aren’t sure if they want to go to university, veterans who are struggling to find work and so forth. Technology companies also need to clarify how they are supporting women who want to temporarily leave to start a family, with opportunities to inject back into the workforce when they are ready to do so.

Technology companies should also ensure that their communication is not supporting the essentialist argument that women are better suited to roles that focus on the “soft skills” of IT such as user relationships, understanding and communication. The “hard” skills of IT are often seen as the deep technical and engineering skills and this has contributed to the few numbers of females in technology roles as illustrated in the figure above. Technology companies should ensure that all open roles contain an equal number of masculine-themed words and feminine-themed words to attract both genders and that job advertisements have a specific job description and a vague job specification to maximise the number of responses from qualified individuals.

Technology firms need to ensure they are facilitating ongoing interaction with women they is aiming to attract. This will ensure they are listening to the discussions and concerns of females and reflecting this back into their recruitment communication strategy. •