Five lessons in effective communication from the #rezist Romanian protests 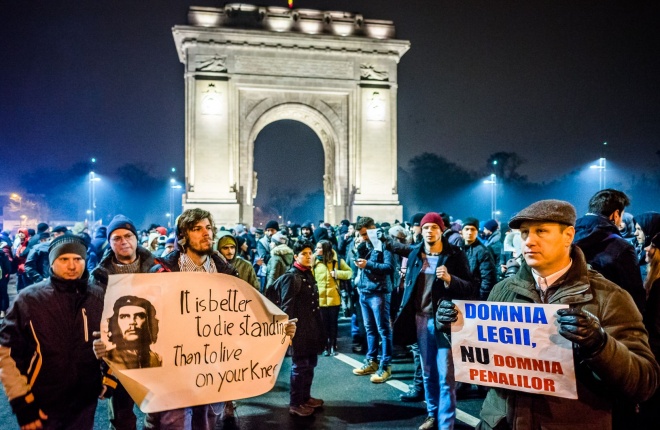 Protests occur all the time. They are disruptive, spectacular outbursts that display emotions towards the national polity and a determination to fight for change. In such cases communicators are more often than not behind the scenes with those advising the protesters and communicating on their behalf avoiding any role that would bring them into the realm of strategic communication/public relations. The history of public relations as spin, as well as its modernist positioning as a management function, are well documented. They maintain the dichotomy of victim/perpetrator, positioning activists and protesters in direct opposition to communicators. The postmodernist and critical perspectives of public relations invite  us to revisit antagonistic relationship, by revisiting the issues of power and diversity which underpin them among others.

But can communicators continue to strive to meet the modernist principles of regulating conflict, quality management, strategic message design, compliance, and of accountability and measurability of their efforts (see Deetz, 2001 cited in Holzhausen and Voto, 2002), and play an activists’ role within their organizations and beyond as implied by the postmodernist proposals?

The participation in the recent Romanian anti-corruption protests of many communicators, some expressing their discontent with political decisions taken by the polity and others taking a more active role in promoting petitions, supporting fact checking and other civic programs, seems to indicate that this is indeed possible.

2017 started in Romania with a newly appointment government’s controversial decision to issue an executive order which would have decriminalized corrupt activities valued at less than 200,000 lei (cca. 43,000EUR). In effect, this would have resulted in either the release from prison or the dropping of charges against many key political figures. The protests began on the night of the proclamation and quickly spread to 81 cities in 36 countries and achieved both the repeal of the order and the fall of the government.

The Decat o Revista article documents the reactions of protesters in Piata Victoriei in Bucharest, the main hub of the January and February protests, including the reflections of various communication professionals. The publication also features Eliza Rogalski’s, founder of Rogalski and Damaschin PR Agency, analysis of the speech of then Justice Minister Iordache considered to be one of the triggers of the protests and Raluca Feher’s, advertiser, journalist and activist, journey into launching and promoting a petition calling advertisers to stop using television stations known to broadcast fake news and redirect their budgets to supporting independent and investigative journalism projects instead. Cumulatively the article shows the crossover of communication forms, and the role of communications experts, in playing specific roles in extending the objectives of protestors and demonstrating how communications practitioners can blend their professional corporate role with that of the activist.

In a sense, the repeal of the executive order and the later dismissal of Prime Minister Grindeanu, are a sign of impact of the protests. So in a sense, applying the modernistic perspective, the protests have achieved their objectives using the traditional means of public relations: engaging with powerful, legitimate stakeholders with urgent claims and by communicating with them through the appropriate channels and tactics – including social media, traditional media and street protests.

But participation in a political protest opposing not only a governmental decision but also an elected government, although a personal choice, can have an impact on the relation and reputation of the communicators themselves. In a sense, what the modernistic approach advocates is for an arbiter and advisor, someone aware of and abiding to normative social standards. Becoming a protester makes communicators take sides and thus lead them to opt for “particularism” in their ethics and decision making, assessing the complexities at hand. This is, in a sense, closer to the postmodernist perspective, of the public relations practitioner as activist (something that Holzhausen discusses extensively in her body of work).

This means that communicators acknowledge and use their understanding of power relations and use their alliances to accomplish their goals, and that includes using the perceptions towards their own profession when advancing the cause they support. This also means that they engage in dissensus and dissymmetry as a means to force change and enable the emergence of new ideas. So rather than seeking consensus, practitioners seek “tensors” or points of difference between their organisations and their internal and external publics. By joining the protests, the Romanian communicators got actively involved in seeking solutions to the problems and attempted by joining the protests to tease out new solutions. In this sense, Feher’s petition can be interpreted as such a new solution. Its effect however, as she discusses at length in her article, was short-lived and only partly met its objectives – as in advertising to some of the broadcasters diminished for a while but none of that funding was diverted to the cause supported by the protestors.

There are many other lessons the Romanian protests teach communicators including consistency, resilience and long-term planning. We covered the five we thought most important in this piece for the Institute for Public Relations and we discussed further the civic responsibility of the practitioner in a blog post for EACD.

Our main lesson for the discipline, however, is that the management perspective of public relations can co-exist with that of the practitioner as activist. It might actually be the case that these roles can operate at times in parallel context. What is certain, is that in the current mediated, hyper-connected environment, the practitioner can and does play multiple roles and has a lot more networks, communities and allegiances to choose from and work with.

Dr. Ana Adi is a professor of public relations and corporate communications at Quadriga University of Applied Sciences in Berlin. She is the coordinator of PR2025, a delphi method study aiming to identify the technical and business competences PR practitioners should focus on to stay relevant and confident in the mid-term and editor of Protest Public Relations: Communicating Dissent and Activism (Taylor & Francis, 2018).

Dr Darren G. Lilleker is head of the Centre for Politics and Media Research and Associate Professor at Bournemouth University. Dr Lilleker’s interests are in political communication, with particular focus on the use of digital environments and the impact upon citizen engagement. The breadth of his work is exemplified in the recent works Political Communication and Cognition (Palgrave 2014) and Political Marketing and the 2015 UK General Election (Palgrave, 2016) as well as studies of recent elections and co-editing the analysis of the #Rezist movement.