Activists of the world, unite!

What would Marx and Engels write today, 170 years after publication of The Communist Manifesto and in a time of more pronounced inequality than ever before? According to the authors of the new Activist Manifesto, Marx and Engels would today be concerned with the phenomenon of activism and with movements that are lending a voice to the unheard. 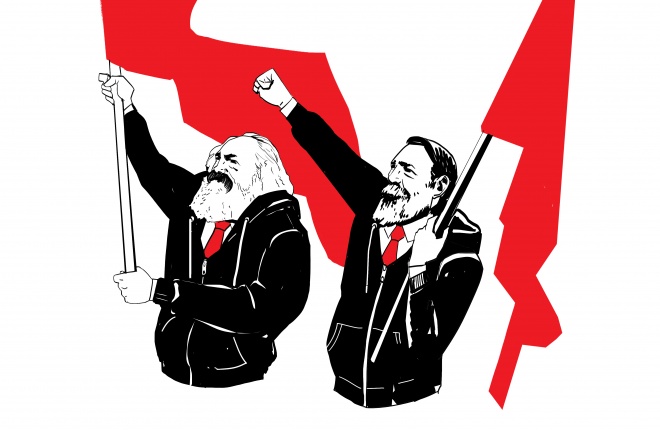 The first edition of the Manifesto of the Communist Party was a 23-page pamphlet, first published in February 1848. Karl Marx and Friedrich Engels updated it repeatedly, in various editions and languages, for decades.

We felt justified in our renovation based on Marx and Engels’ own reflections from 1872, 25 years after they first began the discussions following the First Congress of the Communist League. They wrote:

“The practical application of the principles will depend, as the Manifesto itself states, everywhere and at all times, on the historical conditions for the time being existing”.

We agree. Historical conditions have changed. Although the original Manifesto remains historically significant, its ideas are too dated to be viable as policy. Both the left and right reject its arguments about labour and property. Even leaders of so-called communist countries embrace markets and decentralisation. The Manifesto’s top 10 list of “pretty generally applicable” proposals wouldn’t get a passing grade today, in any setting.

However, one aspect of the underlying revolutionary message of the original version still resonates today: that document was, fundamentally, an attack on inequality. Marx and Engels were both centrally concerned about inequality. Marx had joined radical groups, including the Poets’ Club at the University of Bonn and the Young Hegelians (although he also married a Prussian baroness). Engels had broken off relations with his parents and was deeply critical of how factory owners, including his father, had mistreated workers.

"The original version still resonates today: that document was, fundamentally, an attack on inequality."

We think it is obvious that both Marx and Engels would be appalled by the present-day distribution of wealth. We imagine they would write something like this:

“By the start of our 21st century, we are faced with the extraordinary fact that the top one per cent of the world’s population own the same resources as the remaining 99 per cent. Those at the bottom are less upwardly mobile than in previous generations; entrance to wealthy gated communities is blocked, not only by private security forces, but also by the increasingly prohibitive costs of health care, technology and education. There is the dominant force of mass incarceration, with millions of poor, minorities and powerless walled off from the rulers they might threaten. The Haves have never in history held so much advantage over the Have-Nots.”

Another central theme in the original Manifesto was that revolutions enhance and extend the means for the bourgeoisie to exploit the proletariat. We think Marx and Engels would have been critics of financial innovation and would have seized on the financial crisis in particular, perhaps writing something like this:

“As with the manias, panics, and crashes of history, the dislocations arising from the financial crisis created new opportunities for the Haves to benefit from seizing the political response. The use and abuse of complex financial innovation – derivatives, structured products, credit default swaps, and collateralised debt obligations – have extended the financial system beyond its primary purpose of facilitating economic growth and matching borrowers and savers to secondary and more dubious purposes.”

"We think Marx and Engels would have been critics of financial innovation and would have seized on the financial crisis in particular."

The four-part structure of the original Manifesto continues to work, so we have preserved it.

First is “Haves and Have-Nots” (formerly “Bourgeois and Proletarians”). Here, the original language and arguments are largely intact, focusing on the history of class struggle. We have added some perspective that we think Marx and Engels would have found important, including the impact of internet access, social media and other technologies that brought both power and transparency to various social movements such as Occupy Wall Street.

Next is “Have-Nots and Activists” (“Proletarians and Communists” in the original). Here is the idea that change requires actions outside traditional societal units. For Marx and Engels, those traditional units were families. Today, we think they would recognise not only families, but also other modern social structures. We imagine them writing that:

“The Activist Party recognises and celebrates the various incarnations of modern families and private social structures: the churches and synagogues along with the atheists; the working and non-working groups along with the gatherings of leisure and play; the fitness clubs together with the addiction and recovery societies; and all of the cultural gatherings that nourish Have-Nots even in the presence of vast inequality. The powers enjoyed by Haves families in modern society will vanish as a matter of course when their complement arrives, but the families of the ex-Haves nevertheless can survive, even in a world of declining inequality.”

We also think that if Marx and Engels were alive today, they would update their views about private property:

In the third section, “Socialist vs Activist in Practice” (previously “Socialist and Communist Literature”), our reimagined Marx and Engels update their perspective on ideological change given the modern realities of a hyper-connected world. “Sectoral Activism” replaces “Reactionary Socialism”, “Thematic Activism” replaces “Conservative or Bourgeois Socialism”, and “Critical-Utopian Activism” replaces “Critical-Utopian Socialism and Communism”. We think a modern incarnation of Marx and Engels would call out the shortcomings of financial activists, environmental activists and local political activists with their “siloed” mentalities and approaches. We call out each one.

Although inequality is a dominant theme in both the old and new Manifesto, we determined early on in our reimagining that Marx and Engels would need to update their specific proposals in order to be taken seriously today. Here is our revised top 10 list:

In our view, these are 10 unified proposals centred on inequality that various categories of activists could unite behind. Marx and Engels were revolutionaries, but they were also pragmatic. They wanted their ideas to be widely distributed and discussed as real alternatives. We also want these ideas to be broadly appealing to a wide range of activists.

There is a strand of activism running through not only the Arab Spring, Trump, Brexit and Macron, but also through hedge funds pressuring underperforming companies, environmental groups targeting polluters, and the likes of change.org. Our broad message is that activism could become a powerful political force, if only the activists in various areas (financial, environmental, political, and social) could unite.

A version of this article originally appeared in Reputation Magazine.

Rupert Younger is the founder and director of Oxford University’s Centre for Corporate Reputation and co-founder and global managing partner of The Finsbury Group. He is the co-author of The Reputation Game and The Activist Manifesto. His work and views are regularly featured in news outlets including the BBC, CNN, the Financial Times, The Wall Street Journal and the Times of London. In addition, Rupert chaired The University of Oxford’s Socially Responsible Investment Committee of Council and is a Trustee of the international mine clearance and humanitarian charity The HALO Trust. Appointed by HM Queen Elizabeth II as her High Sheriff of Hampshire for 2013-14, Rupert is also a member of the Royal Company of Archers, the Queen’s Bodyguard in Scotland.

Frank Partnoy is professor of law at BerkeleyLaw, University of California. Before joining Berkeley Law in 2018, Frankwas the George E. Barrett Professor of Law and Finance and founding director of the Center on Corporate and Securities Law at the University of San Diego. Formerly an investment banker at Morgan Stanley and a practicing corporate lawyer, he is one of the world’s leading experts on market regulation and is a frequent commentator for the Financial Times, the New York Times, NPR, and CBS’s 60 Minutes. A consultant to corporations, banks, pension funds, and hedge funds regarding various aspects of financial markets and regulations, Frank is the author of F.I.A.S.C.O., Infectious Greed, The Match King, and WAIT: The Art and Science of Delay.