Are you utilising all possible channels to share your business results? Here is how to use social media to amplify your corporate performance to non-investor audiences. 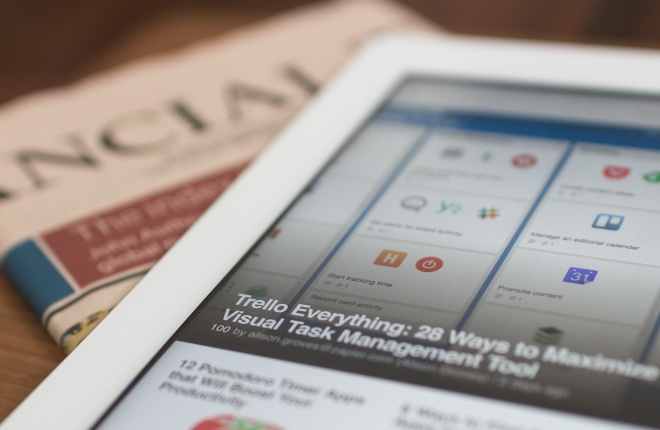 In our experience, investors don’t use social media to access information on results or annual reports – the corporate website will always be their first port of call.

(Photo by Matthew Guay on Unsplash)

That doesn’t mean, however, that a company shouldn’t invest in social content to communicate their performance. Other, non-specialist stakeholders are also a captive audience for this information, particularly employees, potential candidates, retail shareholders and customers. The perceptions of these stakeholders are impacted by a company’s performance and social media is an effective channel to reach and influence these audiences. Our view is that:

Between March and July 2018, we conducted an extensive piece of research to assess how companies are using social media to communicate their corporate performance, analysing: 40 companies from the US, UK and Europe; five social media channels (Twitter, LinkedIn, Facebook, Instagram and YouTube); more than 500 social media posts; and over 74,000 interactions. We scored companies on three equally weighted metrics – volume, quality and engagement.

The research produced fascinating insights into how social media can be used to amplify corporate messages to a wider audience, and in a more digestible way than traditional investor communications. Our findings can be divided into seven areas; channels, content topics, employees, content planning, language, visual assets and video.

1. Channels. It was a challenge to locate the correct social account for a number of companies due to the myriad of consumer and corporate accounts they had and the lack of signposting on the corporate website. Generally, consumer-facing businesses that use social media for heavy customer communications were less likely to communicate performance through social media and most companies opted to re-use posts across channels without adapting content for the different channels and likely users.

Twitter, closely followed by LinkedIn, were the most popular for communicating results and annual report information. LinkedIn attracted by far the most engagement, with Twitter a close second. Facebook was used far less than we expected – with only eight companies in our sample opting to use this channel to communicate results or annual report information. YouTube was used mostly as a content repository, with almost all companies opting to turn off comments on videos posted.

"Twitter, closely followed by LinkedIn, were the most popular for communicating results and annual report information."

Surprisingly, several companies who had effectively used video on their annual report pages neglected to include these videos on YouTube – we felt like this was a missed easy opportunity to reach a wider audience on the world’s second largest search engine! Eighty-three per cent of our sample did not use Instagram and of the seven per cent that did use it, all were from the UK.

2. Content topics. Most companies focused their social media activity around results. Typical content included performance statistics, quote cards and CEO videos. The quality of these varied, with many failing to consider the different audiences on social media and adapt content accordingly. Companies that stood out provided context for performance, explaining how they compared to the prior year, effectively integrated non-financial performance and kept posts simple, impactful, and to the point. Annual report posts, on the whole, were limited, with most companies posting a one-off link to the annual report with a generic image.

IHG – this year communicated a new strategy at a high level on social media.

3. Employees. The majority of social posts we reviewed were tailored for investors and analysts rather than employees. This is despite the fact that employees are directly impacted by company performance, and in some cases, are shareholders. Much of the multimedia content had been lifted from annual report graphics or slides from results presentations, and the language used required at least moderate financial understanding. As expected, CEOs were the most prominent employee figures in the social content across our sample. We came across some stand out examples of CEOs offering their insights through bite size videos and personal blogs. We also saw some strong examples of employees (and ex-employees) endorsing their organisation by commenting, liking and sharing content from corporate social channels.

The results show that using the CEO, who is typically quite inaccessible to employees, to clearly explain the company performance is a really useful way to boost engagement on social media. Encouraging employees to engage with results or annual report content is a very authentic form of employee advocacy - it also has the added benefit of demonstrating a strong corporate culture, which is something investors use social media to assess.

Big thanks to the BEST TEAM in the industry for record airplane deliveries, and full-year company records for operating earnings and operating cash flow. Read our full release here: https://t.co/6MD7el6eka pic.twitter.com/mZPD2eYojx

Boeing’s CEO is an excellent advocate. He shares behind-the-scenes images and congratulates employees and his efforts lead to high engagement levels.

4. Content planning. Most companies that we reviewed missed opportunities when it came to communicating about their annual report and results. While 80 per cent of our sample posted at least once about their annual results on one social channel or more, only 40 per cent posted at least once about their annual reports and 18 per cent of the sample didn’t post anything about either. The companies that excelled in our sample used a variety of formats to tell the story of their performance and had clearly planned out their content over a series of days. However, we observed a lot of companies re-using assets across all channels rather than tweaking them for each platform or re-using graphics that were originally made for investor presentations or the annual report.

Putting aside time to map out content that promotes and builds on your results and annual report is the most effective way to extend their shelf life. We recommend mapping out the key themes such as strategy, sustainability and employees and creating a bank of assets based on content from your annual report and results. Tying social posts into topical events is also an effective way to amplify your messages to a wider audience.

5. Language. Language and tone of voice are critical elements to deliver the right messages on social media, yet they are often overlooked when it comes to company posts about results and annual reports. Most of the social content that we reviewed included a heavy dose of financial language. The most powerful content we reviewed had been created specifically for each social channel and employed storytelling techniques to provide the relevant context behind the numbers. By creating a narrative, the social posts had a much longer shelf life that a one-off post – instead each post helped build the story of the company performance and offered an insight into the company as a whole.

6. Visual assets. Visuals are one of the best ways to explain complex information in a digestible format (which is particularly relevant for financial communications) and help to support your narrative. The most common presentation types included quote cards, results visuals containing high-level statistics, GIFs and video. For annual report posts, many companies simply posted a link to the report with a generic image which didn’t do much to entice users to read more. On the other hand, several companies included too much content on visuals, meaning users were most likely put off rather than encouraged to engage with the content. The companies that stood out the most included ‘behind the scenes’ shots of the CEOs which is an easy and low-cost way to grab attention.

The research shows that leveraging a variety of visual styles across platforms to speak to audiences, is an effective way to increase engagement levels. Some of the more successful examples we’ve seen have been where companies post content in a similar format regularly. Over time, users become familiar with these posts and in a crowded news feed, they will welcome a familiar visual format. 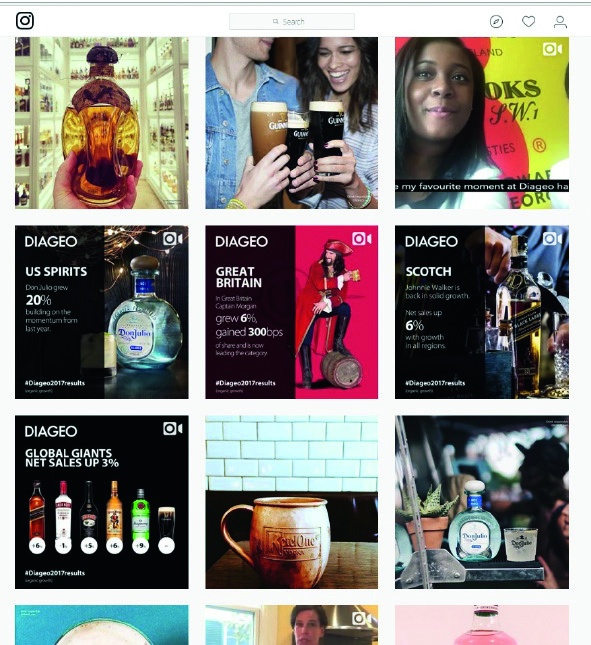 Diageo- all visuals are consistent, not only within social media, but also with the Diageo brand and corporate website, making corporate results posts immediately identifiable.

Video was more commonly used by companies to communicate results, rather than annual report releases. A ‘talking head’ style was most popular, with many companies producing CEO and executive management single-shot videos that focused on financial performance and appeared to be mostly targeted at an investor and press audience. Surprisingly, many companies showed a lack of consideration for social media viewing preferences by failing to include subtitles and posting videos that lasted for several minutes. A small number of companies excelled with their use of video, creating shorter, bite size videos that were better tailored for a social media setting.

Our CEO Ralph Hamers looks back on a successful 2017 without talking about profits, financials, savings and loans. Watch this 90-second recap of #ING's #4Q2017 and #FY2017 pic.twitter.com/ED3cLI5hPR

ING’s CEO features in a quarterly video that combines graphics, subtitles, and on-screen statistics to give social media viewers a 90 second recap of the year (and/or quarter), with a focus on customers and sustainability.

To sum up, an annual report shouldn’t be seen as a one-off communications piece – as a document of record that’s been through internal and external verification, the content is trustworthy and ideal to repurpose. Similarly, results offer a snapshot into a company’s performance and the story behind those results has relevance beyond one day. Social media helps amplify these messages to a wider audience and in a more digestible way than traditional investor communications, acting as a teaser by offering a summarised version of performance.

If you would like to receive a full copy of the research, including a list of best performing companies and top tips, please contact [email protected].

•Most companies aren’t maximising opportunities to communicate relevant information from annual reports and results announcements to a wide audience, who will be interested in much of the information and messaging they contain.

• An annual report shouldn’t be seen as a one-off communications piece – the content is trustworthy and ideal to repurpose. Similarly, results offer a snapshot into company’s performance and the story behind those results has relevance beyond one day.

•Social media helps amplify corporate messages to abroad audience and in digestible way, acting as a teaser by offering summarised version of performance.

• Encouraging employees to engage with results or annual report content is a very authentic form of employee advocacy.

• To effectively stand out in this setting, content needs to be engaging, visuals are acritical way to create ‘thumb stopping’ content and grab the attention of your followers.

•Language and tone of voice are critical elements to deliver these messages on social media, yet they are often overlooked when it comes to company posts

Rowena Crowley is a senior consultant at Superunion. Since joining Superunion in 2015, Rowena has worked for a number of cross-sector clients advising on digital and social media strategy, corporate branding and content development. She previously managed Westminster City Council’s government website and spent three years at Google working in online marketing and communications.

Justine is a senior consultant at Superunion, and helps to develop relevant corporate reporting content both in print and online for a number of listed international clients. Justine previously worked for several years as a Chartered Accountant, first in Audit at PricewaterhouseCoopers and subsequently with Ernst & Young in their Corporate Finance team. Superunion is a brand and communications agency, recently formed from the merger of five WPP agencies – Addison Group, Brand Union, The Partners, Lambie-Nairn and VBAT.