A speech to foster democratic debate? 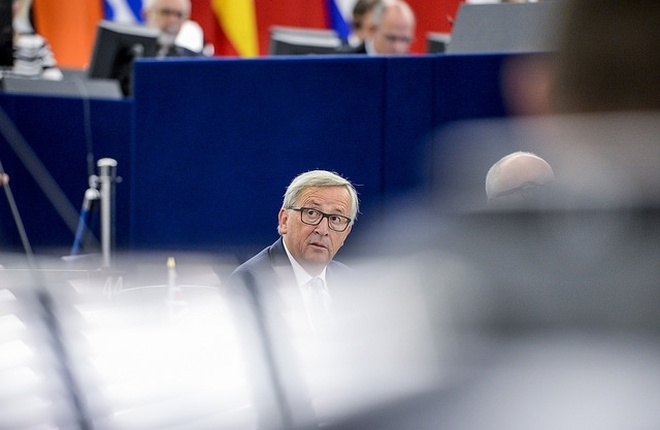 In terms of rhetoric, every major political orator has always combined content and words. In his time, Cicero would speak in front of the Senate to argue on what is best for the future of the Republic, before seeing his arguments discussed by citizens on the Forum. On Wednesday 13 September 2017, the European Commission’s President, Jean-Claude Juncker, delivered his speech on the state of the European Union, in front of the European Parliament in Strasbourg. It was live streamed by the Commission, which also invited reactions on Twitter. From Cicero to Juncker, from the Forum to Twitter, the construction and impact of such a speech has changed so much over the centuries.

Like every orator, Juncker created his character, his ethos: a reliable leader, who legitimately knows what is best for Europe. He first creates a common vision of the EU, shared by him and the audience as a united group. The lexical field of the “union” and the use of “we” creates that group. Anaphoras, repetitions – and even a chiasmus – build a frame in which the President and the audience are gathered, surrounded by a common European spirit.

Then comes the moment when the leader singles him or herself out and shows the way. The use of the first person, the repetition of “want”, the metaphor of sailing (which implies the need for a captain), the use of personal anecdotes and feelings towards the EU… Juncker uses several tools to show that he has the experience and the conviction to lead us to  a better future.

Juncker exposes his ethos to a multiple audience. The Commission broadcasted the speech on a dedicated webpage and on its Twitter account via Periscope (29,500 viewers). It also featured a Twitter wall for people to express themselves, further extending the orator’s scope. The hashtag “#SOTEU” was used more than 1,700 times during the speech, which made it the first trend, worldwide, on September 13. The day after, it was still the leading trend in Belgium.

During the first 24 hours, he tweets were highly factual and informative. The Twitter wall mainly featured tweets by the Commission or by EU representatives, giving a very institutional frame through which the authority legitimised Juncker’s ideas. Yet this also shows that the speech mainly reached the EU bubble even though Junker expressed a clear wish for a Europe closer to its citizens.

The reactive character of the tweets from a particular circle of influencers might be a proof that Juncker was heard and approved. But there is a paradox here. If Twitter offers a broad spectrum in terms of reach – 24 hours after the speech, 104,500 tweets were referring to the SOTEU – it did not broaden the spectrum of discussion - the limited amount of characters played a role here. Nevertheless, maybe Twitter could play the role of a more democratic stage for matters which concern 500,000 citizens. The “democratic debate” Juncker called for is still anchored in the harbour, despite his exhortations to the audience to “throw off the bowlines, sail away from the harbour”. The Forum only saw a certain type of citizens following his lead. To that extent, Twitter needs to make room for more debate and involvement.

Amélie Ancelle is a junior project officer specialised in European projects at Occurrence. Brussels-based, she mainly works on the evaluation of communication campaigns by DGs of the European Commission. She graduated from a Master’s Degree in European Studies at the Institute for European Studies – ULB from Brussels, where she wrote her final thesis on a rhetorical analysis of Eurosceptic speeches.