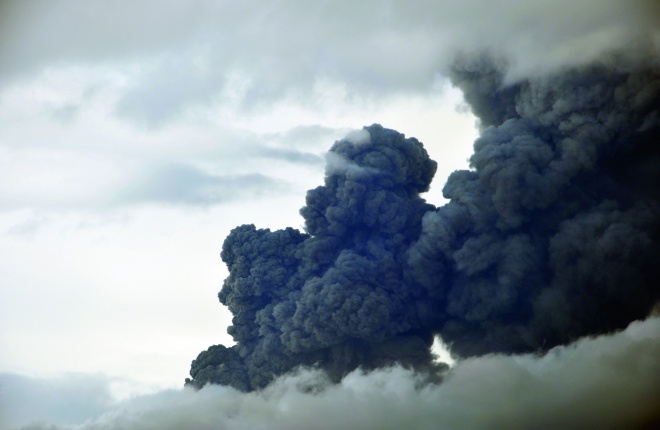 On April 14, Eyjafjallajökull volcano in the south of Iceland started erupting clouds of black ash. The whole world soon woke up to the consequences, as airspace was closed down across Europe, affecting flights throughout the world. For five days it was the world’s biggest media story.

All eyes were on the images of the powerful bursts of fire and ash, and on the geographical maps showing the distribution of the ash cloud. With air traffic coming to a standstill, millions of passengers were left stranded.

For Icelandair, this was a great threat. Icelandair bases its operation on the geographical location of Iceland in the North Atlantic. Through its hub in Iceland it offers flights not only in and out of Iceland, but also between 22 cities in Europe and eight in the US and Canada. It is a small airline in international terms, with 1.7 million annual passengers and 1200 staff, but a large and very important company in its home country, where it ranks as Iceland’s strongest brand.

After the collapse of the financial sector in Iceland in October 2008, tourism became a key industry in the economic recovery of the country. It was extremely important to keep tourism going in order to secure revenues for the nation as a whole. Estimated tourism revenue for 2010 is 1.3 billion Euros. Tourism has been one of the nation’s fastest growing industries in recent years. Accounting for 11.5 per cent of the country’s GDP, it is responsible for more than 20 per cent of foreign currency income and employment in all parts of the country. Its importance exceeds the OECD average compared with other key tourist nations.

On the very first day, as the scale of the situation became known, Icelandair activated its emergency response system, including crisis communications. The strategic decision was made to keep the network operating for as long as possible, and to use all available tools and tactics to get the message across that Icelandair was open for business.

With daily crisis meetings at the company’s headquarters, the flexibility of everyone involved was put to the test. In order to get passengers closer to their destinations, special rescue flights were organised to the very few places open, such as Glasgow in Scotland and Trondheim in Norway. Then, as European air space started opening up, Icelandair’s home hub airport closed down and the whole hub operation was moved to Glasgow airport, along with 200 staff to run the temporary operations for 10 days. Up to 36 flights per day and between 4,000 and 6,000 passengers of all nationalities were carried during this 10 day period, with shuttle flights to a small airport in north Iceland and buses running 24/7 to Reykjavik.

With over 150 schedule changes and tens of thousands of passengers affected during a three week period, the importance of communication was pivotal. Over this period, over 50 press releases were issued in several languages, 250 online web updates were posted on 19 sites in 15 languages, over 200 updates appeared on Twitter and Facebook, and there was a 200 per cent increase in the number of answered telephone calls and text messages sent to passengers.

Icelandair managed to get the message across that it was doing everything possible to help its customers through this situation and get people to their destinations. Only 20 per cent of passengers had to cancel their trips during the period and compensation requests have been minimal.

But the volcanic eruption also had the potential to drastically change the perception of Iceland as a tourist destination. It could be considered dangerous, unsafe and difficult. In the world media, dramatic scenes from this small area of Iceland were mixed with chaotic queues in major airports. The question was how this catastrophic event, which had created an image of a closed and uninviting country, would affect Icelandair, which has a home airport just 100 kilometres from the volcano itself. In the short term, all operations faced the threat of shutdown and abandonment by customers, with the consequential loss of important revenues. In the long term, the image of Iceland as a tourist destination might be irreparably harmed. So the threat concerned not only all of the tourist industry, but also the whole economy of this small country.

Cancellations of Icelandair flights and bookings at hotels, hostels and other tourist services in Iceland from the global market occurred more or less overnight. Tourist arrivals decreased by 22 per cent in April. According to attitude surveys in Iceland’s main markets, interest in Iceland as a tourist destination also declined. Incentive trips were moved or cancelled, and congresses and conventions saw an immediate drop in delegate numbers. Unless tackled, this trend would have cut tourist numbers by a projected 100,000 in 2010 alone, a hefty figure for a nation of 320,000 people. Immediate action was required.

Just a few days into the eruption, Icelandair approached the Icelandic government with the idea of joining forces to launch an immediate communication and marketing campaign to revitalise bookings and avoid a possible disaster in the summer high season. Involving the Icelandic government, the City of Reykjavik and all of the leading players in the Icelandic tourism industry, this collaboration was quickly established and the country’s largest-ever campaign was launched in May with a budget of 4.5 million Euros, just six weeks after the eruption started. The Inspired by Iceland drive rested on a belief in a strong, coherent, innovative and integrated campaign based on conventional advertising, social media and PR.

This extraordinary event marked the first time that a unified and rapid communication response to an unprecedented situation by the tourist industry and governmental authorities had been accomplished.

The objective was to decrease the negative effects of the volcanic eruptions on the tourism industry and to maintain the previous season’s high level of visitors. The target markets were in Europe and North America. It was intended to enhance Iceland’s image as a tourist destination by taking advantage of the media attention it had gained internationally through the volcanic eruption and the financial crisis that occurred in Iceland in 2008.

The strategy was to get people to see the truth about the situation in Iceland through the eyes of others. The main message was that Iceland is up and running, more interesting and welcoming than ever.  Earlier research showed that 80 per cent of all visitors to Iceland would recommend the country to friends and colleagues. In comparison to other nations, this is very high. This fact was worth tapping into and therefore it was decided to focus on storytelling and dialogue between Iceland and everyone who was interested in it.

The campaign was innovative and creative. It made use of not only conventional PR and advertising, such as print advertisements and posters, but also employed new ways of using social media, where “friends of Iceland” were given a chance to tell their stories about what makes the island so special. By encouraging people and companies to use their networks and share interesting videos and stories, it was possible to combat the misconception that this country was a dangerous place. The exposure received in the spring of 2010 was channeled into introducing Iceland’s dynamism, creativity and energy.

The idea of an ambassador programme was taken up and developed as never before. However, instead of aiming at university professors, professionals and heads of local associations, Icelanders themselves became ambassadors, delivering a unified message (mostly with the help of a very lively video about people dancing in the Icelandic countryside). In a world first, between 13:00 and 14:00 on June 3, the entire nation gathered online to show the world that their country was open for business. Backed by a local PR effort, one third of the 320,000 inhabitants sent out one and a half million messages concerning what they love most about their country to friends and colleagues around the globe. The aim was to spark people’s interest and to dispel a number of myths about the country which had arisen since the eruption. This engaged the population behind the tourist industry and its importance to the economy. 90 per cent of Icelanders liked the effort and 65.1 per cent of those who sent the video and the e-card got a positive reaction. To kick-start the storytelling, selected internationally-renowned friends of Iceland (including Eric Clapton, Yoko Ono and Viggo Mortensen) were filmed and their stories posted on the campaign’s website. This encouraged other people around the world to follow suit. Some 470 of these video stories are currently on line at inspiredbyiceland.com, and many more have been posted on the Inspired by Iceland Facebook page.

The website was launched in nine days and its main aim was to reinforce the campaign’s message. Several web cameras were set up in various locations around Iceland:  in Reykjavík, near the volcano and at some of the country’s best-known beauty spots. The message was simple: “If you don’t believe me, go on line and see for yourself.” By broadcasting from these cameras 24 hours a day, people were able to see that the country was not covered in ash and that everything was normal. At the beginning of the campaign, the cameras were viewed around 1,000 times per second. Roughly 200 hits a second are still being received today. The web cameras have been viewed 60 million times in total during these three months!

According to a 2010 Google survey on searches related to leisure travel, more than 56 per cent of consumers stated that they began researching travel destinations and methods on the web. Over 68 per cent of business travelers said that they used the internet when researching ways to travel. Search-engine users are most frequently seeking overnight accommodation, destinations and holiday activities. For web, news, blog and Twitter searches, key words with high search volumes were identified as likely to appeal to all target groups and to saturate search results. The key to success was the creation and online distribution of search-engine-optimised news stories focusing on high volume key words such as “John Lennon”, “Northern Lights” and “Lonely Planet”. This aimed to raise the profile of Iceland when people searched current hot topics and volume terms. Geographical phrases such as “Iceland” and “Reykjavik” were also pushed. These were all blended with terms related to travel and holidays.

Another important part of the campaign was an outdoor concert in Reykjavík held on July 1 with mostly Icelandic bands and a select number of international bands e.g. Damian Rice and Spiritualized. The concert was attended by 10,000 people and viewed online by 75,000 people. Parts of the concert and its build-up were used in other social media outlets to spread the word on Iceland. The whole integrated marketing approach was deployed in both leisure and meeting markets.

The objective of rescuing the summer’s high tourist season was achieved, with figures for travelers coming to Iceland equaling the amount in 2009. The website has been viewed three million times since May, with over 15,000 daily hits and over 480 stories submitted. Over 80,000 people watched the Iceland Inspires concert on the day – 90 per cent of them were from abroad. Live web cameras had over 60 million total views. The campaign has over 43,700 friends on Facebook and 200 bloggers have been engaged. Over 300 journalists have also been to Iceland as a part of this PR effort.

Longer term results also show that people are more likely to visit Iceland in the future and are more positive towards Iceland as a travel destination, after the campaign ran. Icelandair had its best-ever summer season this year - mission accomplished.