Aristotle as guide to 21st-century living 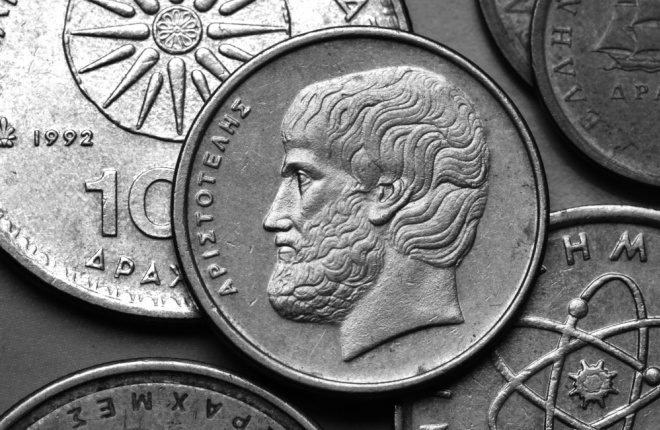 The philosophy of Aristotle, born exactly 2,400 years ago in northern Greece and founder of the first research university, the Lyceum, offers the perfect basis for a rational, secular, progressive public and private morality in the 21st-century.

In particular, his model for living a purposeful, fulfilled and thoughtful life, in harmony with our fellow humans and the ecology of the planet, can enrich our ability to make decisions, communicate with others, realise our full potential, develop rich relationships and face our mortality constructively.

So many of today’s headlines seem like they’re taken directly from a Greek tragedy. What can Aristotle teach us about holding on to hope in days of Stygian darkness?

Of all the ancient thinkers, Aristotle provides us with by far the most interesting material on hope and on courage, both of which he analyses at some length. Aristotelian ethics are completely secular ethics divorced from any religious views, and strongly emphasise human beings taking responsibility for their own happiness through developing what he calls the virtues, which include things like courage, taking responsibility for your own life, making your own happiness in your relationships, in you working life, and doing that collectively in city states.

It’s not just something about your family, it extends to your whole community – the world indeed can become improved through empirical science, rational thinking, rational argumentation and sophisticated political theory. But it is something we actually have to do. We can be optimistic about the future provided we are proactive and courageous.

Aristotle defined rhetoric as the “faculty of observing in any given case the available means of persuasion” – which makes him sound like he works for a reputation management agency. Does his views on rhetoric make Aristotle the patron saint for public relations professionals?

Although Aristotle was from northern Greece, he did almost all of his work and set up his university in democratic Athens. By the time he arrived, democracy in Athens had been going for over a century and it was all about the rhetorical power of politicians. Rhetoric had got a very bad name indeed, by the time he started to study it. It was regarded as something that could make black seem white, white seem black, and where the truth was quickly lost sight of. Aristotle’s teacher Plato condemned the study of rhetoric as immoral and distinct from philosophy, but Aristotle was the first to describe rhetoric as a set of skills or techniques used by one person trying to communicate persuasively with someone else.

It’s completely neutral. You can use it for good ends or for bad ends. It doesn’t have a moral value itself any more than a tool box you have in the garage with hammers and nails. That’s why his treatise, Rhetoric, from as early as 4 BC, is still a model which is studied in departments of speech writing, in debating societies, by political speech writers. It is a clinical dissection of how to make words have the biggest impact on your audience.

What are his rules for rhetoric?

His ABC of rhetoric is as follows: A is for audience. You have to imagine yourself into the heads of your audience, you must always level your message to them. B is for brevity. He is absolutely clear that the shorter you can make the message the better. He has even timed it that the human brain can only last for about 15 minutes following any one argument, which has been proven by neuroscience. And C is for clarity. There is absolutely no point if people don’t understand what you are saying. You will not persuade them if it’s not clear.

That sounds very simple, but nobody had ever said this before, that the minute you lose sight of audience, brevity and clarity then you’re not going to affect persuasion. It doesn’t matter if you are trying to get somebody to vote for you, to buy your products, to marry you, to go to school, to eat their vegetables: these are all simple acts where people are trying to persuade another. With your ABC you can’t go wrong. He was also interested in delivery, which is D. He gave advice on how to dress the part and he talked about visual persuasion in terms of people trusting you – Donald Trump could learn a few things from what he said about not appearing aggressive.

You mentioned he was from northern Greece. Is it significant that he came was born and raised outside Athens?

Definitely. His family weren’t Macedonian but they lived in northern Greece, which was very affected by the aggressive imperialist, undemocratic monarchy. His father was the doctor to Philip of Macedon, the father of Alexander the Great. Aristotle spent his entire life trying to get away from the Macedonians, who he found to be extremely restrictive. He loved Athens because it was a democracy and he could be intellectual there. The minute Alexander he crossed over to Turkey and never came back, Aristotle went straight to Athens at the age of 49, founded the Lyceum and for the next 12 years did nothing but write and think in freedom.

He is actually a great role model for everybody who hasn’t done what they wanted to by the age of 50. I speak as someone in her fifties, very aware that I’ve got to get my life’s project done. It’s very inspiring to me that he never gave up hope to start up his own university. He set up the first research and teaching institution – the first university in the world.

Your blog, The Edithorial, comments regularly on current events. For example, your recent post about the UK government’s plans for higher education drew on classical rhetoric to analyse between the lines of the report. Would lessons in rhetoric in the classroom help us see through the kind of smokescreens so prevalent in corporate and political communications?

Absolutely. So would basic training in logic, which he also pioneered – he wrote the first books on logic. Every school child (and I actually go around to schools talking about this) should follow Aristotle’s analysis of using illogical assumptions and unproven allegations. My students all leave university absolutely capable of tearing any newspaper to shreds. Using the classical philosophical rhetoric, logic and ethics, they can uncover the real agenda. I would like to get this particular intellectual skill much more widely out there. In fact we are fighting a losing battle because classics as a subject are in retreat.

I am also fighting to keep training in the Greek philosophical matters in the UK’s state secondary system. I recently blogged about the fact that one of our two exam boards have just withdrawn classical civilisation qualifications, which is terrible.

A lot of people in my profession are to blame for this. They have cultivated the idea that Latin and Greek languages are the crème de la crème of an intellectual education. In the UK, it’s always been a major syllabus at the biggest public schools. But now you can hardly get Latin or Greek in schools outside the private sector, which is only seven per cent of British school children. 93 per cent of Britons really have no chance to encounter one Greek tragedy or one book of Plato. I don’t think the situation is at all irreparable.

There are many of us now who see classics as a progressive force and not a reactionary one.  It has no actual ideology. It’s just been hijacked since the 18th century by the cultural elite. Many of us are working hard to get classical civilisation GCSC and A Levels out there. In New Zealand for example, one in 12 sixth formers takes a classical civilisation A Level. That’s an initiative that only started 15 years ago. They are a very progressive lot in New Zealand and they’ve now discovered how thinking across history and across philosophy about different cultures can actually inspire young people. It makes them think more multinationally, it makes them much more cosmopolitan and it gives them sensitivity to the fact that political systems aren’t forever. It gives them all kinds of excellent skills.

You were invited to speak on Aristotle at The Circle of European Communicators event in Athens, which suggests that, regardless of the place of classics in the contemporary education, the world of  business still wants to pay homage the classics.

I don’t find it particularly surprising. The number of people who do fantastic work in journalism or different fields involving communication that have some training in classics is enormous.  The ultimate metaphor is the family tree. People like to do their own family history and find out where they came from. Well, this is where our minds came from. I gave a big public lecture last night and you could feel the excitement when I showed them that it is only 30 generations back to Augustan Rome.

Thirty generations is not that much if you think how much we all learn from our parents, from our grandparents. We are actually surprisingly close. The way we think was shaped then. Ancient Greek civilisation come to an end and was replaced by feudal Christianity but they had reached peaks of sophistication and wrote millions and millions of dazzling words on every possible topic in philosophy and so on. If we don’t consult the ancestors who did so well, we miss out on a lot of tricks and I think people know that. Whether it’s from the movies or whatever, there is an allure.

Edith Hall spoke at this year’s Circle of European Communicators, an annual gathering of leading figures in corporate communications that discusses “everything but communications practise”.

Edith Hall is a professor in the Classics Department and Centre for Hellenic Studies at King’s College London. After holding posts at universities including Oxford, Cambridge and Durham, Edith Hall took up a chair in Classics at King’s College London in 2012. She is also the consultant co-director of the Archive of Performances of Greek and Roman Drama, chairman of the Gilbert Murray Trust, and patron of Northern Broadsides Theatre Company. She regularly contributes to BBC Radio and to television documentaries, and writes in the Times Literary Supplement, The Guardian, the New York Review of Books and other periodicals. She has been consultant on numerous theatre productions at the National Theatre, Shakespeare’s Globe, the Royal Shakespeare Company and several theatres in the USA, Germany and Poland. She has published more than 20 books on diverse aspects of the ancient Greek and Roman worlds and their continuing relevance.