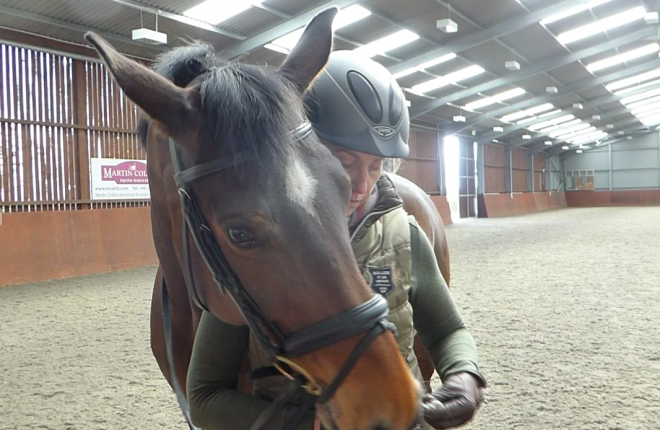 Dressage! Yes, the sport where horses prance around in circles. I love Eddie Izzard’s take on it: “Highly trained riders, highly trained horses: it’s brilliant – but completely useless…unless you want to park your horse in a cupboard!”

If I was just a spectator, I’d probably agree. Dressage started for me with a four-year-old horse, called Onion [yes!], who was minding her own business until I came along with all my hopes and dreams.

Although I’d grown up with horses, it was the first time I had taken on such a young one. I had a good trainer for support, so although I was juggling a busy career I was looking forward to progressing quickly.

At first, I fitted riding in whenever I could during the week. Usually it was a case of dashing over to the stables after work, a hasty hello to Onion as I marched into the stable with tack, a quick ride, then the usual mad scramble to get home before 10pm.

Onion was still young and maturing – with the temperament of a young teenager. She had a mind of her own and didn’t like being fussed over. Like a teenager, she’d visibly shrug off attention, as if to say, “Oh, get off me.” It put me in my place and made me smile. She’s very independent.

Competitively, we were doing pretty well though events were not without their hiccups. Onion’s tendency to see ‘monsters’ in flower pots around a dressage arena always seemed to be in direct proportion to the number of people watching. Of course her best ever dressage performances were at the stables with no one watching!

Onion matured; there were fewer monsters. We put the work in but progressing to the level I’d imagined seemed to be taking forever. Although I loved Onion’s quirky, feisty character, we couldn’t seem to find our rhythm. It took a while for me to work out why: a lesson that has stayed with me.

Certainly, I wasn’t about to give up on Onion. It would have felt like a cop out to swap her for an ‘easier’ horse. Annoyingly, I’m attracted to impossible challenges and I believe that taking a harder route will ultimately make me a better rider.

For no special reason, I took a week’s holiday, deciding to stay at home rather than go away. This gave several days straight to practice my cupboard parking! During this time, we made huge progress in the arena and Onion was suddenly a lot less aloof; her quirks were amusing rather than those of a diva.

I slowed down mentally and physically. Instead of focusing on what I thought we should achieve in 40 minutes, I began to tune into Onion, becoming more aware of her response to me.

In the stable, instead of breezing in in a whirlwind of busyness, I had time to just ‘be’ with my horse. One day, when I was leaning quietly against a wall attending to something, she came to stand next to me. When I moved, she shifted too, resuming her position by my side. Moments later, she rested her head gently on mine. It was so subtle, yet deeply meaningful – especially coming from Onion. This small gesture spoke volumes. Something important had passed between us.

A more spectacular demonstration of this growing trust took place at a competition. Onion managed to get her head the wrong side of the trailer divide, and had become entangled in a rope. I found myself between a steel trailer divide and a half-ton horse whose natural instinct would usually be to panic and break free, no matter what was in her way. She shook with terror. Knowing I had a split second to act, I let out a deep ‘Whoa!’. Onion was looking at me: against her instinct she decided to trust me. She let me lurch forward and push her head back into the trailer she was trying to escape. I was able to untangle her, then open the door.

It was one of those suspended moments in time; I felt deeply connected to Onion, that I truly understood what she was feeling.

They say that a good rider hears their horse speak, but a great rider hears them whisper. Horses communicate all the time but I’ve realised that no matter how much you think you are listening, there are always deeper layers. Maybe Onion isn’t such a peculiar name for my horse after all. Oh, and it’s true what they say – they do make you cry.

In the end, she taught me, and I’m grateful.