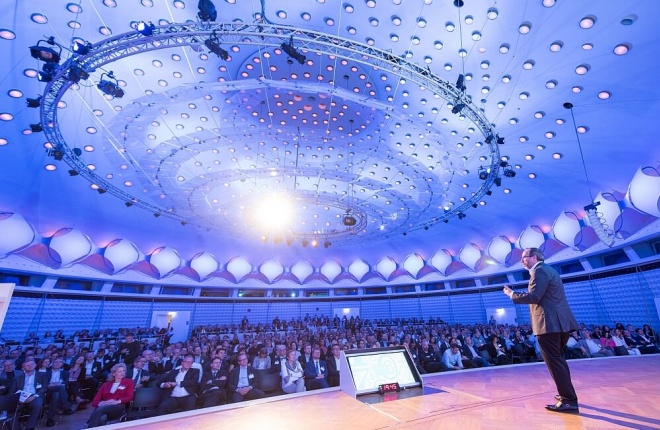 Wikipedia, which started in 2001 as a hobby project belonging to a small community, has become an organisation that deals with its exponential growth through collaborative thinking and creativity.

Image: Jimmy Wales speaking at the Kommunikationskongress 2016 held in the Berlin Congress Center

Social media has changed the world, but much of it is confusing.Quality is not always produced but rather a lot of noise and anger. Wikipedia shows a different path, the collaborative path. It is a place for reasoned discourse, a calm alternative to other spaces online. That doesn’t mean that everything is always calm inside Wikipedia: we are human beings, so we have our arguments. But in general we strive for something quite different and there are lessons here for politics and business.

The original vision statement for Wikipedia was to imagine a world in which every single person on the planet is given free access to the sum of all human knowledge. It’s been a few years since then and now we have over 40 million articles, over 400 million people visiting the website every month and active projects in about 230 languages. Regarding our global infrastructure, we now have 10 languages that have over one million entries, 48 languages with at least 100,000, 128 with at least 10,000 and 234 with at least 1,000.

A recent tweet from a teacher explained that she asked one of her students if she knew what an encyclopedia is and the student replied, “Is it something like Wikipedia?” Wikipedia is now 15 years old so, and that means that for students who are entering university today, Wikipedia has existed from the time that they knew how to read and in the last five years or so has supported them in doing their homework or in pursuing whatever interest they have.

What’s in a community?

This next generation is very comfortable with the collaborative style in which we at Wikipedia work. But it’s important that we think about the quality of that work. Are we setting a good example for young people?

There’s a major strain of work related to what we call community health – making sure that people aren’t being turned off by Wikipedia because it’s too aggressive and angry. Our editing community has certain characteristics: an average age of around 26 and about double the percentage of PhDs compared to the general public. The word ‘community’ is often abused in the context of online – usually people talk about community when what they’re really talking about is just random interactions among the general public. For example, you can’t really talk about “the Twitter community” because, although Twitter does have sub-communities and groups of people who know each other, Twitter is itself not a community in any real sense.

So if your vision of how Wikipedia works is that 100 million people each write one sentence and that magically becomes an encyclopedia, that isn’t really correct. We’ve got about 80,000 volunteers, loosely defined as people who make around five edits per month. But the real community is about three to five thousand people who are organising the work. They are passionate volunteers, the people who really build Wikipedia. They look after everything: they greet newcomers, they make sure the newcomers are behaving themselves (which isn’t always the case) they make plans, and they organise events. They are the true core of Wikipedia, working together under a guiding set of principles. We’ve never regarded Wikipedia as a wide-open free speech zone. We’ve always said, “We’re building an encyclopedia” and “We want to be high quality,” and those are two of our fundamental values. A lot of things are determined by these bigger-picture principles and values.

Another principle is maintaining a neutral point of view. Wikipedia tries not to take a stand on controversial issues but aims to describe all points of view fairly so that you can come to your own conclusions. This is really a powerful technique for two reasons. One relates to what people want from an encyclopedia; they don’t want to go to an encyclopedia to hear one side of the debate, they want to understand the debate so that they can make their own decision. It also enables people who have different perspectives to work together. If we decided that Wikipedia’s job is to pick one amongst the various perspectives out there and shun the others then the people who are on the losing side of that debate would get very angry. But if we can fairly describe all the points of view, then people are able to work together in a more peaceful way.

“This next generation is very comfortable with the collaborative style in which we at Wikipedia work.”

A third principle is free licencing. As much as possible, everything in Wikipedia is under a free license, meaning you can copy, modify and redistribute modified versions for commercial or non-commercial purposes. This is important to us because this is our gift to the world. We want people to be able to take it and do whatever they want with it. We want you to be able to modify it for use in a school and to distribute it to people who don’t have access to the internet. It also has an ethical component. In order for everything to be freely licensed we can’t just take content, we have to respect copyright. Whatever may be wrong with Wikipedia, we can say with some pride, “We built it ourselves.” No one will ever say, “Wikipedia is really good but that’s just because they stole it all from other encyclopedias”. There are always some potential problems, but when we find something the community is very quick to take care of it.

Our fourth principle is civility. This is a core value. One of the first rules of Wikipedia is “No personal attacks”. Wikipedia shouldn’t be a space for trolling, for anger, for attacking people or calling people names. You’ll get blocked very quickly for that. It isn’t the kind of environment that’s conducive to our mission of building an encyclopedia. This is one of the areas that a lot of other web spaces have made a real mistake in, in that they didn’t establish that as a fundamental principle early on and it’s very hard to establish later.

Finally, one of the stranger rules of Wikipedia is to ignore all rules. Now, this doesn’t quite mean what you think it means at first reading. We know that there are particularly detailed editorial rules about the formatting of footnotes and so forth, but these shouldn’t stand in your way of getting started. As you start with Wikipedia and there’s something that you’re unsure about, people should come and educate you – you should not get banned for breaking some minor rule. We need to be flexible, because it’s more important to improve the encyclopedia than to have to a set of rules. As a community that’s been around for 15 years, we’re so accustomed to enforcing the rules that sometimes when people come in and inadvertently break a rule they get
yelled at a little bit more than they should.

Putting the above principles into action allow us embrace an ethos of collaboration. Too often, people think in very vague way about online communities. People are always hoping for some kind of magic – throw up some software and the community will come and build things. But in actuality we’re talking about people. You can optimistically talk about cyberspace as an amazing new world, but the truth is, nothing’s really changed. We are the same human beings that we were a 100 years ago and 1000 years ago.

These are your people – the people around your business, around your customers or partners. Instead of thinking of them as a resource to be used magically in an online community, think about what they’re trying to accomplish and how you can help them accomplish that. That’s the fundamental principle for getting to genuine collaboration. Think about what it is people want to do and then help them do that. Collaboration is a very powerful way of doing that.

“You can talk about cyberspace as an amazing new world, but the truth is, nothing’s really changed. We are the same human beings that we were a 100 years ago and 1000 years ago.”

As a collaborative organisation we have dozens of local chapters world- wide that are self-organised. They handle local partnerships including work with galleries, libraries, archives and museums, getting them involved in the collaboration through things such as donating photos. The chapters are also responsible for local public relations. A classic case is a local Wikipedia story, such as an Estonian politician caught doing something naughty to Wikipedia. If you call San Francisco for help with that they will say, “We don’t know anything about what’s going on in Estonia so maybe you should contact the local community”. The chapters also take on community building. That’s local activities like conferences or meetups to help grow the local community and make sure that we’re healthy and happy.

These chapters don’t take place in any kind of a top-down structure from California. We are a global community that’s grassroots and ground-up, and this works for us only because these grow organically from our community. We wouldn’t be able to impose top-down solutions worldwide and so instead, because the nature of the work that we do is collaboration, it’s very natural for us to work in this way.  So, in practice, innovative ideas come up through the community rather from a top-down process.

One of my favourite examples is “Wiki loves monuments”. This started in the Dutch community where they decided to hold a photo contest and it was very successful – it’s expanded around the world. People can take photos of famous objects in their area and upload them to Wikipedia in a contest to see who has the best. This has been an enormous success. The Guinness Book of World Records declared it the largest photo competition in history. And it is a new way of bringing photographers into the community who otherwise might not have. This in turn improves the quality of the encyclopedia and it improves the community. And this came organically from the community. Nobody in a focus group sitting in San Francisco decided top-down “Let’s do a photo contest”. It happened because we’re a collaborative organisation, because we’re open and because we allow people to take their own initiative.

Jimmy Wales is the founder of Wikipedia. From 1994 to 2000 he was research director at Chicago Options Associates; in 2001 he launched Wikipedia with Larry Sanger and others. Wales serves on the Wikimedia Foundation Board of Trustees, the non-profit charitable organisation that he helped establish to operate Wikipedia. In 2004, he co-founded Wikia, a for-profit wiki hosting service. His role in creating Wikipedia, which has become the world’s largest encyclopedia, prompted Time Magazine to name him in their 2006 list of “The 100 Most Influential People in the World”.