"We have to accept that the controls are off"

Finding purpose and letting go in the face of digital developments 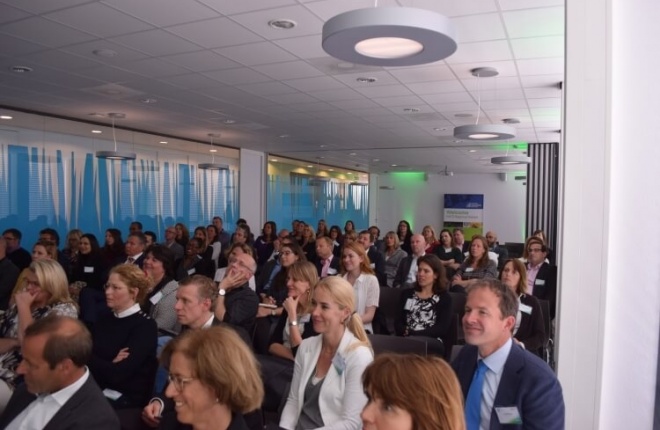 News – whether bad or good – can go viral fast, with limited options for control. In an age when every employee tweets, what chance does the communications director have of knowing every mention of the company?

As part of a wide-ranging discussion of the impact of digital on the head of communications, the subject of control and the lack of it was a running theme. In his role as Regional Coordinator for the European Association of Communication Directors (EACD), Hans Koeleman, director of communications and CSR at KPN, introduced the evening’s speakers: we caught him with him directly after the event to find out where he stands on the control/no control debate.

Image: Corporate communicators in the audience of the #eacd10 Anniversary Event at KPN's headquarters in Amsterdam on May 25

A recurring theme that emerged in today#s discussion was the challenge presented by digital communications to the ability of comms professionals in controlling messages. Where are you in the journey of this?

We have to empower people. We have to accept that the controls are off, and we have to help our colleagues to communicate in a digital way, in the best possible manner. It’s all about the empowerment of people. The digital age will show you that corporate control, centralized control, is gone, and empowerment is everything.

How did you and your fellow regional coordinators decide on this topic for this EACD anniversary event?

Look what happened in the past 10 years since the EACD started. When I joined KPN I had a Blackberry. That was the hottest thing on earth. Then four years later I was telling employees that they couldn’t get an iPad as they were too expensive” Now everybody has an iPad and internal communications is not just an intranet anymore, it’s on my smartphone.

"Look what happened in the past 10 years since the EACD started."

All communications is on the smartphone these days. That’s a tremendous development in just 10 years.

So it’s been 10 years of EACD and 10 years of digital transformation... where do you feel the next 10 years will bring us?

There’s this dynamic where people can communicate themselves. At the same time, we have to ask ourselves, “why are we all together as a company?” Thinking about this central purpose, why are we here, why are we doing what we’re doing, is very important. You can empower people to communicate freely, but they all work for the same company so a shared identity and purpose is very important. What we have to do as corporate communications professionals is to define why we are here, and if that is defined then you can let your employees go. But if that is not defined you have a problem. It will be far more important in the next 10 years to have a clear purpose as a company, clear values that you all adhere to.

"It will be far more important in the next 10 years to have a clear purpose as a company, clear values that you all adhere to."

And what will also be very interesting is that we will have a complete virtual life in the next 10 years. Now it’s Facebook telling you who is having his birthday, but in the future you will have a lot more information coming to you that you do not have to process yourself anymore. You’ll know exactly where to go, when to go, who’s emailing you, who you have to answer, who you don’t have to answer and you can be at meetings without being there because you send your avatar. That will be a tremendous change. But I think there will be always a need for a clear idea of who are we as an organization, what are our values in life, and how do we operate as a company in the world?

Will a future of increased M&As leading to massive companies make this kind of cohesiveness a problem?

I don’t think so and I’m not really sure that there will be bigger and bigger companies. KPN is doing a lot of work these days with start-ups so we’re in a network of companies. We’re not just trying to grow bigger and bigger, we just like to be more flexible.  I don’t think that companies will become bigger, they will become more adaptive, more flexible and more intuitive to work with all sorts of different organizations. It will be a networked kind of society that we will be working in.

You began your introduction this evening with a long list of varied events the EACD has held in and around Amsterdam. As an EACD Ambassador to this region, what do you think it brings to your work as a communicator?

The most important element of EACD is connecting with your peers around Europe. If you’re the director of corporate communications and CSR of KPN, you probably think that I am inspired the whole day by all sorts of things in my company. While in reality I go out. And when I go out and when I’m in conferences and I meet colleagues from other companies. That’s where I get my inspiration from. I get my inspiration from discussion with peers that have the same dilemmas as I have but they have found some solutions. For a good corporate communications director or any person working in this field, it’s very important to go out of your company, go out in the world, see other people from other companies, and get your inspiration to do your work in a better way. That’s how I do it.

In his role as Regional Coordinator for the European Association of Communication Directors (EACD), Hans helped organise the third in a series of #eacd10 Anniversary Events held across Europe this year. Find a summary of the event here. To find out more about these and other events, visit the online EACD calendar here.