The expertise to deal with recent crises such as the plight of Syrian refugees or the Ebola outbreak is already in our hands: what we lack is effective, visionary leadership 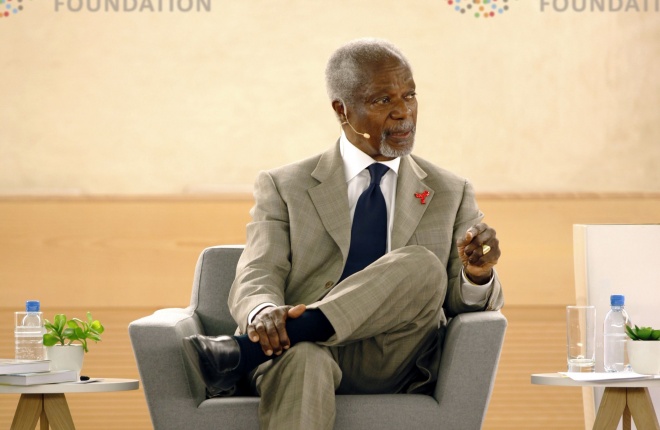 Growing up in Ghana in the midst of my country’s struggle for independence, I was part of a generation which believed that with inspired leadership change, even dramatic change, was possible. I witnessed it first-hand.

This experience profoundly shaped my outlook on life and gave me a sense that nothing was impossible until proven otherwise. It was an experience that was to become very powerful many years later when, as secretary-general of the United Nations, I would go to bed with a major crisis on my desk and wake up to two more the next morning. Staying hopeful in such a situation can be difficult and some people have “accused” me of being a hopeless optimist but the truth is that I know what is possible when the right people get together at the right time and set about transforming the world.

Leadership can have many faces. And leadership through philanthropy is one of them. Modern philanthropists have brought a new impetus to the culture of giving not just by donating money but with ideas, energy and their own experience in delivering results. At the Kofi Annan Foundation, we have developed close relationships with some of these new philanthropists as we seek to achieve progress on some of the world’s intractable problems; we appreciate and admire the drive and commitment such philanthropic partners bring to solve those problems.

The need for leadership

Principled leadership is the essential quality that will propel our world forward because what the world is experiencing is a crisis of leadership, not a crisis of knowledge. Take Ebola: we have known about it for 40 years, yet we did nothing.

Climate change and its implications is a divisive subject in political circles but the scientific community reached a consensus on the need to act long ago. The flow of refugees fleeing violence-affected parts of the Middle East should not have come as a surprise and yet there was an unwillingness to act decisively until the picture of an innocent three year old drowned in the seas off the Turkish coast made the front pages around the world.

In short: the expertise and evidence needed to solve pressing problems such as poverty and malnutrition, climate change and pollution, violent conflict and poor governance already exists. What holds us back too often is a lack of leadership and of political will to use it to deliver solutions.

"What holds us back too often is a lack of leadership and of political will to use it to deliver solutions.”

Since retiring from the position of secretary-general of the United Nations, this is what I have devoted my time to: mobilising the political will needed to overcome threats to peace, development and human rights. My experience has taught me that there can be no long-term peace without development, and no long-term development without peace. And no society can long remain prosperous and peaceful without the rule of law and respect for human rights.

The challenges awaiting us are enormous. The global drugs trade, collapsing peace processes, climate change, international migration, and financial flows, both licit and illicit – have one thing in common: they lack the unbending resolve of those who could address these issues, to do so. The result is weakening faith in democracy, retreating into unilateralism, ultra-nationalism, or the politics of identity. This unfortunately will produce nothing but a bitter, fragmented, parochial and dangerous world.

These challenges require leadership and the ability to think long-term and see the big picture. In this complex and interdependent world, leadership that just looks at the next elections or the next shareholder meeting is no leadership at all.

These challenges also require leading by example. Giving cash is good but being an active partner for change is even better. Margaret Mead, the cultural anthropologist, once said: “Never doubt that a small group of thoughtful, committed people can change the world. Indeed, it is the only thing that ever has.”

Be part of that group. Give leadership.

The late Kofi Annan was the seventh secretary-general of the United Nations and is the 2001 joint Nobel Peace Laureate. His Foundation seeks to mobilise the political will required to overcome threats to peace, development and human rights. The Kofi Annan Foundation is legally incorporated in Switzerland as an independent not-for-profit foundation based in Geneva, Switzerland.