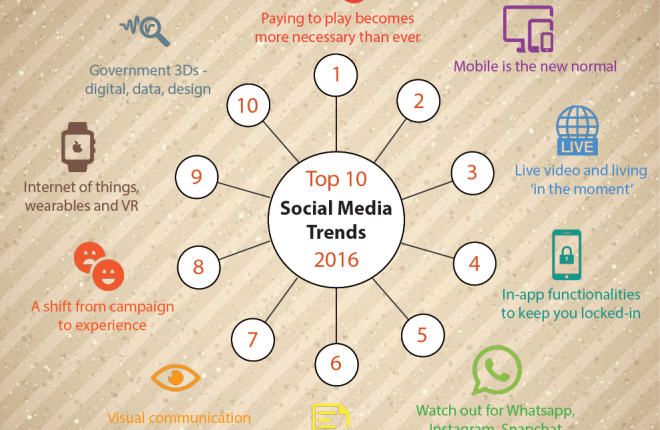 Increasingly, those who look ahead have an advantage in digital communications, in particular on social media. Anticipating future trends is not just fun (albeit difficult fun), it’s also vital if you want to be able to allocate your resources properly and develop an integrated communications approach across online and offline channels.

So, after some intensive weekend reading, in particular during the Brussels lockdown, here’s a personal compilation of what the 10 most probable social media trends of 2016 look like, with a focus on government communicators and what they can make of these trends. The data provided is from credible sources which you will find compiled at the end of the article. The examples mentioned come from my personal exposure to best practices, including as a jury member at the Digital Communication Awards in September 2015.

1. Pay to play becomes more necessary than ever

Paid advertisement on social media used to be for companies and brands that can afford it. Well, those times are over. More and more government and SME communicators are faced with the difficult decision of having to increase their social media advertising budgets, as Facebook’s organic page reach is now close to zero and there is more and more noise on social media.

As a public service it can be difficult to take this decision as budgets are subjected to public scrutiny, but I’m still looking for the study that shows that citizens or users have a negative bias when they see promoted tweets or Facebook posts from public services. After all, if the information they get is useful and relevant, then where is the issue?

According to others, however, 2016 will also be the year where ad blocking explodes. If you already use ad blocking, you may have noticed that a number of media sites in particular can no longer be accessed with ad blocking enabled.

If your website uses ads, you will need to take a business decision on how you react to ad blocking.

2. Mobile is the new normal

In 2015 mobile internet access took over desktop access in many countries, rich and poor. 2015 also saw the rise of mobile-friendly ‘positive discrimination’ by some internet giants such as Google, whose algorithm now penalises websites that are not mobile-friendly. So if you haven’t pressed hard on the mobile pedal yet, now is the time to gear up.

"For government communicators, this means looking at creating a seamless experience for citizens"

Going mobile first is not just a matter of boosting your attractiveness on search engines, it will also increase user satisfaction and the positive perception around your brand. If you work in government, the pressure of accessibility requirements will combine with market pressure to push you to invest heavily in making your online services as mobile-friendly as possible.

3. Live video and living in the moment

Some platforms such as Twitter already play the instant and real-time card, but the live streaming features launched in 2015 – Periscope, Meerkat, Facebook Live and YouNow – have brought the definition of live to a new level, and at a speed unprecedented in the digital world.

Public communicators will need to find new and more efficient ways to embed live into their digital communication strategies if they are serious about using social media in the future. Events are a good place to start, during which user-generated content can turn out quite handy when you don’t have the manpower or the internal agility to arrange for your own live coverage.

With the news in the last few months related to terrorism and migration, and the growing discrepancy between the speed at which people report news and that of official news channels, users will turn more and more to Twitter’s new ‘in the moment’ feature. Did you know that Instagram and Snapchat now also support on-the-go, in-the-moment updates?

4. In-app functionalities to keep you locked-in

Facebook is particularly keen on making sure you stick around to watch the news, read interesting articles, talk to friends and share your own content. In the past, a couple of missing features prevented you from doing this, but 2016 promises to be the year where you can basically do all your daily stuff without leaving the comfort of your Facebook environment.

“Keeping an eye on the evolution of in-app platform features will tell you a lot about the reach and engagement you can expect.”

Sounds scary? Facebook has promised major updates to its social search, and has recently introduced an Instant Articles feature which will allow publishers to push long pieces of content, just as LinkedIn did a year ago with their in-app blogging feature. Other social media platforms are playing along and will penalise you in terms of reach for not using in-app features. Facebook and Twitter are already doing so with YouTube videos, for example, encouraging you to upload the original file to their platform instead. Keeping a close eye on the evolution of in-app platform features will tell you a lot about the reach and engagement you can expect from campaigns on social media in the future.

These three platforms have now enabled in-app advertising, opening the door to a more structured brand presence. What does this mean for government communicators? If you are reaching out to younger audiences, these are now predominantly present on these three channels.

At the Digital Communication Awards last year I was presented with an innovative Whatsapp campaign by a German public service as a means to connect with students about university offerings, so I’m confident the trend will grow in 2016.

As targeting options on most social media channels become more and more refined, content can reach niche markets and audiences in no time. This however comes at a cost and return on investments will have to be properly demonstrated if the time spent on personalising content is to be worth the investment.

Luckily, most social networks still offer some form of targeting or custom visibility to organic content. On Facebook this could be by using language-specific targeting. On Twitter this would involve targeting by country using a specific parameter. Another strategy is to use targeting options available when using third party tools such as Hootsuite or SproutSocial. These however usually come at a cost. Whatever your strategy, it’s clear that you will be throwing money out the window if your content isn’t relevant and appealing to a specific target audience, in a set language and addressing precise needs.

Another way to maximise targeting is to use the tagging features of most social media networks. Twitter lets you tag up to 10 people on a photo, Facebook up to 50. Tagging will not only let you reach your target audiences, it will also help you reach out to multipliers.

Which brings me to my seventh trend: the tagging option is only available if your content includes a photo or a video.

By 2017, video will account for 69 per cent of all consumer internet traffic, according to Cisco. And as much as 50 per cent of video views will be happening on mobile devices in 2016. But as many in the media industry point out, you will need more than to create your own videos to make a difference. Creativity still trumps production and distribution budgets, although not in all contexts.

"Anticipating future trends is not just fun (albeit difficult fun), it's also vital."

It will also become increasingly important to break content into smaller chunks for repurposing and reposting, as the attention span of online users continues to shrink and social media fatigue sinks in. Consider the fate of the once ubiquitous infographic: its length makes it quite unreadable on mobile devices, which has led to a slow and steady demise in favour of simpler diagrams and visuals, mostly presented in landscape format.

8. A shift from campaign to experience

Forget campaigns, look out for experiences! ‘Experience’ is the new buzzword of digital strategists and marketers. What does it mean in practice? It means that rather than trying to reach out to customers or users for a limited period of time through a campaign, communicators and public relations experts would be well advised to look at the whole chain that generates experiences with these customers or users, and improve each of the steps in this interaction with them.

Marketers will look at embedding real-life experiences into digital campaigns. Big data will play a key role for companies as they learn to know more about their customers or users, and the context in which they are in touch with a brand. For government communicators, this means looking at creating a seamless experience for citizens whether they are visiting a public service,  downloading a form on a government site or engaging on social media with civil servants.

While many of you in government or in SMEs won’t see any of these new technologies implemented in the short term at work, those who do will more easily reach above the noise and create memorable experiences for their customers or users.

And as with every communication or outreach effort where the medium is also the message, it will only work if there is true added value in using these new technologies, not because of the hype. At South by South West in Austin (the world’s largest interactive festival)  and at the Digital Communication Awards in 2015, I witnessed several good uses of virtual reality and wearables for marketing purposes, including by NASA to whom I owe my first (virtual) tour of Mars.

10. The 3Ds of government – digital, data and design

As government organisations continue to play catch up with companies to keep abreast of the ever changing technological landscape, they will focus more and more on the 3Ds – digital, data and design – to deliver better, lower cost public services. Digital transformation, big data and design thinking are probably the three biggest concrete translations of the 3Ds in government today.

A recent example of the blending of digital, data and design is the G20 dashboard designed for the G20 in Antalya, Turkey, in November 2015. The true novelty would have been that the dashboard also blends policy data and real-time results of the international negotiations. But that’s probably for 2016 – it’s ok to dream big!

This article is based on Aurélie’s presentation at a seminar on digital communication in public affairs held by the EACD in Brussels in December 2015. To find out more about EACD events visit its online calander.

Aurélie Valtat is the digital strategist for EuropeAid, the EU’s international cooperation and development arm. Previously, she managed digital communications at the Council of the EU and at EUROCONTROL, and was responsible for communications at PostEurop and the Alliance Française in Belgium. She also worked at UNESCO’s World Heritage Centre, reporting on cultural heritage in Asia and the Pacific.