Digital communications are more than a matter of evolving tools and channels; they are an invitation for a whole new conception of the chief communication officer. That message emerged loud and clear on Wednesday afternoon at the latest in the series of #eacd10 events marking the 10-year anniversary of the European Association of Communication Directors (EACD).

Senior communicators from across the Netherlands and beyond came together at the headquarters of landline and mobile telecommunications company KPN to hear about the “changing role of communications in a digital world” directly from communications leaders from Philips, ING Group, VU Medical Centre –one of the country’s biggest and best medical centres – and European digital innovation and entrepreneurial education organisation, EIT Digital.

Taking the opportunity of being the first guest to speak, Dr Edna Ayme-Yahil, head of communications at EIT Digital, urged the audience to consider the broader picture and recognise the necessity to adapt to the digital transformation not just of the communications profession but of society as a whole. Exploring the digital changes to the way we run our companies, the way we cope with well-being and ageing, and the way we live, Edna called on chief communications officers to consider the infrastructure underpinning these changes. “Digitalisation is changing our world in a way that we have never seen before” and we need to seriously consider the social implications of an unready Europe e.g. 200 million Europeans don`t have the necessary digital skills to adapt to the transformational changes to the way we work. After the debate about the communicator’s seat at the executive table, and the profession-wide conversation about integrated marketing, Edna feels that it’s “the next logical step” for chief communication officers to question where society is going and be the harbinger of the outside world to the corporation

When the water breaks

From Edna’s wide perspective, the talk turned to a narrower focus with the next speaker: Jan Hol, senior vice president communications, VU University Medical Centre talked about crisis communications in a new digital context. Last year, the VU University Medical Centre found itself at the centre of the country’s biggest emergency in 2015: a severe and sudden flooding that inundated the hospital with tens of millions of litres of water in a matter of minutes, leading to the emergency evacuation of hundreds of patients and the involvement of the marine forces. From the beginning of the emergency, the Medical Centre’s employees posted video footage on Facebook and YouTube, presenting a sharp learning curve to Jan's team, as their social communications was largely omitted by compliance-based do’s and don’ts. As Jan elaborated to Communication Director after his speech, although the Medical Centre has guidelines about social media usage, in such a one-off crisis "everyone is disruptive in their behaviour”. The lesson? Communicators need to be as available as possible online to their most important stakeholders and in that way impact – never confine – the conversation: as Jan put it, “if you start to supply all kinds of dialogues yourself, they become part of the only personal conversation.” 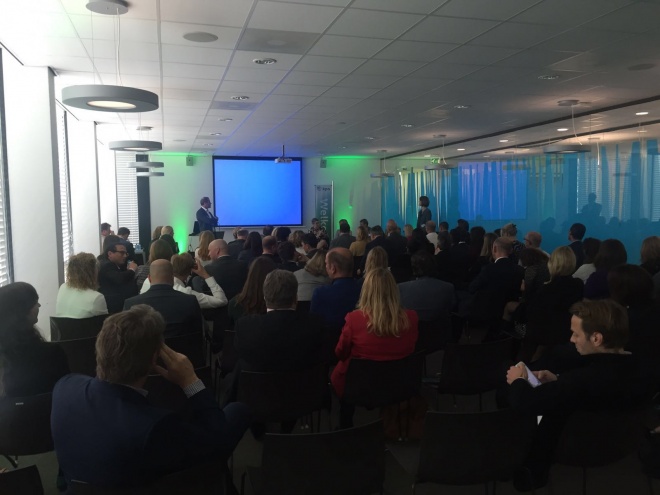 An appreciative audience at the #eacd10 event in Amsterdam

From the social context of the role of the chief communication officer, to the use and abuse of digital in a crisis, the conversation then turned to the structural impact digital innovations have on the communications function itself. Johan van der Zanden, director of communications at ING Netherlands, believes that collaboration between in-house communications departments and digital consultancies is not enough: “we have to change ourselves”. Even the physical environment of ING’s offices have been rethought in order to take advantage of the new ways of working made possible by digital. Flexible and autonomous teams are given a lot of freedom and responsibility to realise innovation and improve the customer experience. Every employee has become a brand ambassador and has all kinds of digital instruments to communicate inside as well as outside the bank. This degree of autonomy, however, first requires alignments: because audiences see all messages, not just the ‘official’ ones, all messages need to project a uniform picture of the organisations. The organisation’s purpose and culture are drummed into employees so that the team sing from the same song sheet. Johan sees ING as a “conversation company”: his communications team now enable staff to communicate for the entire organisation. An interesting side note. what people want to talk about is often different form what the communications experts expect: an example he gave is CEO blogs which were not as popular as short articles on financial advice.

Last to take the stage was a representative of another massive Dutch-based company. Nanda Huizing, head of brand, communications and digital at Philips BeNeLux. In a week of heated speculation about the sale of Philips’ Lighting division, Nanda reflected on the company’s journey to being, effectively, a big data company. As Nanda put it, today’s digitally empowered consumers move at their own pace, when and wherever they want, and are influenced by many sources. This demands a different mindset from communicators, including integrated campaigning with all touch points aligned, very clear target setting and measurement in real time. Like Johan, Nanda stressed the need for the organisations purpose and values to be made loud and clear across all the fragmented digital channels, and she also detailed how to achieve this authentically (“talk about the product without talking about the product” was the message, as Nanda showed the audience snippets of videos focussed on patients telling their own story).

We'll be sharing more content from this event, including in-depth interviews with the speakers, in the coming days and weeks, so watch this space. Thanks to Hans Koeleman, Caroline Kamerbeek and Koenraad van Hasselt for organising the event and to the entire KPN team for arranging sthe seemless proceedings. For videos and tweets of the event, be sure to visit the Facebook and Twitter pages of the EACD. Find out more about the EACD's next anniversary event in Sofia here.