Every year PwC asks CEOs worldwide about their hopes, aspirations and concerns.The results are a fantastic resource for communications. 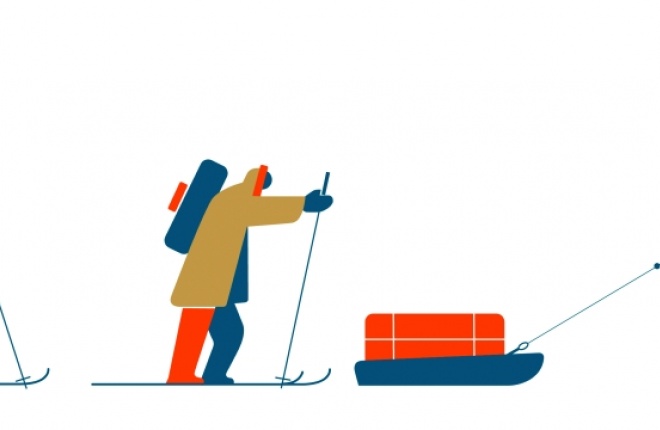 Picture the scene. It is 20 January 2015, on the eve of the World Economic Forum’s annual meeting in Davos, Switzerland. In the glare of the world’s media, and with live webcast coverage being streamed to a global audience, PwC global chairman Dennis Nally takes to the stage to present the findings of PwC’s 18th Annual Global CEO Survey.

In communications terms, it’s a dream scenario. This is the 18th year in which we at PwC have produced the Annual Global CEO Survey – meaning it has a longevity that has helped to make it the most credible and respected annual study of CEO sentiment across the world. And for many years we’ve released the findings at Davos, a crowded media space packed with individuals and organisations vying for coverage. With the launch of the survey established as a ‘calendar’ event that journalists associate with the opening of the WEF, we’re able to generate press coverage around the event that we might otherwise struggle to create.

What CEOS are saying: mixed confidence over the global outlook…

So, what did this year’s survey tell us about the issues that are front-of-mind for business leaders worldwide? The top-line finding was that CEOs as whole are less optimistic about the global economy for 2015 than they were the year before – but that confidence in the growth prospects for their own companies is holding firm. The research found that 37 per cent of CEOs think global economic growth will improve in 2015, down from 44 per cent the previous year. And 17 per cent of CEOs believe global economic growth will actually decline, more than twice as many as the year before. The remaining 44 per cent expect economic conditions to remain steady.

Equally significantly, the results reveal wide variations in economic confidence between different regions. CEOs in Asia Pacific are the most optimistic about the global economy, with 45 per cent of respondents based there anticipating an improvement, followed by the Middle East (44 per cent) and North America (37 per cent). Conversely, only 16 per cent of CEOs in central and eastern Europe expect the global economy to improve. Also, CEOs in emerging economies like India (59 per cent), China (46 per cent) and Mexico (42 per cent) are more optimistic about the economy than those in developed economies like the US (29 per cent) and Germany (33 per cent).

…while still bullish about their own businesses’ growth prospects

Despite the overall decline in optimism over the global economy, we found that CEOs worldwide remain confident about prospects for their own company, with 39 per cent saying they’re very confident that their company’s revenues will grow in the next 12 months. That’s the same percentage as last year, and up slightly from 36 per cent in 2013.

Looking at the responses by region, CEOs in Asia Pacific (45 per cent) are the most confident about their businesses’ growth, ahead of the Middle East on 44 per cent and North America on 43 per cent. CEOs in western Europe (31 per cent) and central and eastern Europe (30 per cent) are less optimistic.

There are equally interesting findings on where CEOs expect to find growth. Globally they rank the US as their most important market for growth over the coming year, putting it ahead of China for the first time since we started asking this question five years ago. Overall, 38 per cent of CEOs put the US among their top-three overseas growth markets, compared with 34 per cent for China, 19 per cent for Germany, 11 per cent for the UK and 10 per cent for Brazil.

Some top issues for CEOs: regulation and competition…

Every year, an area of particular interest among readers of the Annual Global CEO Survey – not least the media – is CEOs’ responses on the issues that worry them most. This year, over-regulation tops their list of concerns once again, cited by 78 per cent worldwide. This is up by six percentage points from last year, and the highest level ever seen. Countries where concern about over-regulation is particularly high include Argentina (98 per cent), the US and Germany (90 per cent), the UK (87 per cent), and China (85 per cent).

The evolving competitive landscape is a further key focus. One-third of the CEOs we interviewed worldwide say their company has entered or considered entering one or more new industries in the past three years, and more than half (56 per cent) believe that organisations will increasingly compete in new sectors in the next three years. And almost a third (32 per cent) of CEOs think a significant competitor to their business is emerging – or could emerge – from the technology sector.

…alongside digital transformation  and talent  diversity 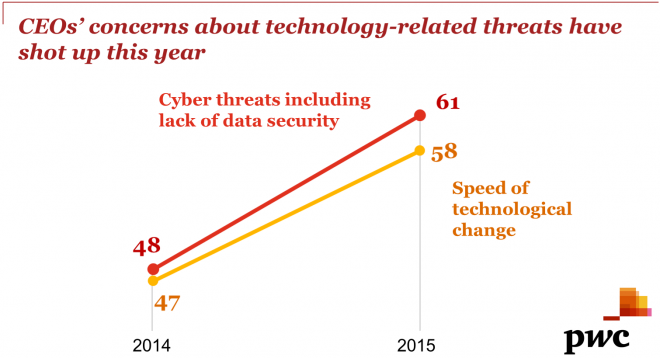 Intensifying cross-sector competition clearly reflects the emergence of digital technology – and 58 per cent of CEOs in this year’s survey say they’re concerned about the speed of technological change, up from 47 per cent last year. They’re even more worried about cyber threats. Asked what technologies are most important to their companies, 81 per cent of CEOs cite mobile, followed by data mining and analysis, cybersecurity, socially-enabled business processes and cloud computing. Overall, CEOs know they need to put technology at the core of their business to create value for customers.

CEOs also know their businesses need more diverse and adaptable talent if they are to thrive in today’s environment. Half of CEOs around the world intend to increase their headcount over the next 12 months, while 21 per cent expect a decrease. As CEOs seek to meet the challenge of finding the right people, 81 per cent say they’re looking for a broader range of skills. Nearly two-thirds (64 per cent) have a diversity and inclusiveness strategy – but nearly a third don’t. Of those who have such a strategy, 85 per cent say it has improved their bottom line.

The depth and richness of the Annual Global CEO Survey means the data lends itself to detailed analysis, often revealing significant differences between sectors and geographies. For example, this year’s study shows that entertainment and media CEOs are more concerned than any other sector about competition from the technology industry, with over half – 55 per cent – citing this as a concern, against 32 per cent overall. They’re also more likely than other industries to consider partnering with a competitor (34 per cent versus 23 per cent overall).

We also find some sectors are much more confident than others: 72 per cent of CEOs in the chemicals sector think there are more growth opportunities today than there were three years ago, versus just 61 per cent of the overall sample. And some industries are especially concerned over particular issues: 91 per cent of CEOs in insurance see overregulation as a threat to their growth prospects, more than in any other sector. Such insights are hugely valuable both to our clients and also to PwC in advising them.

…and between countries across Europe

Further striking contrasts emerge between CEOs in different countries, even within the same region. In Europe, for example, CEOs in the UK are very concerned about the negative impact that the skills shortage may have, with 84 per cent citing it as a key business threat. But in Germany only just over half (54 per cent) of CEOs are concerned about a lack of skills, while in France the level of anxiety about this issue is even lower, with only 37 per cent expressing concern about the availability of key skills.

Confidence levels show similar variations. At 23 per cent, the number of French CEOs very confident of their company’s revenue growth in the next 12 months is 16 points below the global average (39 per cent), while the figure for German and Spanish CEOs is 35 per cent, and the UK is exactly in line with the rest of the world at 39 per cent. By contrast, CEOs in Romania are more confident of revenue growth in the coming year than the global average, with 44 per cent saying they’re very confident.

The findings also reveal instances where the views of CEOs in European counties have undergone dramatic shifts over the past year. For example, we noted earlier that the country where CEOs are the least confident over revenue growth for 2015 is Russia, where only 16 per cent of CEOs are ‘very confident’. This represents a dramatic reversal from last year’s study, which found that Russia’s CEOs were then the most optimistic in the world, with 53 per cent voicing strong confidence over the short-term revenue outlook.

A resource for communicators

The range and diversity of insights in the Annual Global CEO Survey mean it presents an invaluable resource for communicators across PwC, in every region, industry and line of service. From its launch each January, the study enables PwC to set a consistent agenda for our communications globally throughout the year, providing a solid base of research for the network’s points of view across a vast range of sectors, offerings and topics.

So, what do our communications around the survey look like? Their sheer variety – from teaser campaigns and industry or country cuts of the findings, to mentions in a range of thought leadership materials – makes it hard to generalise. However, it’s possible to pick out some themes that apply across the global, country, industry and service perspective.

One is our use of the launch of the survey to gain exposure for our experts. The high-profile release of the findings enables us to get comments from our people into the media, about what’s on the agenda of leaders in their own territory, industry or area of specialism, and what they should be thinking about.

The survey is also a rich source of data that allows us to generate follow-up stories about industry sector trends or themes such as skills or technology. At the same time, we slot the findings into press releases and stories, to put more meat on the bone or give more of a tangible hook where the subject matter may be relatively conceptual. And we continue to draw on the findings for opinion pieces, blogs, speeches and social media activity throughout the year.

When PwC launched the Annual Global CEO Survey, we had little idea what an outstanding resource it would eventually develop into for communications across the entire organisation. Eighteen years on, we can only commend the foresight of the pioneering people who created it.

The full PwC 18th Annual Global CEO Survey with supporting graphics can be downloaded at www.pwc.com/ceosurvey.