The art of communicative leadership

History provides plenty of great (and not-so-great) examples of leaders who knew the power of communication. 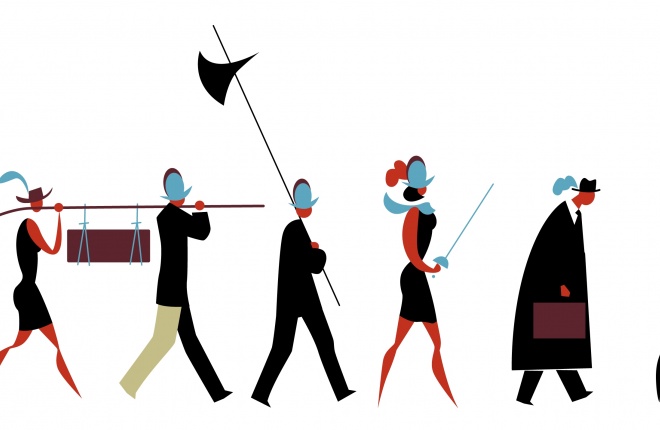 “The difference between mere management and true leadership is communication.”

This quote is from one of the greatest communicators of all time, Sir Winston Churchill. During the second world war the radio was the only broadcasting channel where speeches could be transmitted directly to the public. When the British prime minister spoke, millions of people gathered around their radio receivers. In times of hopelessness he injected courage and spread hope throughout the world. He was honest and consistent in his messages and clear about the sacrifices needed to reach victory.

To this day Churchill remains a relevant example of communicative leadership. In spite of the fact that he had mostly bad news to convey, he managed to mobilise not only his own nation but the whole world in his campaign against evil. His communication skills played a critical role in his leadership. Churchill embodied determination and victory when all odds were against the Allies, and by talking directly to the public he showed true leadership. He understood that the support from the general public was crucial to endure and ultimately win the war.

From a communications point of view his speeches and radio appearances were masterful and some of his vigorous statements have become classics. Churchill knew what to say, how to say it and when to say it. He spoke out of conviction, straight from the heart and seemingly without political calculation. He was also candid about the seriousness of the situation and the tough times facing his countrymen. It was not only the British prime minister people heard on the radio; it was a statesman and leader of the free world.

According to a survey in the European Communication Monitor 2014, the two most important characteristics of effective leaders are communicating in an open, transparent way and providing a clear overall, long-term vision. By these measures Churchill would easily have qualified as an effective leader today. The same survey shows that trustworthiness tops the list of most important attributes for demonstrating leadership. In Churchill’s case, his determination and the authenticity of his leadership gave weight to his messages.

More recent examples from British politics where communication skills have played a cardinal role are Margaret Thatcher and Tony Blair. They both successfully reformed their parties and ran effective campaigns to get elected, first as leaders of their respective party and later on as prime ministers. In politics internal communication campaigns to win support from party peers pave the way for party leadership. After that, more external communication measures take over in order to win confidence among a majority of voters.

Both Thatcher and Blair were authentic leaders and excellent communicators. They both represented new ideas and change – albeit from different ideological standpoints – and they both managed to get re-elected twice as prime ministers. Clearly, their communication skills played a decisive role in their success.

Another top five characteristic of effective leadership, according to the European Communication Monitor 2014, is aligning what is said and done. Newly elected politicians are no exception to that rule. Once elected, both Thatcher and Blair went on to deliver the changes they had promised. In Thatcher’s case, an unforeseen war with Argentina over the Falklands cemented her image as an iron lady. For Tony Blair, his support of the invasion of Iraq – a decision based on misleading information about weapons of mass destruction – damaged his trustworthiness and eventually led to his resignation.

Gordon Brown, Blair’s eager successor as party leader and prime minister, failed to keep up the trust from the voters that had kept Labour in power for so long. Brown is an interesting case from a communications point of view. As Blair’s chancellor of the exchequer, ever since Labour returned to power in 1997, Brown enjoyed a solid reputation as a trustworthy and knowledgeable second-in-command and earned global status as one of the world’s most respected finance ministers. That changed dramatically when he finally became prime minister in 2007. Brown was clearly more suited to deal with facts and figures concerning the British economy, than assuming a role as leader and visionary. As a communicative leader, he was no match for Tony Blair nor Tory leader David Cameron, who defeated him in 2010.

One-term US President George HW Bush, who led a coalition of allies through a successful military operation against Iraq’s invasion of Kuwait in 1990-1991, is another example of how quickly popularity can fade. Widely respected and regarded as a thoughtful and accomplished leader, Bush lacked the authenticity and communication skills of his predecessor Ronald Reagan.

After winning the war in the Gulf, Bush’s approval ratings skyrocketed and his re-election in 1992 seemed certain. If it hadn’t been for a great communicator from Arkansas. Representing renewal, Bill Clinton ran an effective campaign on domestic issues. Soon, Bush’s accomplishments in foreign policy were overshadowed by rising unemployment, budget deficits and slow economic growth. Clinton seized the initiative in the campaign and capitalised effectively on US domestic problems. He appealed to hard working middle class Americans who struggled to make ends meet. His communicative skills were superior to the more aristocratic Bush, who seemed out of touch with ordinary people’s lives.

Eight years later, history repeated itself somewhat when Al Gore failed to capitalise on the accomplishments of the Clinton administration and narrowly lost to George Bush Jr.

The exposure that radio and television introduced into politics in the 20th century dramatically changed the preconditions for campaigning and getting elected. Substance remains fundamental, but appearance and good communication skills have become more and more important. A famous example is the first televised debate between US presidential candidates Kennedy and Nixon back in 1960. A handsome, tanned and relaxed John F. Kennedy appeared more trustworthy to the viewers than a pale, sweaty and nervous Richard Nixon. Kennedy clearly came across as the winner on television, while most radio listeners pronounced Nixon the winner of the debate.

Political leaders are of course more scrutinised and subject to much more exposure in the media than leaders in the business world or public sector. The prerequisites are different but the mechanisms of communicative leadership are similar. Successful leaders understand the importance of trust and support from their staff in order to get things done. One pivotal objective of communications is to inspire and empower people. Apple’s Steven Jobs and Virgin’s Richard Branson are prime examples of entrepreneurs who obviously have been very successful at that. They have both built brands worth fortunes and their enterprises continue to be successful and attract competent people from all over the world. That is what communicative leadership is about: empowering people to cooperate decisively towards common goals. For example, Richard Branson rarely misses an opportunity to emphasise that success in business is all about people and that a company’s employees are its biggest competitive advantage. That, in itself, is an example of communicative leadership.

The role of top management is to stake out the path towards success, but without aligned subordinates and frontline soldiers not much will be accomplished. Successful communicative leadership is not only a question of being a good leader and a skilled communicator; it is about supporting others to be good leaders and skilled communicators, too  It is about building trust, being visible and continuously injecting confidence throughout an organisation.

Middle management plays a key role in this process. At the middle management level overall objectives and high flying visions must be broken down into concrete measures people can relate to in their daily work. Middle managers must do this convincingly and pass on the torch to lower level supervisors and employees. Communicative leadership, therefore, may look different at different organisational levels. While top management paints the bigger picture, middle managers are the ones who are supposed to deliver results. But the common denominators for effective leadership, such as trustworthiness, honesty, integrity and commitment, remain the same regardless of organisational level.

Numerous surveys have shown that most major change initiatives in large organisations fail because of lack of alignment and gaps in internal communication processes. Changes must be known, understood and embraced at all levels in order to be accomplished. That requires communicative leadership in different shapes at all levels.

Many of the most visible examples of communicative politicians and leaders are found in movements for social change: the oppression they face and their struggles for justice make for compelling narratives. Martin Luther King, Mahatma Gandhi and Nelson Mandela all demonstrated brilliant communicative leadership which brought hope and eventually change for millions of people. Another example is Czech dissident and playwright Vaclav Havel, who endured decades of communist oppression before being elected president in 1989. His solid record of honesty and decency stood in sharp contrast to the authoritarian rulers he replaced and was of paramount importance in building a new nation based on democratic values. Like Churchill during the second world war, Havel offered hope and trustworthiness, something his countrymen weren’t used to.

Throughout history, good communication skills have also been misused to seduce the public for evil causes. Hitler is an obvious and terrifying example, but there have been numerous other more or less ruthless rulers, such as Iraqi dictator Saddam Hussein, the Shah of Iran and his ouster Ayatollah Khomeini, Cuba’s Fidel Castro, Italy’s fascist dictator Mussolini, China’s Chairman Mao, Lenin, who led the Russian revolution in 1917 and North Korea’s Kim Il-sung, the first dictator in a dynasty still in power. Many of these were shrewd communicators and came to power with public support. Egyptian president Nasser, who seized power in the 1950s, emerged a hero in the Arab world in spite of having been humiliated in the 1967 war against Israel.

Political rhetoric should of course not be confused with communicative leadership in private and public sector organisations. Still, there are lessons to be learned from Churchill and others: honesty, transparency and integrity, for instance. Being visible and taking responsibility. Clear messages based on substance put into larger contexts. And, equally importantly, continuous feedback to employees and other stakeholders.

What we can also learn from famous leaders is that communicative leadership is not about telling people what to do; it is about inspiring people to perform at their very best, and then some. Organisations where such leadership is fostered will no doubt have an advantage in the marketplace, as well as in public opinion.

Churchill’s greatness as a leader was his ability to unite people and make them excel themselves. And every time they did just that, he acknowledged their achievements publicly, which injected even more hope and inspiration to others. Feedback is crucial.

Communicating objectives and hard facts, such as budgets, plans and results, is the easy part of leadership. To create – and sustain – an inspiring working environment, where people thrive towards excellence is a different story. Or as Åge Hareide, the coach of Swedish football team Malmö FF, who qualified for the championship league last year, put it: “You have to create an atmosphere people want to be part of”. That, in a nutshell, is communicative leadership.

Claus Grue is director of communications at the Diocese of Lund, Church of Sweden. His working history also including positions at Scandinavian Airlines, G4S and the public Swedish health care as well as journalistic experience.