Lessons from the podium

A music lesson in leadership styles 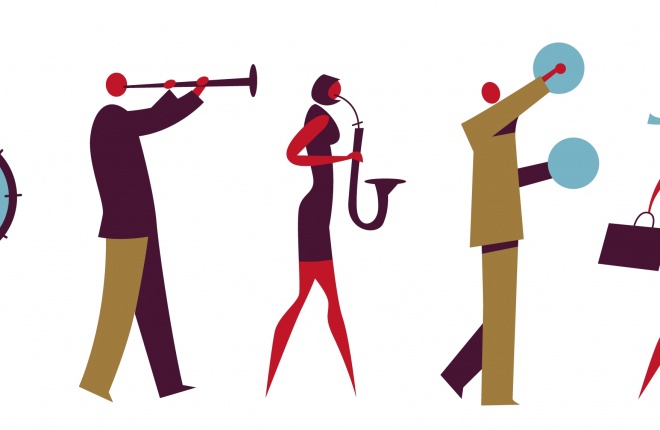 Itay Talgam explores organisational behaviour and inspired leadership through the prism of the symphony orchestra and asks: what can the baton teach business about communicating leadership?

Running through The Ignorant Maestro is the idea that a great conductor – and by extension a great leader – is more concerned with building up a certain level of excellence and then almost stepping back and allowing players or employees to excel on their own terms. Is that an accurate reflection of your book’s message?

My idea is that any leader’s challenge – a conductor is no exception – is to help their people to emancipate themselves. Not to grant them emancipation: that is meaningless, since every emancipation is self-emancipation. By emancipation I mean not only a certain liberation from control by authority, but also the ability and will to be autonomous and exercise self control. So the leader has to work towards building the capacities needed for that: professional skills, self-confidence and, most importantly, the will to self-emancipate. The individual level is an essential component (in working toward that, the conductor is like an educator) but of course the organisational level is the supreme test for a leader. How to help the whole team emancipate itself, to come alive, having not only high professional capacities but also an emerging combined will? When this is achieved – something that should take some effort – then the conductor can step back and have a dialogue with that combined will, and with every individual’s will as well. The combined will does not replace the individual, they nurture each other.

You’ve written “The challenge of leadership in business, as in music, is to transform meaningless voids into meaningful gaps” – can you expand on that?

Voids are defined negatively as something missing, something that should have happened but didn’t, as in “No one told us what was going on, or what to do”. This means that people feel powerless and in need for interpretation of reality and instruction as to next steps. Gaps are different: the same factual situation which was perceived as a void presents itself as a space for learning, discovery, and creation. What constitutes the difference in perception of reality between the paralysing void and the opportunity of the gap is the mindset of the people, which is the leader’s challenge to help create.

You write about six legendary conductors and their own individual styles: Richard Strauss, Arturo Toscanini, Ricardo Muti, Herbert von Karajan, Carlos Kleiber and Leonard Bernstein. Why did you choose these six in particular as case-studies for leadership?

These six conductors constitute a kind of Pantheon of leadership styles. They can serve us as rich archetypes we can observe and see our own reflection. In that sense they are timeless, a bit like the heroes of Greek mythology.

Two of these six were composers as well as conductors. Did Strauss and Bernstein have a deeper level of insight into conducting because they were also celebrated composers?

I think as composers they did have a different perspective than other conductors, but it drove them towards opposite conclusions. Strauss, having suffered from what he regarded as over-interpretation of his music, chose to eliminate all spontaneity from the performance. In other words, he expected execution only – not interpretation – from his players. Bernstein took the opposite approach: every note had to be infused and radiate living emotion. His people were expected to love and desire (and hate and fear), sharing with him and the audience the inner story of the music.

There are a few video clips on YouTube of Richard Strauss conducting his own work in a manner that suggests a bored bank accountant, not at all what we’d expect from the composer of Salome and Elektra. What is the value in this seemingly self-effacing leadership?

I think his conducting, especially toward the end of his life, is an expression of deep scepticism, brought about by his own personality combined with extreme circumstances – Germany in the 1930s and 1940s. He seemed to have emptied his professional attitude to his collaborators from any human contact, and have replaced it with a kind of formal, almost bureaucratic expectation that every one should just work by the rules: play by the book!

Acting as polar opposites to this self-effacing style are the examples of Karajan or Muti. Are we still in thrall to the image of the autocratic conductor?

Despite Strauss’ extremely minimal bodily gestures and his detached manner – none of Muti’s commanding gestures and none of Karajan’s guru-like suggestive mannerism – he is still very much like them in aiming for having maximum control and zero openness to unpredictable contributions by any of the stakeholders.

In your chapter on Toscanini you write about the conductor as a father figure presiding over a family. To what extent does the rise of female conductors – such as Marin Aslop from the US, Simone Young from Australia, Xian Zhang of China and Emmanuelle Haïm of France –present a challenge to this patriarchal model of leadership?

I think this is not a question of gender at all: replacing ‘patriarchal’ with ‘matriarchal’ in itself would not create any deep change (I’m certainly not suggesting that this is what the above mentioned female conductors do!). What needs to change is the culture, including the division of labour, in the broadest sense – in politics, business, education – that puts a few in charge with challenging, well-paid jobs and then most people in jobs that do not allow them to grow and from which the feel alienated. Female and male leaders need to work together to change the prevailing culture.

Which of the six conductors included in The Ignorant Maestro is your favourite and why?

My own mentor, Leonard Bernstein, has to be my favourite, because he enabled me to find meaning in what I do. I have to admit that with Lenny every moment was so charged – in music and life alike – that it became somewhat difficult to see beyond the ‘now’.

Is there another conductor that you would like to have included but you didn’t have room for in the book?

Claudio Abbado. I admire his way of creating music with people, seemingly not telling what to do but rather listening in a way that makes everyone else listen – he is maybe the perfect keynote listener. Why is he not in the book? Maybe because I could not find an adequate way of describing how he does that – it is something I experience more than I understand.

YouTube has a trove of rehearsal footage featuring the conductors named in this interview, giving further insight into the way these individuals led a disparate group of players to achieve excellent music-making.

Itay Talgam is a conductor, speaker and consultant. He started out as a pianist, but switched to conducting after his military service in the Israel Defence Forces. He has worked with many orchestras in Europe and Israel, and was the first Israeli conductor to perform with the St. Petersburg Philharmonic Orchestra and the Leipzig Opera house. He gives seminars and workshops on business and the workings of the symphony orchestra.