Positioning the issues of the day within the context of your brand strengthens your position. 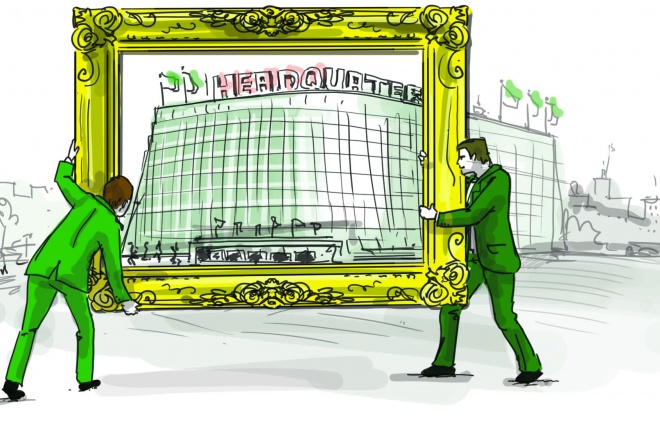 Corporate branding typically involves the management of mental associations that organisational leaders want important audiences to hold about the organisation.

Managing such mental associations, however, is becoming more complicated, given that companies are increasingly confronted with sensitive societal issues such as climate change, human rights in developing countries, and consumer health. In these circumstances, companies are increasingly compelled to explain to stakeholders what their brand stands for when it comes to important societal issues.

Shell, for instance, clearly started to realise this during the Brent Spar crisis in 1996. During this crisis, Greenpeace occupied one of the company’s oil platforms to plead against Shell’s decision to sink the aged, off-shore oil platform to the bottom of the North Sea. By physically occupying the oil platform and making astute use of emotional appeals via the media, Greenpeace managed to control society’s perceptions about Shell. Because the company had been silent for so long with regards to its stance on important societal issues, shaping perceptions about Shell was a relatively easy job for Greenpeace. The crisis was a moment of truth for Shell’s top management: the company needed to become more voluble about who it is and its role vis-à-vis society.

Besides Shell, many other companies have come to realise the importance of openly explaining the company behind the brand, instead of letting the external environment define who they are. For example, pharmaceutical companies understand that stakeholders expect them to join the global debate on rising medicinal costs and to articulate their position on this issue. Car manufacturers know that they can no longer refrain from taking a stance on climate change, or on the problem of increasing traffic density in highly populated cities. And fashion firms are increasingly compelled to have strong standpoints, values and codes of conduct when it comes to the production of their clothes in sweatshops. Companies like these have started to put a lot of effort into connecting their brand to key societal issues.

Until recently, dealing with societal issues was mainly a strategic task of the public affairs or public relations departments. Companies in industries like oil and gas, tobacco and pharmaceuticals have traditionally spend huge amounts of money and other resources on lobbying, financial support for political candidates, and constituency building. These companies have been used to these types of activities, because they are historically faced with socio-politically sensitive issues which can threaten their legitimacy (social acceptance in society).

However, other types of companies have also been increasingly addressing the social and political environment in which they operate, not just to protect their legitimacy but increasingly also to gain a strong and recognisable position on a societal issue for their brand. For instance, General Electric launched its “Ecomagination” programme in 2005. The company’s expressed intention behind “Ecomagination” is “to imagine and build innovative solutions to today’s environmental challenges”. In other words, companies are increasingly being proactive instead of reactive in explaining their positions on societal issues.

Given these trends, it is no longer the sole responsibility of the public affairs or public relations departments to manage societal issues in directions desirable for the company, but of all corporate communication functions, including corporate social responsibility, communications, issues management, and corporate branding. It has become increasingly important for organisations to build a firm and consistent standpoint regarding societal issues around their corporate brand. As such, corporate branding has become an important way through which companies seek to express and further discuss this standpoint with critical stakeholders. This article intends to provide insight into the managerial activities that corporate brand managers should engage in, to manage the company’s position vis-à-vis societal issues.

Positioning the company’s point of view

Several recent academic studies have focused on how organisations can not only clarify their positions on a societal issue, but also influence the public opinion on this issue in their favour (which was excellently reviewed in 2003 by C.T. Salmon, L.A. Post and R.E. Christensen in “Mobilising Public Will For Social Change”, Michigan State University). These include works related to issues management, institutional discourse, (organisational) agenda setting, and social capital. A common understanding within these research streams is that the way through which companies can create understanding and support around their social positioning is through the production and spreading of meaningful texts (e.g., corporate advocacies, corporate advertorials, speeches, social reports, opinion articles and social media).  An important mechanism that companies use in the production of these texts is framing.

R.M. Entman has defined framing as the selection of “some aspects of a perceived reality and [making] them more salient in a communicating text, in such a way as to promote a particular problem definition, causal interpretation, moral evaluation, and/or treatment recommendation for the item described” (“Framing: Toward clarification of a fractured paradigm”, Journal of Communication 43(4), 1993). It is particularly through the act of framing that corporate brand managers can clearly position the company’s point of view on societal issues, in order to build understanding and support among important constituencies. So, how can corporate branding professionals use different types of framing?

Between the abstract and the concrete

While various studies have focused on the important role of framing within societal debates, Salmon, Post and Christensen offer an interesting way to look at this question from a corporate branding perspective. They suggest that framing can serve several goals, such as 1) defining the scope of the issue (broad versus narrow), 2) suggesting proper ways of dealing with the issue and 3) making sure that the issue gets picked up by the media. With respect to the first goal of framing, sometimes it is to a company’s advantage when a particular issue is seen as broadly relevant to society, whereas in other cases this would be detrimental for the company.

Generally, prior research has shown that issues defined in simple but abstract terms tend to be seen as more broadly relevant than issues defined in complex, concrete terms. This is logical because simple, abstract terms are almost by definition applicable in more situations than complex, concrete ones. For instance, in the beginning of 2000, BP summarised their standpoints and different activities related to alternative energy as “Beyond Petroleum”.

“Beyond Petroleum” is much more abstract than ‘solar energy’, ‘gas’, ‘wind energy’ or ‘hydrogen’. By framing their standpoint in more abstract than concrete terms, they aimed to broaden the scope toward the socially-relevant issue of alternative energy, although at that time their strongest focus with respect to alternative energy was gas and solar energy. However, the abstractness of their communicated frame also bore a great risk: many target audiences understood the new frame as if the company was moving away from oil completely. It took the company much effort to explain to audiences that this was not the case. This example shows that carefully defining the scope of a company’s societal positioning is highly relevant to building understanding and support among stakeholders.

Corporate brand managers should use a frame that is abstract enough to resonate within the broader societal debate, and concrete enough to build an adequate understanding of the company’s standpoint.

In addition to defining the scope of an issue, framing can also be used to suggest the proper way of dealing with an issue. Suggesting proper ways of dealing with an issue is important because it enables companies to direct the societal debate on the issue in desirable directions. In negotiating toward such proper ways of dealing with an (undesirable) issue, framing can help to first define what the cause of the issue is (‘diagnostic framing’), how the issue can be solved (‘prognostic framing’) and what would be the best way to work toward a solution (‘motivational framing’) (see R.D. Benford and D.A. Snow, “Framing processes and social movements: An overview and assessment”, Annual Review of Sociology, 26, 2000).

For example, the international express service company TNT frames poverty issues as “Solving hunger is a matter of logistics”. This way of framing suggests that the cause, and the solution, of the issue is not necessarily the availability of food, but the logistic problem of bringing food to the right places. TNT’s framing was not only clever in terms of corporate branding purposes (TNT’s core business is logistics), but also acted as a springboard for conversations with NGOs, third-world governments and other key stakeholders.

Finally, framing can also be used to influence the probability that a news story will be picked up by the media. As such, companies can aim to create their own ‘protagonist’ role in dealing with important societal issues (as described by V.P. Rindova, T.G. Pollock and M.L.A. Hayward in “Celebrity firms: the social construction of market popularity”, Academy of Management Review, 31, 2006).

Journalists are constantly on the look-out for stories with ‘news value’, and this value can sometimes be created through relatively simple aspects like emotionally appealing stories or surprising twists in a story. For instance, through a clever viral commercial, Dove (the personal care brand owned by Unilever) showed a “one-minute story” of a woman being ‘transformed’ into a conventionally-attractive billboard model through artificial techniques. The story ends with the pay off, “No wonder our perception of beauty is biased”.

The idea was that by showing the artificial process behind beauty, audiences would see that the fashion models they see are far from realistic. The campaign created much media publicity, and, as such, gave Dove the opportunity to take a pro-active position in the global conversation on the issue of women’s self-esteem and issues such as anorexia. These are issues that organisations that produce personal care, fashion or cosmetic products are increasingly confronted with.

In this article, we focused on framing as one central aspect of building a strong corporate brand around a specific societal issue. While corporate branding encompasses more than framing, it is a crucial aspect that corporate branding managers should take seriously. Framing should not be seen as just a textual exercise in order to build favourable associations in the mind of stakeholders.

The potential of framing reaches much further, if corporate brand managers take the framing goals as earlier described in mind. While the three suggested framing tasks are by no means comprehensive, they do offer corporate brand managers valuable directions to: create attention within a specific societal debate, gain share of voice in this debate, build understanding and support around the company’s standpoint on the debated issue, and even steer the debate within desirable directions.