Trust in media across Europe

According to a new report by the European Broadcasting Union, the trust gap between traditional and new media is widening 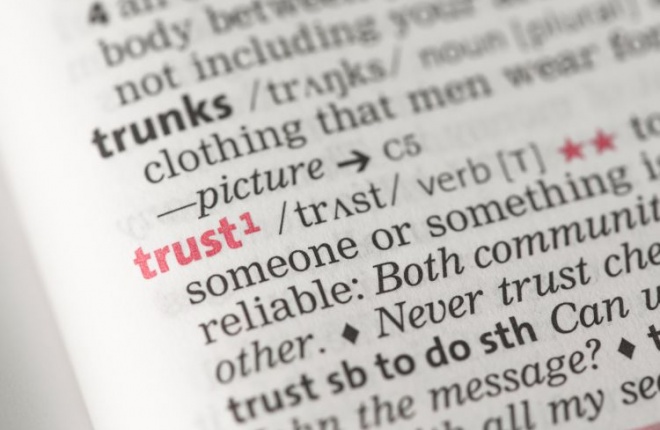 Across Europe, the trust gap between traditional and new media is widening, finds a new report by the European Broadcasting Union. To what extent is this related to the rise of fake news, and what are the prerequisites for a more trustworthy media?

“Fake news” is the buzz-phrase of our time. US president Donald Trump regularly uses it to disparage traditional media – but is he reflecting what the public also believes, that you just can’t trust the old familiar names anymore?  With millions of us glued to tablets and phones every day and the huge amounts of information now at our finger tips, you might expect trust in traditional media to be eroding. In fact the opposite is true. Public trust in traditional media (broadcast media and the press) actually increased in the last year as trust in the internet and social networks continued to fall.

That’s according to a study – Trust in Media 2017* - conducted by the Media Intelligence Service of the European Broadcasting Union (EBU).

You might have heard of us if you’re one of the 180 million people who saw the Eurovision Song Contest in May. We’ve organised the world’s biggest music entertainment event every year since 1956, but we do a lot more besides.

The EBU is actually the world’s leading alliance of public service media with 73 members in 56 countries across Europe, the Middle East and North Africa. We offer our members a huge variety of services including co-productions such as the Song Contest but also a news exchange to share footage, networking events to explore best practice and aid digital transformation and we help to set industry technology standards in areas like digital radio and HD television.

With this mission in mind it is reassuring that the study reveals broadcast media remains the most trusted media throughout Europe. 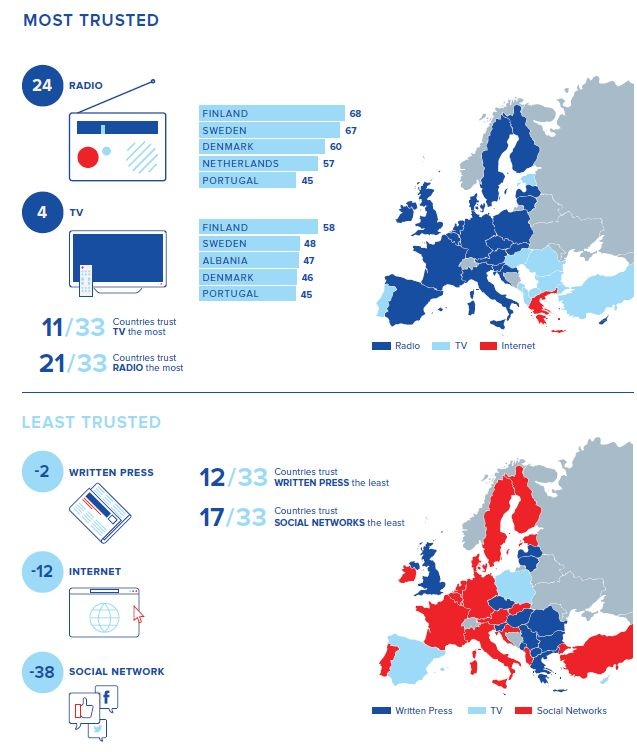 There is a noticeable trust gap between broadcast and new media. While radio and TV are the most trusted media among EU citizens, the internet and social networks are trusted the least. Source: EBU based on Eurobarometer 86 / Download the full report: www.ebu.ch/mis

Radio is the most trusted medium, trusted by 59 per cent of EU citizens, closely followed by television at 50 per cent. In the last five years, trust in both media has continued to grow across Europe.

21 out of 33 countries surveyed rank radio, the oldest broadcast medium, as the most trusted (64 per cent).

Trust in the written press has also increased over the last five years although it is generally still not seen as a trusted medium in most European countries.

There are some significant regional differences in the findings. For example it is mainly citizens in the Balkan countries, together with those in the UK, that show the least trust in the written press, while western European citizens show the least trust in social networks. Trust in radio and television is highest in the Nordic regions. In Finland, for example, 82 per cent of people tend to trust radio and 78 per cent trust television.

The EBU thinks it’s reassuring that the public’s level of trust in broadcast media is actually increasing across Europe. In this post-truth world, it is encouraging to see the public can differentiate between competing sources of news and have chosen to put their trust in more traditional media.

"In this post-truth world, it is encouraging to see the public can differentiate between competing sources of news."

As public service broadcasters, it is the job of our members to cherish and maintain that level of trust and continue to provide impartial, independent reporting to counter the spread of fake news and the limitation of filter bubbles on social media.

Despite their proliferation social networks record a negative trust index in all of the 33 European countries surveyed and are the least trusted medium in 17 of those countries.  The majority of these countries are in western Europe with Sweden and France recording the lowest scores. Bulgaria trusts social media the most with Portugal and Malta also showing an increase in trust year on year.

With this in mind EBU members and public service media in general have a critical role to play in maintaining society’s trust in not only broadcast media but the press and online too. Pluralistic, independent and high-quality news and information is a pre-requisite of democratic societies.

"Pluralistic, independent and high-quality news and information is a pre-requisite of democratic societies."

In another report from the EBU’s Media Intelligence Service correlations were found between countries that have strong public service media and higher levels of trust in media as a whole.

We saw that countries with a strong market share in public service media radio or television enjoyed higher levels of trust in media. The EBU believes the trust people have in  public service media brands will translate to the online world and we will be working with our Members to help them increase positive perceptions across all platforms.

The conditions for trustworthy media

Last month, the EBU launched a Quality Journalism initiative to help members re-define and re-position their offer to audiences in this new multi-platform age. To this end we’ve created new services such as bespoke training courses in the use of social media from the EBU’s Academy and the Eurovision Social Newswire which acts as a user generated content verification network to help broadcasters authenticate news stories with up to 40 cleared videos sourced on social media offered every day.

The EBU also thinks media literacy, education and labour conditions for journalists are essential parts of the solution to counterbalance the proliferation of fake news. The strong values of public service media organisations make them uniquely positioned to lead the way in engendering more trust in the media and in turn remain strong contributors to democracy and societal well-being.

In the battle against fake news it is more important than ever that public service media remains sustainably funded and independent.  It is reassuring that trust in radio and television has risen in the last year and working with our members we are committed to ensuring that growth continues.

*Trust in Media 2017 is based on data published in the 86th Eurobarometer survey and gives an idea of European citizens’ perception of the trustworthiness of different types of media. The survey consists of approximately 1000 face-to-face interviews in the 33 countries covered by the study. The full Trust in Media 2017 report is available at this link: https://www.ebu.ch/publications/trust-in-media-2017 (log in required)

David Goodman is a senior communications officer at the European Broadcasting Union (EBU) headquartered in Geneva. Before arriving at the EBU, he spent most of his career as a radio journalist for European public service broadcasters including the BBC, Radio Netherlands Worldwide , Deutsche Welle and the Swiss Broadcasting Corporation where he anchored an English language breakfast show for three years. He is primarily responsible for covering corporate communications on the Eurovision Live Events, including the Eurovision Song Contest, as well as the other activities of the Union's media department.