Reaching out with corporate apps 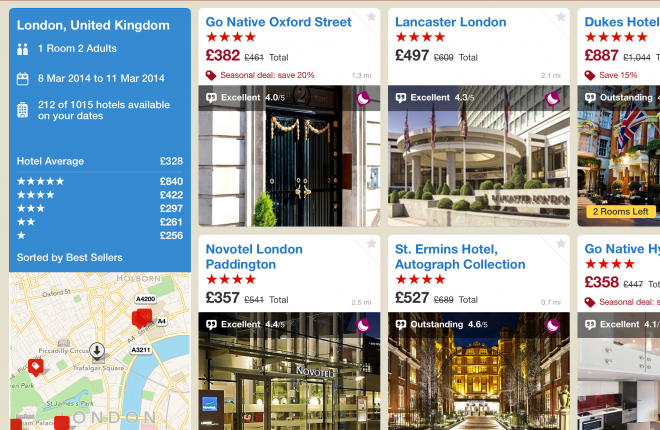 Apps have shaped the way people experience the internet.

They first began appearing in 2008, and by 2010 “app” was named Word of the Year by the American Dialect Society. A May 2012 comScore study reported that, during the previous quarter, more mobile subscribers used apps than browsed the web on their devices. Although observers hold that the market is peaked in 2013, the range and breadth of corporate apps shows no signs of letting up, as three recent award-winning example from diverse industry sectors testify.

Customers looking for an immediate deal on a hotel for the night could do worse than look to their smartphone: the app of hotel booking website Hotels.com offers access to more than 260,000 hotels worldwide in more than 25,000 destinations, and features an abundance of hotel guest reviews and last-minute deals, helping to make the arduous task of finding a room for the night just a finger tap away.

The app has gathered over 33,000 ratings on iTunes and in February this year, Hotels.com released a redesigned version. According to Adam Jay, vice president of global product at Hotels.com, the redesign was for several reasons: “On the technical side,” he says, “we wanted a more universal app across both phone and tablet, and we needed a more extensible design which could support a rapid stream of new features. On the customer side, we saw an opportunity to create a more visually rich experience. We wanted to do a better job supporting ‘deals for tonight’, which make up a large proportion of iPhone bookings, we improved the offline experience and we put maps at the heart of the search. We also wanted to embed our loyalty programme, Welcome Rewards, more comprehensively into the app experience.”

Describing the app as a collaborative, entirely in-house effort by the user experience design team and the brand department, Adam reveals that the process takes around 10 months: two to three in order to develop the “core” user experience design and a further eight in building the app, including, he says, adding enhancements to support the mobile experience more effectively. “There is actually considerable complexity around hotel e-commerce,” he explains, “and the team found a great balance of speed and quality.”

Clearly, it is important to improve the customer experience of an app and, by extension, a brand, but what other purposes can a branded app serve? The Danish Cancer Society could teach corproations a thing or two about succesfull app design. It describes Liv Med Kræft (Life with Cancer) as “the first Danish smartphone app intended to empower and support cancer patients.”

Winner of the Mobile and Apps category in the 2013 Digital Communication Awards, the app bridges the offline and online worlds by connecting cancer patients and their relatives with others going through similar experiences, as well as with doctors and counsellors. Hanne Sandvang, the Society’s head of web and new media, says “our counselling services are brilliant. But how would you find them without a digital presence?” In fact, according to Hanne, the digital contact points for cancer patients and their families outnumbers the amount of offline contacts “by far.”

However, not only does the app serve the needs of cancer patients, it also conveys important messages about the Danish Cancer Society. As Hanne puts it, the app is way of “showing (rather than telling) that it is important to support our cause financially…. in a way, we use all our channels to tell our users that we are not government-funded, which unfortunately a lot of Danes think.

It is an important statement that we need their financial support to keep up the good work.” Another important element of the app, and one that highlights an important issue that many corporate apps must navigate, is privacy: in the app’s cancer forum, users are able to create anonymous profiles including details of their illness. As Hanne explains, “Cancer information is personal and should be possible to delete when you are through the disease, in one way or another. The discussions and blogs in the cancer forum are not indexed by Google in order to protect our users’ information. Of course it is quite a challenge not being visible in Google search, but we regard it as necessary.”

The app is by no means the sum of the Danish Cancer Society’s digital endeavours. In addition to the app, the Society has a presence on, among others, Facebook (the Society’s page is one of the most popular Danish Facebook pages), Twitter, YouTube and Pinterest. Identifying which platforms work best for the Society is another of Hanne’s responsibilities.

“It depends on the purpose of the social media. Facebook is personal, LinkedIn professional, Twitter political, YouTube search and visual, Instagram instant visual, Pinterest aesthetic visual and links. We want a relevant presence on different media, and be where the users are. In my opinion, without a digital presence we would be invisible and fail in our purpose. Most people search the internet first thing after they get a diagnosis.”

A vital ingredient of any corporate app strategy is, of course, content – the words and images that will make people keep hitting that refresh button. Italian energy firm Eni has several apps, ranging from the corporate app to a digital travel notebook, a world energy and economic atlas, a car-sharing app and even a “sandartist” app where users can draw and record their artistic creations – in sand.

According to Viviana Esposti, web press officer at Eni, there is a kind of playful logic behind Eni’s choice of apps. “For Eni, travel is always associated with the car and therefore filling up at our service stations. We also thought it would be useful to offer motorists the possibility of finding good restaurants along the way and this gave rise to the partnership between Eni and the printed guide Fuoricasello for the creation of a dedicated app. Eni’s Sandartist app, meanwhile, is linked to the successful advertising campaign of a few years ago and it is amazing that it continues to be appreciated and downloaded.”

Above all, the variety of the company’s app offerings is a timely reminder that today, companies have to become content producers. Says Viviana, “Big companies with important and recognised brands are increasingly communicating through stories and editorial content, becoming themselves producers of content for new digital channels, such as apps, web sites, video and social networks.”

Finally, some words of advice for those about to embark on a development (or redesign) of a corporate app. According to Viviana Esposti, “it is important, before creating a product, to clearly define what your objectives are in terms of brand awareness, communication and marketing. That is also the only way to counteract the resistance of those who are sceptical about the potential of the new digital tools.” Adam Jay recommends understanding “the real problems you are trying to solve. Then iterate, iterate, iterate. Test, test, test.”