A case of distortion

Readers of corporate reports shoud beware of impression management and the many techniques used to distort corporate messages. 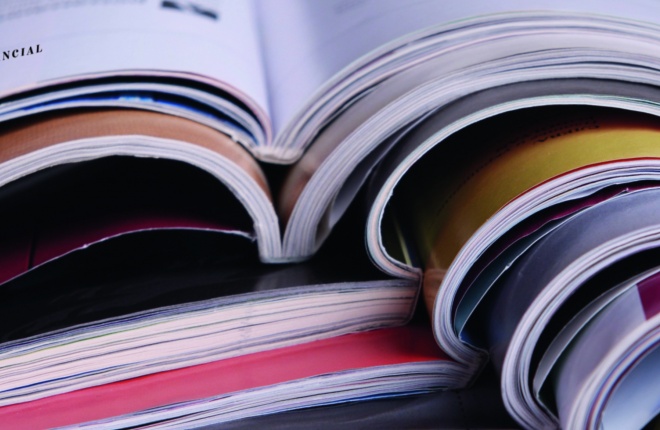 Corporate managers like to portray their companies in the best possible light.

Nothing wrong with that! Many managers tell it like it is. However, research has found systematic impression management in corporate reports.

Impression management in corporate reporting occurs when managers select the information to display and present in a manner that is intended to distort readers’ perceptions of corporate achievements.

Thus, readers need to remove their rose-tinted glasses and exercise scepticism when they read corporate reports. Much of what is included in corporate reports is what managers want to include – not necessarily what investors need to read. There are few regulations concerning narratives outside the audited financial statements. It is a complete free for all, a smorgasbord of choice, for company managers. Beware: if the text is from an annual report, it may not be covered by the auditor’s report whose scope is generally narrowly restricted to the audited financial statements.

Impression management happens in many domains, such as job interviews, politics and marketing. Impression management in corporate reporting is the practice of covertly manipulating material in corporate documents to distort the perceptions of audiences. For example, the language used to describe the company’s financial performance may be expressed in glowing terms, while the underlying numbers in the audited financial statements may tell a different story.

Management discussion of company performance is ripe for distortion. However, companies can use impression management to distort other aspects of their business. For example, companies may want to portray an impression that they are operating in a legitimate manner, abiding by social norms and expectations of society concerning their social practices, environmental issues, and so on.

No article on financial reporting is complete without some reference to the most infamous financial reporting fraud ever. Enron, the seventh largest US corporation, collapsed suddenly in October 2001. Example 1 reproduces extracts from Enron’s Letter to Shareholders published in February 2001 shortly before the collapse. This text (I have underlined some key words) creates the impression of a hugely successful company when we now know the underlying facts were the complete opposite.

Example 1: Letter to shareholders (extract) "Enron’s performance in 2000 was a success by any measure, as we continued to outdistance the competition and solidify our leadership in each of our major businesses…Our results put us in the top tier of the world’s corporations. We plan to leverage all of these competitive advantages to create significant value for our shareholders." (Source: Enron Annual Report 2000)

How one letter can make all the difference

The next example of impression management and distortion is taken from a note in the 2007 audited financial statements of the Irish Nationwide Building Society. Inclusion of the letter ‘s’ created the wholly misleading impression that there were a number of pension schemes for a number of employees, when in fact there was only one pension scheme of €27 million for one person, the chief executive officer, Michael (‘Fingers’) Fingleton. As this text comes from the audited financial statements, one wonders how the auditors allowed such misleading material to get by them.

Example 2: Notes to the financial statements (extract) "The obligations under one of the groups [sic] defined benefit pension schemes, operated by the Group, was settled on 12 January 2007 by transferring outside the control of the Group the assets and obligations of the scheme to another retirement benefit scheme. This represents full and final settlement of the Groups [sic] pension obligations to the members of the scheme." (Source: Irish Nationwide Building Society Annual Report & Accounts, 2007)

There are a number of ways in which the words and numbers in corporate reports can be distorted for the purpose of impression management. In discussing these, I have assumed the financial performance of the company is what is being distorted.

• Readability: Bad news can be distorted by making it hard to read. Research has found good news to be easier to read than bad news.

• Rhetoric: The way in which language is used can create a distorted impression of the underlying truth. The rhetorical device of repetition is common: for example, good news being repeated but not bad news. In September 2014, UK retail giant Tesco plc revealed a £250 million hole in its profits arising from accounting irregularities. But if you read the rhetoric in the chairman’s 2013/14 statement (Example 3) you would get the impression that accounting irregularities are an impossibility. We now know the rhetoric distorted the realities. Was the distortion deliberate? Yes, on the part of the chief executive and chief financial officers who knew of the accounting treatment recognising revenue too early, although the board as a group may not have known.

Example 3: Chairman’s statement (extract) "Our accounts as a whole have been considered by the Board in the light of the new test to be “fair, balanced and understandable.” We have taken seriously the spirit as well as the letter of the new Regulations, which are seeking to build trust between the corporate sector and society generally through levels of transparency and disclosure which are undoubtedly now world-leading." (Source: Tesco PLC Annual Report and Financial Statements 2014)

• Tone: The predominance of positive words and phrases over negative words and phrases. Although corporate documents should be objective and unbiased, they are not. Almost all companies describing their financial performance employ highly biased positive language. The Enron example earlier is a case in point. Do investors filter out this spin as executive hyperbole?

• Visual and structural: There are endless ways in which companies can distort text using visual and structural means: for example, use of headlines (say in press releases), bold text, colour, bullet points, call outs (common in tabloid journalism).

Another Irish financial institution Anglo Irish Bank, used two impression management strategies to emphasise its claim to good governance (see Example 4): (i) a “call out”, together with (ii) repetition of the claim-to-good-governance statement. The call out repeats verbatim text appearing four pages earlier in the annual report. Emphasis in the call out includes larger font size, prominent positioning (which is the purpose of a call out) and the change in font colour.

Not long after this annual report was published, it emerged that personal loans of the chairman/former chief executive officer of the bank had not been disclosed and that a substantial year-end transaction had been entered into for the sole purpose of window dressing the financial statements. Thus, contrary to the impression given in the call out, the Bank’s ethical and governance standards were the lowest, not “the highest”.

Example 4: Corporate responsibility (extract) "We operate to the highest ethical and governance standards as we aspire to be a model corporate citizen. For this reason we invest heavily in the development and training of our staff, as well as maintaining the highest levels of integrity in our relationships with our stakeholders." (Source: Anglo Irish Bank Corporation plc Annual Report & Accounts 2007)

• Comparatives: The use of comparatives can have two effects. First, including a comparative (for example, last year’s equivalent number, or an equivalent industry comparative) can act to reinforce a number thereby making it more prominent for readers. Second, a comparative can be judiciously selected to make the performance look better than it really is. For example, if sales increased by €1 over last year’s sales of €1, reporting a 100 per cent growth in sales without the accompanying sales numbers, conceals that in both years absolute sales are very low.

“Much of what is included in these reports is what managers want to include – not necessarily what investors need to read.”

• Choice of earnings number: An almost infinite range of profit numbers can be given prominence in, say, press releases or in financial highlights in annual reports. Often, the numbers selected for prominence are un-audited numbers – proforma numbers, sometimes called “earnings before the bad stuff”. Shareholders need to know about the “bad stuff”. They should interrogate the audited financial statements and assure themselves of the consistency of the messages in the audited financial statement numbers and the messages in the front end of annual reports.

Choice of earnings number (also referred to as ‘selectivity’) to distort performance is particularly common in graphs and the financial highlights section of annual reports. A further method of impression management commonly found in graphs is measurement distortion and presentational enhancement. Measurement distortion occurs where the physical representation of the numbers on a graph is not proportionate to the underlying numbers. Presentational enhancement occurs when the design of one or more of the graphical components enhances or demotes certain features of the graph.

Kerry Group plc’s financial highlights for 2013 (Example 5) show increasing trends, except for revenue. However, a close look at underlying audited financial statements tells a different story. An easy way of detecting selectivity is to look at what numbers were included in the financial highlights in previous years. Beware of the numbers selected for highlighting changing from year to year.

The Kerry Group plc amounts selected for financial highlighting changed in each year from 2010 to 2014: another common trick. 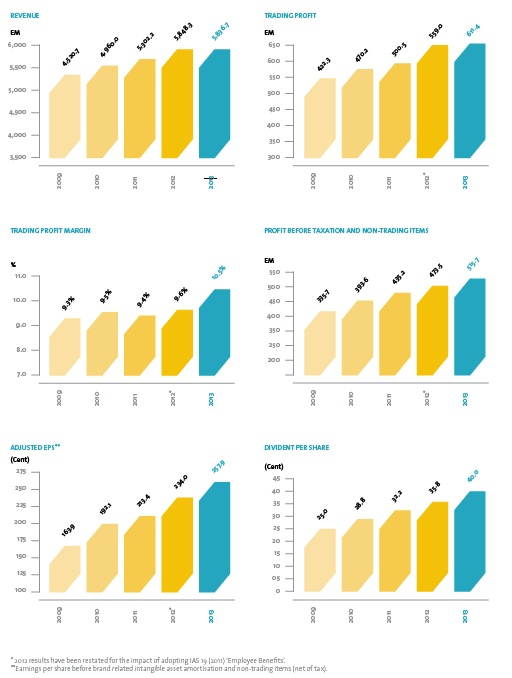 Example 6: "As indicated during our Q1 results presentation on July 29, close in late bookings in July had been at weaker than expected yields due primarily to the heatwave in Northern Europe and weaker sterling/euro exchange rates." (Source: Ryanair plc Ryanair Trading Update, 4 September 2013)

"The 2% fall in fares during H1 was impacted by one off events such as the timing of Easter (not in Q1), the summer heatwave in northern Europe, French ATC strikes in June, and weaker sterling." (Source: Ryanair plc Ryanair reports H1 profits up 1% to €602m, traffic and load factors rise on lower fares, 4 November 2013)

• Pictures: Many corporate documents contain pictures, mainly photographs of the business operations and of the board of directors. These are subtle, powerful devices for creating impressions. I remember one annual report a few years ago with a beautiful picture of an old tree. Was the purpose of that beautiful picture to create the impression the company was environmentally friendly? Impression management often entails decoupling, whereby the impression created (environmentally friendly) is decoupled from how the company actually operates in practice (environmentally toxic).

• Silence: Another aspect of corporate reporting I find fascinating is what companies do not say. Arguably, silence is a more powerful tool than what is disclosed. For example, where I have seen silence used quite effectively is in relation to corporate governance explanations for non-compliance under the company-or-explain provisions of the UK Corporate Governance Code. Many non-compliant companies do not explain non-compliance. Their silence creates the distorted impression they are compliant with the Code. Only readers with a detailed knowledge of the Code will be able to spot this impression management strategy. You have been warned!

Pervasive impression management has resulted in an erosion of the quality of financial reporting. Since the global financial crisis of 2008, there has been increasing emphasis on the need for long-term sustainable business models. Part of what is required is telling it like it is. As professor, philosopher and chair of the UK’s Equality and Human Rights Commission Baroness Onora O’Neill observed in her 2002 BBC Reith Lectures, “Speaking truthfully does not damage trust, it creates a climate for trust.”

• Pervasive impression management has resulted in an erosion of the quality of financial reporting.

• Techniques ranging from rhetoric, images, choice of earnings number, comparative and attribution are frequently used to cloud the true picture.

Professor Niamh Brennan qualified as a chartered accountant with KPMG and is a chartered director with the Institute of Directors, London. Niamh is Michael MacCormac Professor of Management at University College Dublin in Ireland and Academic Director of the UCD Centre for Corporate Governance. She holds and has held a number of non-executive directorships and governance positions in state and private sector organisations. She has published widely on Financial Reporting, Corporate Governance, Forensic Accounting and Clinical Governance.