Creating a culture of purpose

The price of consumer and stakeholder support in an age of radical uncertainty - marked by low trust and high uncertainty – is purpose with proof, transparency and a seat at the table. 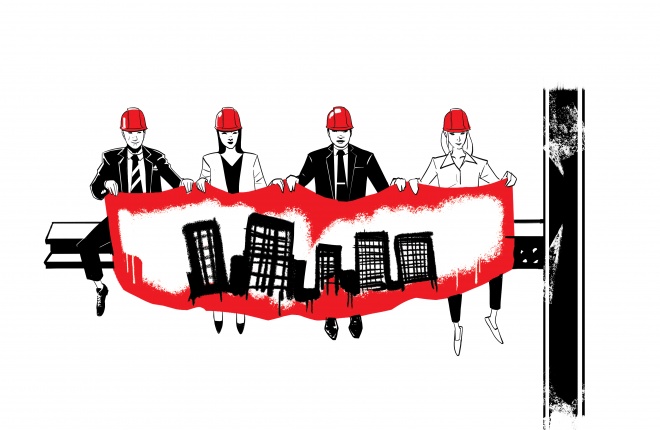 I have a new mantra: “You’re only two clicks away from uncovering a lie.” I learned it from a corporate executive who was describing how his company was dealing with the new communication reality.

His view was that, today, everything is discoverable. There is nowhere to hide your embarrassing or illegal behaviour. It is not so much that the emperor has no clothes, but that we all have X-ray glasses and can see through them. His statement summarised the views of many of the communicators we spoke to in our research about radical uncertainty and the impact it has had on corporate communication. Radical uncertainty has led to the need for radical transparency.

If you can see through them, the emperor might as well not wear any clothes. Or at least be sure that they were made sustainably.

The Brand & Reputation Collective and the European Association of Communication Directors teamed up on a unique research project that took a deep dive look at how senior communication professionals view and are dealing with the concept of radical uncertainty.

How do they define it? How do they think it has affected stakeholder and consumer expectations? And what are they and their companies doing to meet the challenge? This article reviews some of the findings of the research.

“Today, you have to have a strong sense of who you are as a company. Then you can be vulnerable. Everything can change around me, but I won’t change. My character, my values stay the same. Radical uncertainty requires an understanding of who you are, your culture and purpose – and radical transparency.” Hans Koeleman, Chief Corporate Communications and CSR at KPN, and president of the EACD, on how to approach radical uncertainty

The world has changed

According to the communication professionals we spoke to, the world has changed dramatically.  They define “radical uncertainty” as a time of great uncertainty, where trust in established values and institutions is low, and everything we thought we knew about the world has been turned upside down.

Communicators believe that a big driver of radical uncertainty is technological change. It has both empowered and overwhelmed people. People may be able to uncover a lie, but they have difficulty discovering the truth – and worry that technology will put them out of a job.

The communicators we spoke to see more risk, fewer solutions and a dearth of leadership in society that opens the door to populists and others who claim to have the answers to our difficult questions. They believe society has fractured into competing tribes that mostly shout at each other.

As our world has changed, so too have our expectations. Nine in 10 (92 per cent) senior communicators believe that consumer and stakeholder expectations have changed in the past few years. Now, consumers and stakeholders want “purpose with proof” – concrete evidence that organisations are living up to their promises. They expect greater transparency and openness. They want organisations to respond to their issues and concerns almost instantly. And they want a greater role in creating the brands, reputations, products and policies of the companies they interact with.

Adapting to the change

Most communicators (71 per cent) say that radical uncertainty has had an impact on them and their team. For one, they think it’s made it harder for them to get consumers’ and stakeholders’ attention (67 per cent) and support (57 per cent) than before. The constant pressure from social media has led many companies (especially consumer-facing ones) to take a more reactive, crisis approach to communication. The constant barrage of incoming complaints, challenges and questions has made them more tactical than strategic.

“You have to be prepared to not be in control. You have to train your team, put in place early warning systems. You have to be more proactive, open and transparent. People want to get the whole picture.” Miguel Veiga-Pestana, Senior Vice President Global Corporate Affairs and Sustainability for RB on the new communication reality

There is a realisation that everything and everyone in an organisation communicates. Because of this, research participants think that we need new ways of communicating and engaging. When asked what they thought the best ways were to be credible, relevant and compelling in today’s communication environment, participants are most likely to say having clear values that the organisation lives by (64 per cent), followed by content that expresses the organisation’s purpose in a human and relevant way (55 per cent), transparency and openness (31 per cent), deep listening/engagement (27 per cent), and alignment of words and deeds (27 per cent).

Communicators say their organisations are doing a variety of things to build trust and support amongst consumers and stakeholders, especially increased engagement and dialogue (35 per cent), greater alignment (22 per cent), richer storytelling (20 per cent), and having a clear social purpose narrative (18 per cent).

When asked to rate the importance of several activities to building trust and support, half or more say transparency (80 per cent), alignment between words and deeds (68 per cent), relevant content (64 per cent), strong culture (64 per cent), and meeting expectations (57 per cent) are “very important”. 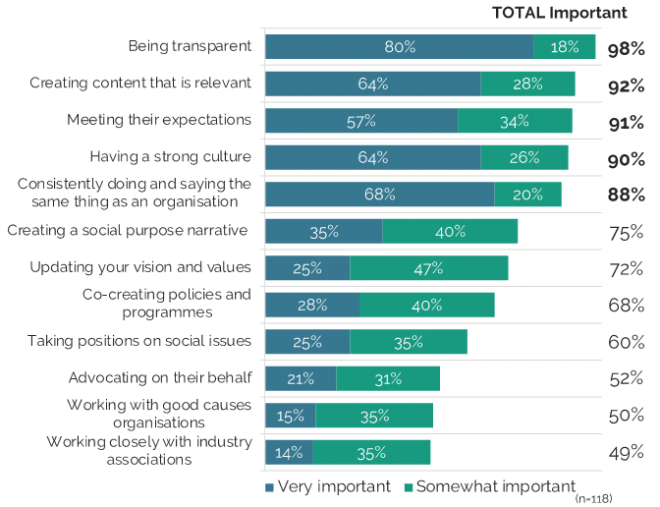 Corporate activism: where do communicators draw the line?

Companies are increasingly asked to take positions on social issues, but they wrestle with where to draw the line on corporate activism. Whether it’s Nike and "taking a knee", Patagonia and taking on the government to save a nature preserve, or Google addressing sexual harassment issues in the workplace, CEOs have to express views on issues that matter to the people that matter to them. It’s not enough to understand your customers’ consumer preferences, you need to visibly share their values about social and political issues as well. 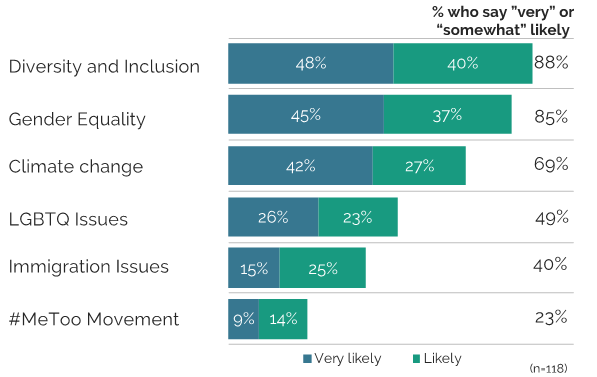 Communicators want their leadership to provide resources – and to lead

If communicators could ask leadership for and receive one thing to help them deal with the new communication challenges that they face, they would be most likely to ask for more budget/resources (38 per cent). Nearly as many say they would like their leaders to lead – by providing a clear strategy, vision, values and purpose (29 per cent).

They would also appreciate leadership’s trust and the freedom to try new things (17 per cent), greater access and involvement with leadership (16 per cent), more team members with new skills (15 per cent), and external advisors on best practice (10 per cent).

Our view: the antidote to radical uncertainty is a culture of purpose

A quick scan of news websites suggests that the levels of political, economic and social uncertainty we are experiencing are unlikely to disappear anytime soon. They may accelerate. It is clear from this study that the changes and accompanying technological advances we are experiencing have created expectations and concerns from consumers and stakeholders that require a new approach to engagement and communication. If everyone and everything communicates, it’s important that they convey the right and a consistent message about the organisation.

We think that the antidote radical uncertainty requires is understood and well defined by communicators. A culture of purpose built on clearly articulated values that makes decision making easier, response times faster and communication consistent. The graph to the left describes our seven elements of a culture of purpose.

"Purpose as marketing rather than authentic outreach – purpose for purpose sake – is not credible. It needs to be linked to the business. In terms of corporate activism, you need to have a strong point of view on where you stand. If not, you get pulled in all kinds of directions.” Torod Neptune, Chief Communications Officer, Lenovo Group, on purpose and corporate activism 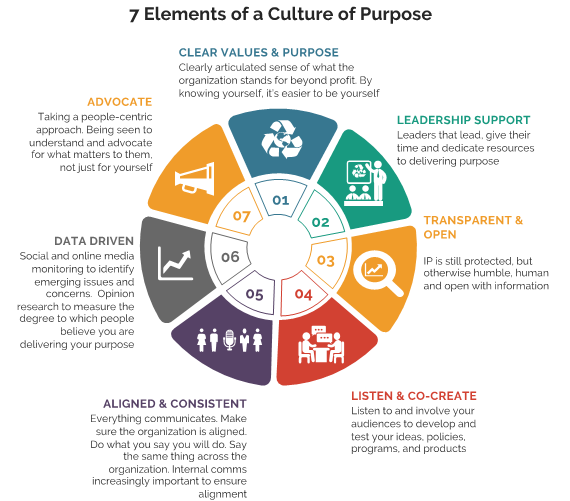 Making the case for a culture of purpose

Most of the communication professionals taking part in this research understand both the challenge and the solution to varying degrees. They recognise the risks radical uncertainty brings to the entire organisation and understand the building blocks of trust and support today.

But can these communicators convince their leadership to dedicate the time and resources needed to create a culture of purpose? It can be difficult to get the executive team’s attention with all the pressing day to day business concerns.

Given that consumer and stakeholder trust and support are critical to organisational success, we think increasingly the answer is communicators don’t have a choice. Somehow, they have to deliver the message and get leadership’s support.

We may end up with a two-track system: Those that create a culture of purpose and those that carry on “business as usual”. Organisations that are clear on what matters to them and who address the issues that matter to their key audiences, are more likely to be trusted and supported. Organisations that continue to take a reactive approach to issues risk expending their energy firefighting and may struggle to connect with the people that matter most to their success. Business as usual is not sustainable.

Communicators want their leaders to lead. They say: let's create a purpose. Let's create a strategy. Let's walk the talk. Give us the freedom to experiment. Give us the budget to tell the story and the resources to execute. But what if leadership lags behind or doesn’t want to hear the message?

Here are five ideas we believe can help to propel you and your organisation forward:

This article was based on a study conducted by the Brand & Reputation Collective in collaboration with the EACD. The study had three phases: 10 in-depth interviews with senior communicators at some of the largest organisations in the world; two round table discussions at the European Communication Summit in Berlin in June 2018; and an online survey of 118 senior in-house communicators across a variety of organisations (corporations, government bodies, NGOs and associations) and sectors in May-August 2018.  The questionnaire for the survey was predominantly open-ended to allow respondents to explore the issue  in depth. For more details on the study and a copy of the full report, please contact Phil Riggins at [email protected] or visit www.bandrcollective.com/blog-1/cultureofpurpose