From boring to bold: Brussels gets EUmotional

Traditionally, political messaging by the European Union has been dry as dust, with populist and anti-EU parties enjoying all the best tunes. However, after the surge of Eurosceptic parties across the continent, there are signs that the European Union is becoming bolder in its communications efforts. 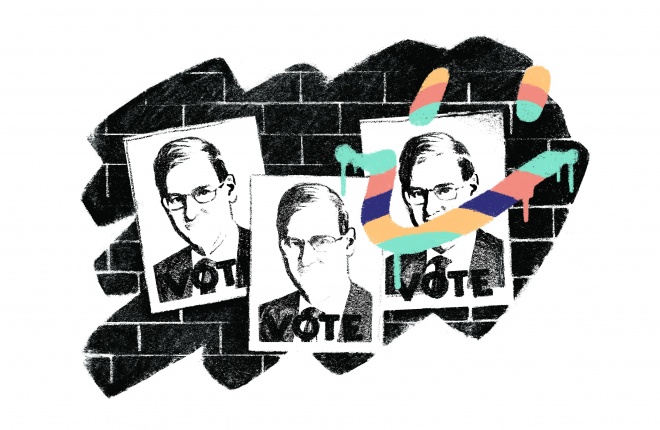 “Today I’m being born,” a girl’s voice says off-screen as we watch harrowing images of heavily pregnant women about to give birth.

“What will the world we grow up in look like? What awaits us?” the child asks, in a questioning, existential style familiar to anyone who has watched too many Terence Malick movies.

As newborn babies emerge from mothers’ wombs, the young narrator says: “some say we are born into this world alone. But we’re not. From the second we’re born into this world, we’re in it together.” Cue pictures of joyous mums, tearful fathers and proud grandparents as the girl urges us to “choose the Europe you want me to grow up in.”

With its edgy editing, stirring soundtrack and raw images of real mums in labour, the European Parliament’s three-minute Choose Your Future film – which was aired in the run-up to May’s EU elections – is an emotional roller-coaster that plays on our hopes and fears about life, love and longing for security.

If the aim of the video was to increase voter turnout, parliament can also feel pretty proud. The May ballot saw the number of voters jump by 8 points to 50,6% - the highest participation for 25 years.

Emotions and the electorate

Communicating the European Union has always been a struggle. The Brussels-based bloc has Byzantine decision making procedures, obscure political parties and largely unrecognisable leaders. It is about compromise – fudged deals offending no one and pleasing no one – whereas the media likes winners and losers.  And communicating to 28 national audiences in 24 official languages is slow, difficult and expensive.

These intrinsic problems have not been helped by the EU’s often amateurish attempts at communicating with the wider public – which until the early 2000s largely consisted of dreary brochures, jargon-stuffed press releases and well-meaning but unwatchable videos.

But after the rejection of the EU constitution by Dutch and French voters in 2005 and the surge of Eurosceptic parties across the continent, the European Commission started to become bolder in its comms efforts.

A 2007 video promoting EU-funded films featured 18 gay and straight couples ripping each other’s clothes off, having sex in toilets and offices and screaming in orgasmic delight. Needless to say, the clip – whose cheesy strapline was ‘Come Together’ - was a smash-hit with the public, becoming the EU’s most-watched film of all time within days.

The success of the EU ‘sex film’ – as British and Polish tabloids dubbed it – sparked a series of quirky and often funny videos aimed at treating heavy subjects in a light-hearted way. Some of these worked – check out Chemical Party, Pan Attack and Hot Summer Holidays. But some - like this blatantly racist enlargement clip and the shockingly sexist Science – It’s a Girl Thing - were quickly pulled.

“It was extremely difficult before to get the benefits of our policies across,” says Pia Ahrenkilde-Hansen, director general of the European Commission’s communication department. “The explosion of social media use made it indispensable to communicate in a different way.”

Faced with growing disillusionment with the European project across the continent and slick, well-funded propaganda from opponents – whether the Russian government or eurosceptic groups – the EU upped its communication game. It learned from the failure of the Remain camp in the Brexit referendum in 2016 that bombarding people with facts was no match for leave campaigners making emotional pitches to ‘take back control.’ It realised that boasting about material benefits such as the removal of roaming charges only resonated with a globetrotting elite. And it finally sussed that positive messages trump doomsday ones.

The European Union, whose communication had been so bloodless in the past, suddenly got all emotional. It started telling real stories with real people. It made those stories relevant to people’s concerns. And it took the priceless advice of Chip and Dan Heath in ‘Made to Stick’ to heart: “A credible idea makes people believe. An emotional idea makes people care.”

"(The EU) started telling real stories with real people. It made those stories relevant to people’s concerns."

Ahrenkilde Hansen admits that the role of emotional communication was overlooked in the past, contributing to a gap between the EU institutions and the people it represents. “There is a lot of scientific evidence that emotion gets more attention than reason,” the former chief spokeswoman of the Commission said in an interview. “We won’t stop using data and rational narratives otherwise you end up in a manipulative universe. But we want to engage people and show our policies are relevant to them. So emotions are an essential part of our communication. They connect more positively with our audience.”

Typical of this new approach is the current #EUandME campaign. “What matters most to you?” the site asks young people. “From beachcombing to backpacking, surfing the internet to saving the world, living in the European Union provides endless opportunities to do what you love – wherever that may lead.” The site has a section on ‘Your passion and the EU’ full of practical advice on running a business, finding a job or fighting climate change. It is well-designed, with plenty of pictures of happy hipsters and personal stories about “intrepid explorers, scholarly students and eco-warriors from across Europe.” And it is written in the sort of clear, simple, engaging language that is not normally the Commission’s forte.

Another section of the site features seven beautifully shot films by European directors, loosely linked to the theme of ‘what the EU does for you.’ In Debut, by Dalibor Matanić, a young Croatian farmer dreams of becoming a football star. But first he must come to terms with his own sexuality. Watch it and try to hold back the tears.

The EU has also taken a leaf out of the populists’ playbook by focusing on its efforts to protect citizens from crime, terrorism and the flipsides of globalisation. A campaign called EU Protects has a deeply moving film about ‘two mothers who faced extremism but kept fighting for their sons.’ It features testimonies from a mum whose son was killed in the Manchester terrorist attack in 2018 and another whose son was arrested attempting to join a jihadist group in Syria. At the end of the short video, the two women hug and one says: “We’re both mothers. And we both have sons.” Then the message: ‘Every day in the EU ordinary heroes work together to protect us.’ Simple language, personal story, emotional tug: three key ingredients of powerful, sticky messaging.

“We tell more stories,” says Ahrenkilde-Hansen. “Instead of saying ‘our policy is this,’ we tell how it will impact you. And we have started using ordinary people to tell the story of Europe and what it is for.”

Get to the point

Telling stories is fine, but only if people understand them. One of the cardinal sins of EU communication since the bloc’s birth has been its over-reliance on unintelligible jargon like ‘comitology’ and ‘subsidiarity’. You can still find plenty of meaningless gobbledygook in EU speeches, tweets and press releases. But on social media and their increasingly attractive and user-friendly websites, the EU institutions are using clearer, more direct and emotional language than in the past.

‘Plastic waste is choking our oceans, killing wildlife and threatening our own health,’ warns a recent tweet from the Commission, extolling its new strategy to curb plastic pollution. And who can forget European Council President Donald Tusk’s remarks in February 2019 that a "special place in hell" would be reserved for "those who promoted Brexit without even a sketch of a plan of how to carry it out safely"?

There is no guarantee that this more personal, political communication will win the hearts and minds of Europeans. But you can’t blame the EU institutions for trying.

Gareth Harding is the managing director of Clear Europe, a media and communication training company based in Brussels. He has written for Time, Politico, The New York Times, Wall Street Journal and the Guardian and EUobserver, and is director of the Missouri School of Journalism’s Brussels programme.