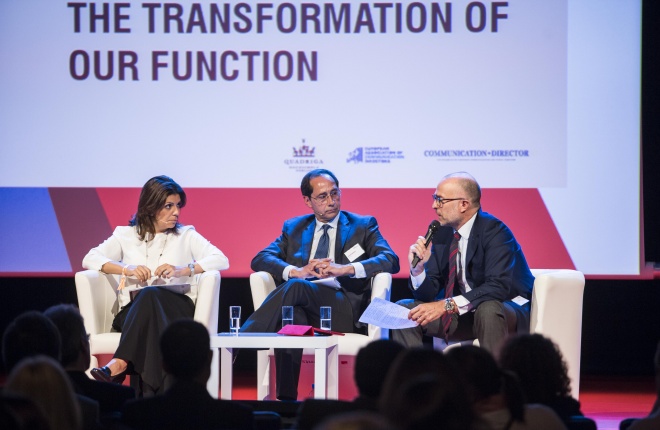 Today, corporate communications is a multidirectional conversation across a huge variety of channels and an even larger set of engaged stakeholders. Meanwhile, communicators are increasingly becoming a trusted counsel to CEOs across a range of responsibilities.

Here, two of the leading minds in talent advisory share how they define the leadership characteristics of the new breed of best-in-class chief communications and corporate affairs officers.

RICHARD MARHSALL Historically people that have come into communication have either come from journalism, or perhaps from politics, and they may have had a narrower pathway in. But with the role expanding and expectations of the C-Suite increasing, the experience set needs to be broader as well. From a training and development standpoint it’s hard to be prescriptive around that. We’ve done a study among the “uber professionals” and it’s interesting because not all of them are the same, they don’t have the same training or background. What really distinguishes them is the combination of their experiences. Most of them have been in politics or journalism and have multi-industry experience, and they’ve gained a rich tapestry of experience that has given them this other critical piece, business judgement, and a point of view that’s helpful to the organisation. For people that have come through the traditional corporate communications or public relations side, the focus has always been the “craft of PR,” writing great press releases or “getting ink,” which is an important part of the role but it’s a very narrow part of it. Looking forward, the role is evolving into one that requires greater strategic capabilities, and a broader set of leadership and advisory skills.

GIZEM WEGGEMANS One is the rise of social media and access to information, which suddenly lifted all the walls. Senior leaders were engaging in discrete conversations, yet the discussion has actually become one as opposed to a number of different conversations. In today’s world, what someone says on Twitter one second is reported by a journalist in a completely different geography which gets read by a consumer in yet another geography who then complains about it so it becomes a regulatory issue in a fourth geography. You no longer can afford to treat any of these conversations as separate conversations. Stakeholders are a lot more connected, the consumer of information is a lot more sophisticated, and reputation suddenly accounts for a lot more of your market cap. Suddenly a function in which you didn’t really invest before becomes something a lot bigger because the world in which the companies are operating is a lot more complex, a lot more connected. You needed a different kind of investment in this space to ensure that your voice, your purpose is devised and communicated by the best talent possible.

So demands on the function have grown exponentially, but some believe resources have not consistently. If we want to invest in the development of the communications function, how do we do it?

GIZEM WEGGEMANS Different organisations have thought about resourcing the function differently. One of the important things that a great corporate affairs person can and should do is to continue to educate the organisation so that the organisation can be self-sustaining and think about their own stakeholder management. Do I think that we need more investment in this space? Absolutely I do. But at the same time, I’m not sure that I am necessarily a huge fan of empire-building. When people talk about dedicating the right resources to the role, a lot of the times what they mean is building a massive team around someone. There are many different ways in which one can deliver value in this function before we need to create a 500-person communications team.

RICHARD MARHSALL The challenge is that, in the business environment we’re in now, there has not been any exponential increase in resources, so naturally there’s a struggle for resources inside the organisation. In some cases as the mandate of the chief communications officer expands, to include things such as stakeholder monitoring, digital/social media, or reputation management, the resources need to come from marketing or perhaps from a business unit, or might have to get a special approval from the CEO. So, as the expectations of the function are increasing the reality is there are legacy issues such as staffing and budgets that are still lagging behind.

And the winner of that struggle is going to be the one with the strategic overview?

RICHARD MARHSALL I believe it will be the one that has the greatest influence within the C-Suite. In some cases that may be marketing, because they’re better positioned or viewed as being more strategic or business oriented. In other cases it may be the communications leader. But it’s really dependent upon the incumbent in the role, it’s also dependent upon the CEO or the power structure within the organisation in terms of where resources go. Historically marketing has had the resources and they’ve been better positioned to make their cases for why they need resources. But if you step back and think about it, in many ways marketing is only working a small set of audiences. The communications officer, on the other hand, is looking at the whole variety of stakeholders. In terms of the future, it depends upon who has the best relationship with the C-Suite.

GIZEM WEGGEMANS Marketers have that business acumen because the talent in that space have been investing in themselves and have been exposing themselves to the commercial side of the business as a whole. This is not about one function trumping the other, and that’s the thing we need to get our head around. It’s time for corporate affairs professionals to step up and say “I’m a business executive”. There will be some organisations where they’re so brand-led that of course you’re going to have a chief marketing officer at the executive table. But the chief marketing officer is changing as well, as they become more and more chief customer officer-type individuals who are driven more by insight analytics, data and so on. There will be part of the communication mandate, the engagement mandate that the corporate affairs will need to step into. But unless you have a corporate affairs person who has actually developed themselves as a business executive and who has not defined themselves as the one who deals with the media and press releases only, that person will not be a credible replacement or a peer to hold an executive seat. 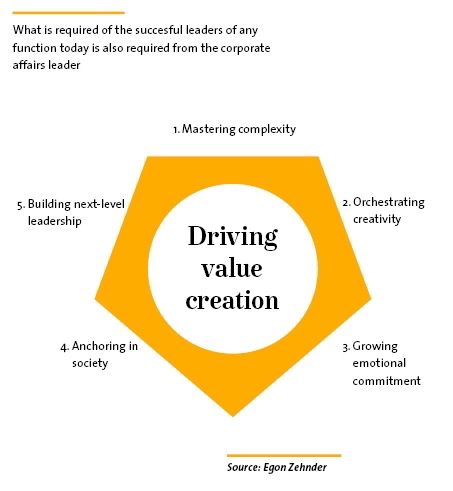 RICHARD MARHSALL CEOs essentially want somebody who knows how all the pieces fit together. In some organisations they may be most comfortable turning to the CMO; in others it may be the CCO. The CEO doesn’t necessarily care about the organisation chart. They mostly want a problem solver and trusted advisor they can turn to and, with the number of direct reports to the CEO shrinking, he/she may make the decision based upon who they believe has the best overall business understanding.

"CEOs mostly want a problem solver and trusted advisor they can turn to."

And it becomes clear then that only someone that sits at the highest strategic level can pull that off?

RICHARD MARHSALL The person that is best positioned is the one who has the best insights into where the business is going, what the CEO’s game plan is, and has the best relationships and influence internally to drive alignment and action. Among others in the C-Suite, often times the CCO has a 360 degree perspective among all stakeholders (government, business partners, employees, media, regulators, NGOs, and a variety of others), and they are in a unique and highly valuable position. There’s really nobody else in the C-Suite that has that vantage point/perspective.

Gizem, is the kind of rotational development programme you mentioned earlier always possible for communication leaders?

GIZEM WEGGEMANS It’s a chicken and egg situation. Part of it is the organisations integrating the function at a chief communications officer-minus one level. Part of that is organisational design, organising the integrated function within the business lines, around regions et cetera. But the other part of it is the talent themselves investing in their own development and ensuring that when they’re asked to take on that role they’re equipped to do it. Both Richard and I were asked these questions and we were very honest about it, frankly there’s just not enough depth of senior talent in this space. Even if we created the demand on the client side, we’re not going to be able to find as many fully-equipped global integrated communications leaders that can fill those seats at an executive level. What I would love to see happen is the corporate communications executive investing in their own leadership development as business leaders while we continue to work with organisations in elevating the profile of the function.