Brand transformation in a disruptive age: how the financial crisis forced ING to rethink its brand 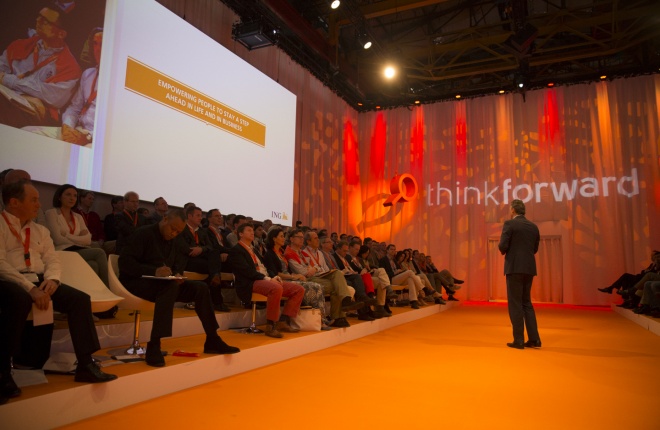 And though you might think that this is a period of rapid change, the truth is that the pace of change will never be slower than it is today. Remember when 'twitter' was a sound made by birds?  Although you might remember, your children probably don’t.

Just before the financial crisis hit, ING had just became a sponsor of the Renault F1 team, and entered the Interbrand ranking of ‘most valuable global brands’. At its peak in 2007, ING employed over 130,000 employees in 60 countries, had six business lines with activities ranging from retail, private and commercial banking, direct banking, real estate, credit cards, car leasing, pensions and insurance products.

But when the crisis hit, ING found itself at its epicentre. The global recession was hard on ING, which had become too complex. In 2008 the company took a bailout of 10 billion euros from the Dutch government and in 2009 a rigorous restructuring programme began. The effect of the restructuring left the company stronger, simpler and more sustainable. The impact of all these changes on the brand value was dramatic: according to Interbrand, in 2009 ING’s value dropped by 73 per cent compared to an average of 39.5 per cent. The restructuring also took its toll on employee engagement.

Nanne will be sharing more about brand in his Insight session 'Organising for brand love: moving towards a global integrated collaborative brand experience and communications system' at the 2019 European Communication Sumit - tickets availabe now

Like other stakeholders, employees also started to raise questions about ING’s identity. Is ING the same company as before the crisis? What is the role of ING in society? How can ING regain trust? In the context of these turbulent times, questions surrounding ING’s identity quickly became very relevant. When employee and customer engagement is at stake, so is business performance. When Ralph Hamers succeeded Jan Hommen as chief executive officer in 2013, the time had come to think about the future of the organisation. But where to start in a world that is changing so rapidly? 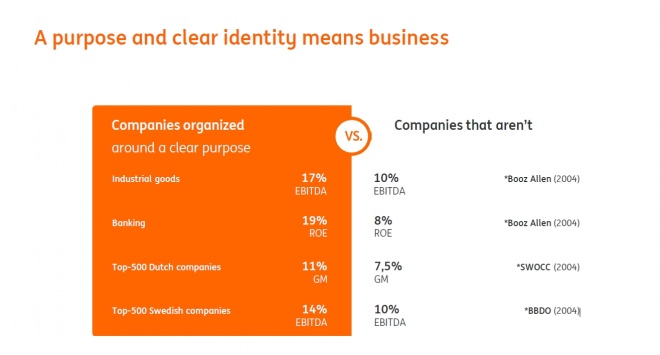 Jeff Bezos, the founder of Amazon, once said that one should look for the things that do not change. “When you have something that you know is true, even over the long term, you can afford to put a lot of energy into it,” he said.

The same is true for brand and reputation professionals. The massive changes around us force us to go back to the core idea of our profession – managing the identity of the organisations we work for.

A relevant and differentiating identity is the condition for a strong reputation. It creates competitive advantage, contributes to profitability and is a success factor for change. A clear identity has the power to engage all stakeholders, including customers and employees and align all functions of the organisation: strategy, human relations, operations and marketing. The brand in this context becomes a point of reference that connects, engages and brings meaning.

"A relevant and differentiating identity is the condition for a strong reputation."

For ING, capturing its organisational identity and purpose was a bottom-up process in that it involved over 15,000 employees and 10,000 customers across 40 markets. After many discussions on all levels within the company – including the executive board – the purpose of ING was defined as “empowering people to stay a step ahead in life and business”. The purpose then became central to its Think Forward strategy. 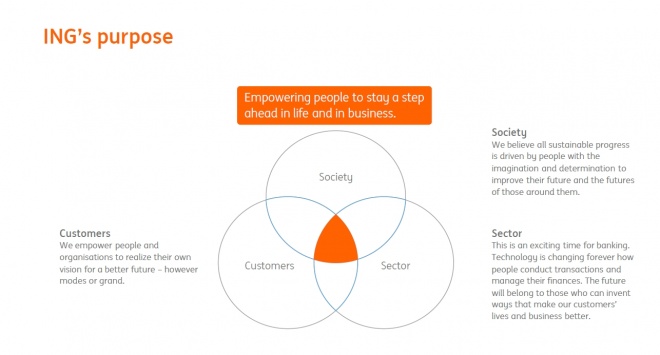 On March 18 2014, the top 200 managers of ING came together in Amsterdam for the kick-off of the new strategic direction. During the event the newly-defined purpose played a central role.

As Ralph Hamers said during his keynote speech:“We wanted to go into this company and have a true discussion on what  we stand for. And we did that: we discussed with all your people in all the business lines so that we could all align behind one statement: empowering people to stay a step ahead in life and in business. Now, I know that some of you might be thinking ‘come on Ralph, stop with the fluffy stuff. What is the point?’ And I’ll tell you: the purpose is the point.”

What followed was a CEO roadshow in each market to spread the strategy throughout the organisation. Moreover, we started to work with corporate HR and sustainability to design a companywide behaviour programme aligned with the purpose to replace all kinds of local initiatives. In parallel, we reassessed the brand design and set up a brand vitalisation programme to make the company design digital proof and bring more coherence between business units. Crucial to the success of these programmes was finding a balance between central direction and local ownership in combination with the strong co-operation between the functional lines; HR, communications, sustainability and strategy.

After one and a half year of progress we could clearly see the benefits of this approach. ING’s brand value has gone up to pre-crisis levels and it currently ranks at 26 in the Brand Finance Global Banking 500. The majority of the employees understand why the purpose is important. 79 per cent of employees worldwide believe in the purpose; and 81 per cent of employees say that the purpose will help ING to reach its goals. Externally, ING is beginning to be recognised for its purpose. In many markets it differentiates on the main drivers, and analysis shows a clear correlation between the purpose and brand preference and consideration. 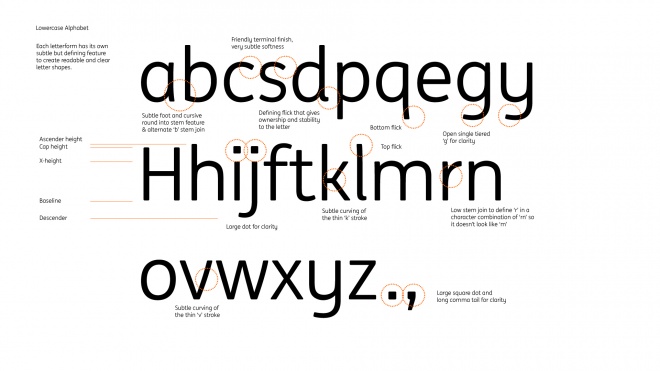 Examples of the typeface used in the ING Me brand