“Cultural heritage is the cement that binds the people of the EU together.”

Androulla Vassiliou on defining a common European culture, and why the European Union needs to communicate to survive. 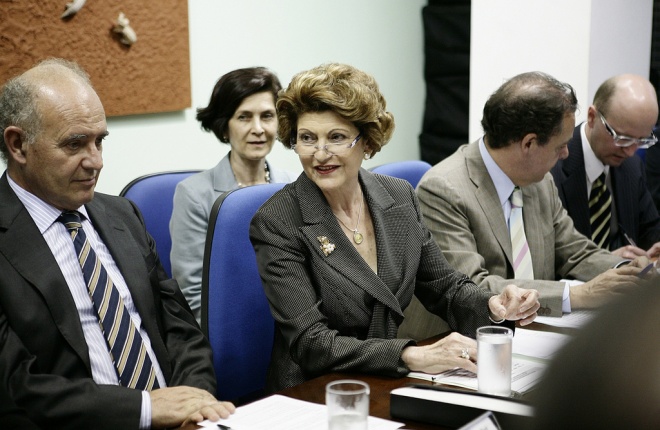 In a Europe confronted with populism, nationalism and Euroscepticism, what role does culture and communications play?

In this interview, taken by Stavros Papagianneas as part of a series of interviews with key stakeholders in European communications for his book Rebranding Europe. Fundamentals for Leadership Communications, Androulla Vassiliou, former EU Commissioner for Education, Culture Multilingualism and Youth, shares her perspective on a common European culture.

Stavros Papagianneas: What are the main communication challenges in Europe today?

Androulla Vassiliou: The main challenge for Europe nowadays is how to combat populism, nationalism and Euroscepticism. All these populist parties, nationalists and Eurosceptic groups in the different member states have one common enemy, which is the European Union. So all of us that are for the EU have to join forces in order to address this challenge. The point is, when you want to communicate something you must be very careful about the content of the communication. What do you communicate? How do you communicate, by whom and when? These elements are very important. To be perfect in your communication you have to watch this. And we have to avoid EU jargon. We have to speak to people in a language which is understood by them.

"We have to avoid EU jargon."

Unfortunately we always make the mistake of using technical language which is not well understood by citizens. Therefore, instead of really making people understand Europe and bringing them closer to the European Union, we are alienating people.

Communication is not included in the political priorities of the European Commission. Do you think that communication should be a strategic priority for the EU now more than ever?

Communication is a horizontal activity. It does not mean that because it is not included as a political priority that it is not a priority for Europe. Whatever are the priorities of the European Union, communication of those priorities is important. And do not misunderstand what I will say because I am a Greek Cypriot, but choosing Margaritis Schinas as chief spokesperson of the European Commission is part of the prioritisation because he is a political choice. Schinas knows Europe well. He has lived through the different stages and under different offices, so he knows what the priorities are and I think he has the capacity with his team to make communication more effective.

Communication is more about listening than about speaking. Are the EU Institutions listening to their citizens sufficiently?

We have a number of institutions that communicate. There is the European Parliament, because they are the elected representatives of the people and therefore they communicate what happens in the European Parliament to their voters. We have the  Committee of the Regions and the Economic and Social Committee, who are all representatives of citizens. On top of that, we have the representations in the Member States and their task is to communicate the priorities and problems to the citizens and to listen to the people. Now moreover it is very important that we create good relations, and I think that many commissioners do so because of their portfolio and relations with European and national NGOs.

For example in my case, I had a tremendous variety of NGOs in education, culture and youth. In my previous portfolio I also had a lot of NGOs which dealt with health, animal health fare, sanitary GMOs or the enemies of GMOs. You have to really exploit the NGOs in order to communicate your priorities. So it is not a question of having the right means. We have the right means but we have to communicate it well.

About 10 years ago, the European Commission launched Plan D for better communication with citizens and creating a European public sphere. Does Europe needs a new Plan D as was the case during the first Barroso Commission?

At the same time we initiated the Citizen’s Dialogues. Every commissioner of Barroso II had to conduct two or three dialogues with citizens. I will never forget my first citizen dialogue was after the ‘bail-in’ in Cyprus. Can you imagine how hostile the audience was? Still, I found it very effective because to listen to the complaints of participants was very useful. They felt aggravated and they needed a way to express their dissatisfaction.

"Can you imagine how hostile the audience was?"

So you are absolutely right that you have to listen to citizens and of course we have the Eurobarometer. If you pay attention to the Eurobarometer of how they go up and down, you’ll have a sense of what is happening on the citizen-level.

What you are saying is that Barroso II introduced a new narrative dialogue initially for a select group. Do you think we must enlarge to all groups of society?

Exactly. The dialogue with citizens has to continue and it has to be organised at different levels. The European Youth Forum is part of this new narrative. I was actively involved in this new narrative and we involved the European Youth Forum because we it is important that we appeal to the youth. We have to listen to the youth. I remember in the panels, we had philosophers, writers, film makers, and so on, but also young people. The youth spoke out. They are the best messengers of what the feelings of the citizens are.

Less that 0.5 per cent of the EU annual budget is spent on communicating the most complex collective democracy in the world. Do you believe this budget is enough?

Certainly it is not enough, but I think it is utopian to even think that the Council or even the citizens would agree to transfer funds from policy to communication. So I think it is not a question of quantity but quality.

Erasmus is one of the European Union’s most successful programmes. Can it contribute in a fruitful way to the creation of a European public sphere and a European identity?

In 2012, we started negotiating the budget for 2014- 2020 and our new programmes. At that time we faced a big economic crisis. Nobody imagined that education would get an increased budget under such circumstances. Nevertheless, I passed on the message to everybody that Erasmus is a unique programme. It creates real Europeans. Honestly, I have not come across a person who has been an Erasmus beneficiary and is not a pro-European. I see it with heads of state. Renzi is an Erasmus beneficiary, and so is the prime minister of Luxembourg, Xavier Bettel and Commissioner Cecilia Malmström, So these programmes make you feel really European.

"I have not come across a person who has been an Erasmus beneficiary and is not a pro-European. I see it with heads of state."

Young people are sent abroad, they get to know new people, new cultures, they meet peers from all over Europe, and they a real sense of communication, of cooperation of understanding, which are the real values of Europe. At the same time, even with the 47 per cent increase we cover only 5 per cent of Europe’s young people. But if there was a way that we overcome the crisis and we have an increased budget, I think we should put more money into that programme. We should give the opportunity of cooperation and exchange to many more people.

Do you believe that a common European culture can reinforce the creation of a European public sphere? How and by which actions can the EU contribute to this?

I am a great believer in the power of culture. I consider culture and cultural heritage as the link between our past and the future. Cultural heritage is the cement that binds the people of the EU together and it is very important that through culture we establish and create a common European sphere. One of my initiatives as commissioner of culture was the creation of the European Heritage Label. This is very different from other labels because the label is given to sites that are directly related to Europe’s history and integration. It is not about beautiful or important archeological sites, it is about places that are important to the history of Europe.

Between March 2008 and February 2010, Androulla Vassiliou was the European Commissioner for Health and then, until November 2014, the European Commissioner for Education, Culture, Multilingualism and Youth under the Second Barroso Commission. In Cyprus her political career dates back to 1996, when she was elected to the House of Representatives of Cyprus for the Movement of United Democrats, and re-elected in 2001 until 2006. During this time she served on the European Affairs Committee and the Joint Parliamentary Committee of Cyprus and the EU. She was also an alternate representative of the Cyprus to the European Convention which drew up the European Constitution. Between 2001 and 2006 she was vice president of the European Liberal Democrat and Reform Party, and the chairperson of the European Liberal Women's Network. Since 2002 she has been chairperson of the board of trustees of the Cyprus Oncology Centre and she has also been president of the Cyprus Federation of Business and Professional Women since 1996. She was involved in the United Nations Association of Cyprus, being elected as president of it for four consecutive terms. In 1991 she was elected president of the World Federation of United Nations Associations and re-elected for two terms before being made an honourary president.