In an era of no management, promoting the employee as reputation manager gains even more importance, as this case study from one of Europe’s leading telecommunication firms proves. 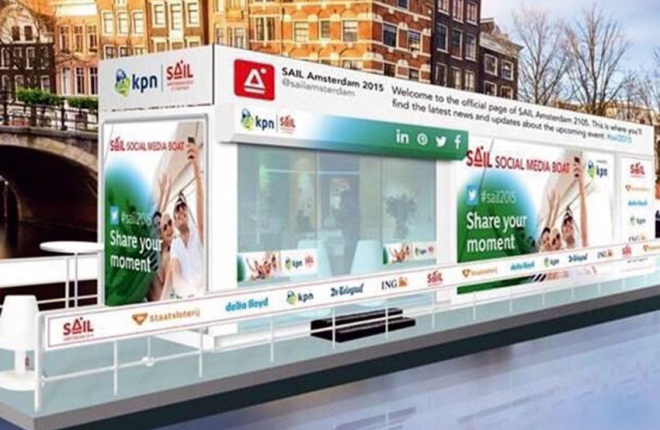 We are gradually moving into an era of ‘no management’. At least, I sincerely hope so. Because I believe that many employees are capable, willing and enthusiastic as long as they are able to organise work themselves.

Managing the reputation of companies is not done by official reputation managers, whatever that may be. It’s done by our people every day and it’s done by empowering them to communicate freely, actively, and responsibly.

I am reminded of the time I changed the way our visitors were treated in the entrance hall of our head office by giving the broadest possible mandate to the hostesses. Nowadays I often get compliments from visitors about the professional and friendly manner they are treated with when entering our premises. It’s simple: the hostesses represent KPN to the fullest and they feel responsible because they are given the authority to treat our visitors in the best possible way. No rules, just the simple request: please treat our guests as you would like to be treated yourself. Surprise and overwhelm them with our hospitality.

Another example is the freedom our service employees have to serve customers to the best of their ability. It is not about the targets for the amount of customer calls they handle. What’s much more important is the way they really help the customers by solving their problems. Empowering employees means giving them less systems and KPIs. These are obstacles that stand in the way of really solving the issue. The fewer barricades there are, the more responsibility employees feel for tackling issues effectively. In this digitalised world customers are increasingly capable of handling most issues themselves. They only need a service employee on the phone or in the house when it’s absolutely necessary.

In February this year, KPN received an award for its reputation in the Netherlands. This award has a lot to do with the way we communicate internally and use our corporate social media communications. We began formulating clear reputation goals in 2010, part of the Long Term Incentive bonus scheme for the top management at KPN. This motivated the board to improve the company’s reputation and, after all these years, we have achieved it, with the second best reputation in the European telecom sector after Swisscom.

Begin from the inside

One of our key beliefs in reputation management is to communicate transparently, openly and honestly. This is of foremost importance for all the propositions we create towards customers. No hidden details in the small print of your contract that nobody told you about when you signed; instead, total clarity about the services we provide and the amount you pay for it.

If you are willing to generate transparency and honesty towards customers you have to start from the inside. That’s the fundament on which your organisation is built. You have to empower your employees and make them ambassadors of your company. Give them confidence. Therefore we need to build a very open communication environment for our company in which employees are totally free to communicate whenever they want and wherever they are.

“You have to empower your employees and make them ambassadors of your company.”

We have called this environment TEAM KPN, which reflects our effort to work and perform as a team in our company. In addition, TEAM KPN is the name of our internal social media platform. A recent study from Evolve (a Dutch company specialising in building internal communication platforms) showed that TEAM KPN is Europe’s best internal platform. In 2015 TEAM KPN also a received an Intranet Award in Berlin. In other words, we received great external recognition for the platform, which is nice of course.

But more important is the way our employees recognise the platform and the way they participate. Just to give you an impression: in 2015 13,772 employees generated two million views, 4735 blogs, 35,129 responses and 118,679 likes. Almost 100 per cent of our employees are active on the platform. Even staff in our stores, call centres and out in the field are connected. By creating so much communicational traffic we have not only boosted the possibility for dialogue in the company but also the pride of our people.

It is highly instructive to see the positive impact of an open internal platform. The main responsibilities of our corporate communications are to produce and publish corporate articles, to oversee the development of the platform and to monitor the daily information flow. Most of the content is produced by non-corporate communications staff, particularly by senior management. And we can see how active and effective senior managers are in conveying messages to their staff.

Even amongst our board members we can hold a beauty contest, and of course our CEO is the most active and most effective blogger of the company. But you don’t have to be the CEO of KPN to be a popular blogger and have many followers. The most famous bloggers are regular employees that dare to blog about their daily work and their experiences with customers.

Also very important is directness and honesty in communication. In 2015 the supervisory board of the company decided to give an extra bonus of €425,000 to our chief executive officer, Eelco Blok, as a reward for the successful divestment of the German subsidiary. Unions, shareholders and other stakeholders responded critically to that decision. On the TEAM KPN platform employees also questioned the decision. When Eelco decided to give back his extra bonus and end the discussion, he wrote a personal blog. It was so powerful, we decided to use it as an external message. This is a perfect example of how you can (or should) communicate in the modern age where social media forces us to be absolutely transparent about almost everything. 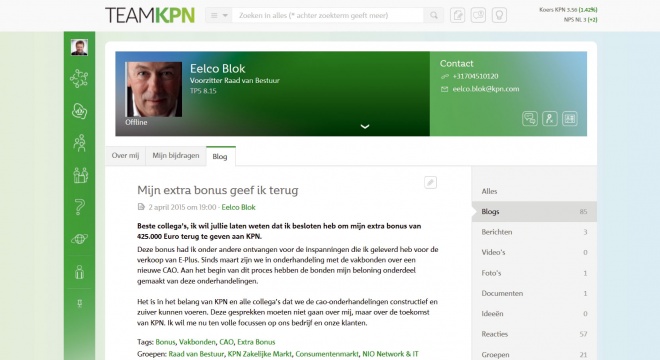 When KPN’s chief executive officer decided to hand back a controversial bonus, he wrote a blog post about it that was used in internal communications.

Dare to speak up

On TEAM KPN, anyone can start a group on anything. We have active communities around many different topics and recently we started to create closed environments for people who not only want to communicate but also collaborate on confidential stuff and share documents, project plans and so on. This is gradually growing: we do not force any of these developments. We simply make sure there are regular iterations of the platform – discussed with HR and IT – that are useful and have a clear purpose to improve our ways of communication and collaboration. We organise many workshops to make sure that people are capable of using the available tools, such as wikis, talent finders and so on.

Another positive aspect of our internal social media platform is that the best-read posts come from the corporate communications department: it’s mostly stuff that employees like to read and know about. An effective contribution is the short video Every Customer Matters, featuring customers who talk about their less-positive experiences with the company and the way we solved their problems. This also helps to open up the company. An internal survey in 2014 showed almost 70 per cent of employees feel confident in speaking up in the company. TEAM KPN aims to further improve this score. Recognition is organised for example by a yearly KPN Team of the Year contest, where the best team is selected by a jury and the employees themselves.

Speaking up is also the theme of our annual strategy television programme, in which the board and employees participate in an open and live environment. The format is an updated execution of KPN’s strategy combined with a quiz. Employees have to answer multiple-choice questions about the company and its strategy. To stimulate discussions, each employee is able to post topics or questions via social media or the TEAM KPN app on smartphone or tablet. The format of the programme is a success because employees get a clear picture of the state of the company and the way the board executes the strategy. Five thousand people watched the last live coverage and five thousand people watched the video programme afterwards. The programme also had a positive impact on the net promoter score of the strategy update, which reached +17: a new record for KPN.

The internal strategy programme is also externally communicated, resulting in a trending topic score on the day itself. Maybe that is the most important aspect of modern internal communications: much of this information is at the same time external. More than 30,000 followers of our KPN Twitter account follow us because they want to read about interesting developments in the new technologies of our company. Once the information is posted on TEAM KPN, the colleagues share it via social media platforms like Facebook, LinkedIn or Twitter. Logically they like to share updates about the parts of the company they work for and of which they are most proud.

When the world-famous Rijksmuseum in Amsterdam held an astonishing exhibition of Rembrandt’s late works in 2015, KPN welcomed as many visitors to the special online environment as there were visitors in the museum: over 500,000. People were able to watch guided tours with experts and Dutch celebrities, gaining new perspectives on the exhibition. When SAIL Amsterdam, with its beautiful tall ships, was organised in 2015, we managed to create the most effective social media event of the year, because of our fixed mobile infrastructure and our KPN social media boat, which attracted celebrities. Both of these projects were supported by content generated by our own internal community.

Recently, we published our annual report in which we integrated 100 videos of Dutch people who are somehow connected with KPN. We also used many infographics to convey the corporate reporting information with the least amount of words and pages possible for an integrated GRI-4 comprehensive report. As soon as our report was published, employees enthusiastically shared the content. Maybe only a minority of them will read the annual report but by watching the videos and being inspired by the infographics they get a flavour of what we are doing.

New leadership and new communication start with open and honest communication. The time of leadership playing hide and seek is history. If you expect employees to take responsibility for their actions, you have to be there as a manager and communicate yourself in an open manner. Codes of conduct are nonsense (although we have one too): it’s in the everyday communications where we make the difference. Be open, as a CEO, as a corporate communications department and as a member of the senior management, and facilitate your employees in every way to communicate internally and externally. Welcome to the new world.