Showing a human side?

How world leaders are blazing a trail on social media. 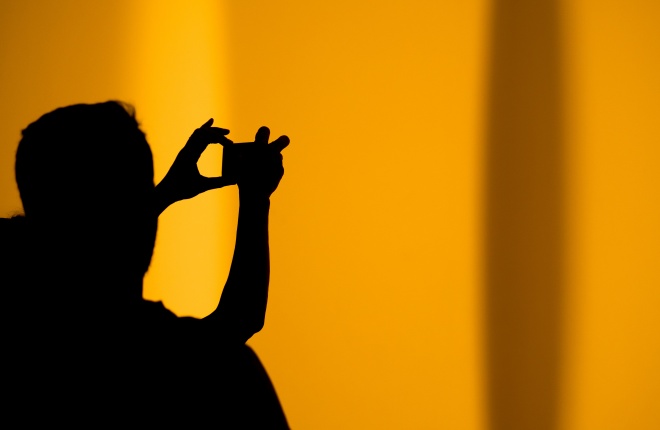 First and foremost, successful communication on social media requires you to present your human side to your audience.

This is one of the major findings from Burson-Marsteller’s 2016 Twiplomacy study of how world leaders engage with their public.

(Photo by Malcolm Lightbody on Unsplash)

The lessons of the annual survey apply equally to CEOs and the companies they run, if they want to get their messages across powerfully and effectively to their customers and their workforces.

One classic trap that communicators often fall into is that of using social media as a one-way broadcasting tool. Social media is not a megaphone and the most successful leaders recognise that communication is primarily about creating a conversation. Leaders often want to know which social media should be their main channel, or which platform is the best to use? The simple answer is that, today, being present on just one social media platform is no longer enough. Depending on the target audience, leaders should ideally combine a range of platforms to maximise the impact of your messages.

The 2016 edition of Twiplomacy, Burson-Marsteller’s global study of how world leaders, governments and international organisations connect via social media includes, for the first time, more than just Twitter and now covers all of the major platforms such as Facebook, Instagram and YouTube. In addition, the study also includes insights on how leaders use niche platforms when it comes to digital diplomacy such as Snapchat, Vine, LinkedIn, Periscope and Google+.

The findings are inspiring and insightful – and frequently entertaining. They confirm that world leaders have truly embraced the evolution of social media and, in so doing, offer corporate leaders and their communication teams valuable lessons in the most effective use of these platforms.

Key lessons for CEOs and companies

Twitter and Facebook are the two leading social media platforms for government communications, with 89 per cent and 88 per cent of all 193 UN member countries having a presence on Twitter and Facebook respectively. But, while these more text-based platforms continue to dominate the rankings, there is an emergence of the more visual platforms such as Instagram. This is not only a shift in how world leaders communicate, but a model lesson for communication as a whole.

A central element of the study is the rankings generated from the social media accounts which show the ‘most liked’ or ‘followed’ world leaders, as well as the ‘most engaged’, ‘effective’, ‘active’ or ‘conversational’ ones. These rankings are combined with a more in-depth analysis of the content created on the social media platforms, and thus addressing the question of how effectively world leaders and governments communicate on social media and what can we, as communicators, learn from them?

1: Reveal your human side

While the majority of images posted by world leaders on Facebook show typical diplomatic settings and announcements, the most popular ones are mainly family pictures. The single most popular post by a world leader is one of a photograph of the Obama family wishing everyone a Happy Easter, posted on the White House page. Similarly, the third most popular post was another family picture of Barack Obama hugging his wife Michelle on their wedding anniversary. This portrayal of family life is also very evident on platforms such as Instagram, where world leaders have uploaded personal photographs of themselves playing sports, or during their family holidays. 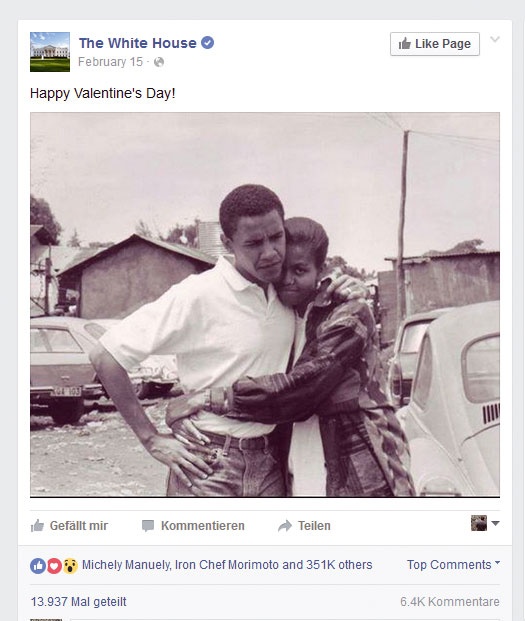 Snapchat takes this human side even further, making you feel as if you really are following the lives of world leaders. Argentinian president Mauricio Macri, for example, allows his virtual audience to follow him around the world on his official travels, making his Snapchat account appear very personal.

Instagram also offers a similar intimate connection with audiences, epitomised by the rise of “selfie diplomacy”. This generation-wide phenomenon features on the profile of Russian prime minister Dmitry Medvedev, who takes elevator selfies, as well as on those of the prime ministers of Singapore, Norway, Spain and Turkey, who are all notorious for their group selfies or “wefies”. 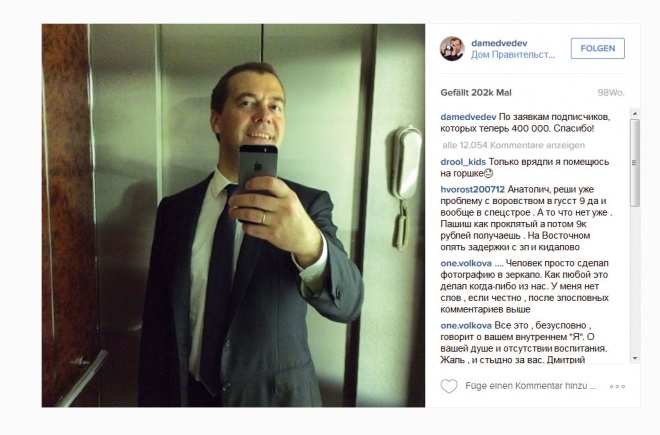 2: Be bold and visual

Creativity and the use of images and videos are crucial for communicating with impact today. While Twitter used to be considered as the digital diplomacy channel of choice for government leaders, recent years have seen a shift towards Facebook and other more visual platforms such as YouTube and Instagram that allow you to be much more creative. YouTube is also the second largest search engine in the world, behind Google, proving that video remains one of the strongest tools for communicating a message. 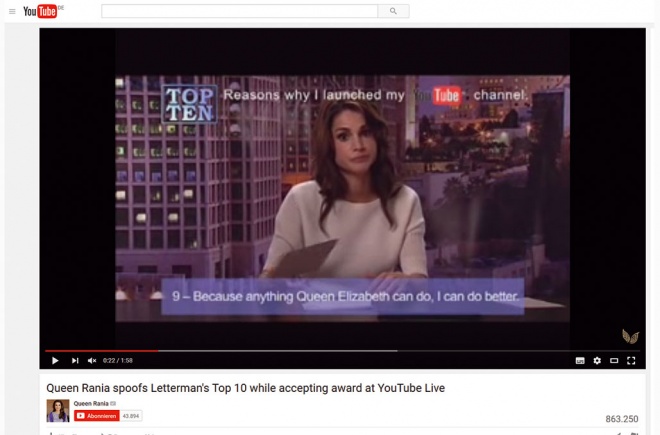 Instagram, now the fourth most popular platform, is typically used for posting behind-the-scenes images of world leaders, who use the channel to show their creative side. Some of the best examples of visual and creative content include collages by the European Commission, Hungarian politician Viktor Orban posting a picture of his tie on a chair with the caption “Saturday 07:45”, as well as the accounts of Estonian’s prime minister, the Argentinian president and, inevitably, the White House. 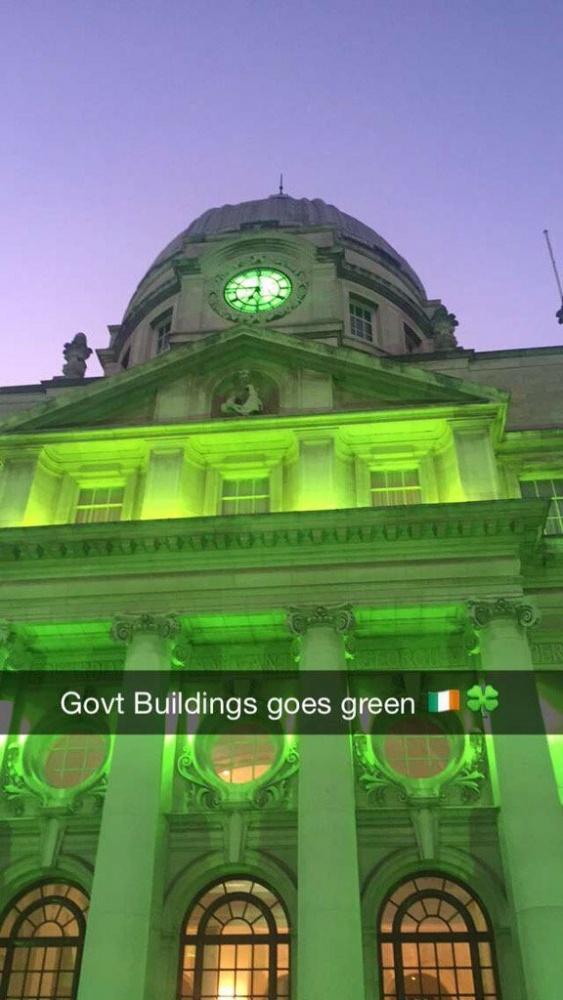 Every social media network has its own different audience. World leaders (and their teams) are highly professional communicators who understand how to tailor content to each separate channel for maximum engagement with their target audiences. Their content ranges from behind-the-scenes snapshots posted to Instagram, press briefings uploaded to YouTube, traditional ‘handshake’ photos with other world leaders posted on Facebook, as well as highly creative and intimate posts on the digital diplomacy niche channels. 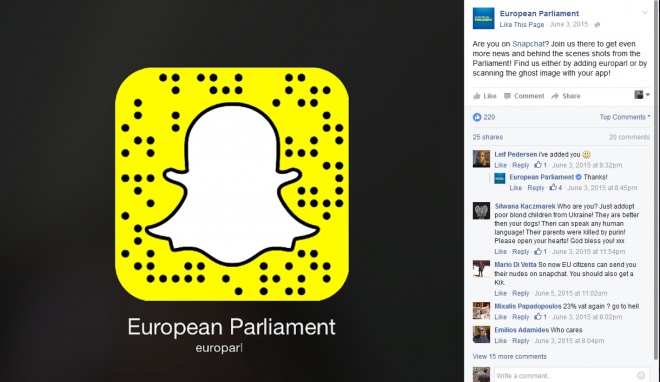 Snapchat, for example, is the platform considered to be the communications tool most used by younger generations. World leaders have recognised this and have therefore started to use the channel to engage with the leaders of tomorrow. To date, only 16 leaders and international organisations are active on Snapchat, but the content produced is topical and often extremely engaging.

4: Size does not necessarily translate into influence

Your top priority should be engagement, not simply numbers. What counts on social media is the genuine dialogue between you and your audience.

Facebook has almost caught up with Twitter in terms of the number of governments and world leaders using it. However, with 250 million likes on the 542 pages analysed, Facebook now has a much larger audience and global reach, making it the place for community building and engagement. Facebook is rich in engagement opportunities, through sharing, liking and commenting on posts and, on some profiles, users can even rate and review the organisation.

While Twitter has been criticised recently for its slowing growth, it is still projected to remain the number one choice for engagement by world leaders and governments. 108 foreign ministries and 68 foreign ministers have a personal presence on Twitter and they are making connections by following and interacting with each other on the platform. Nor are all of their exchanges very diplomatic. Real world differences are playing out on Twitter and sometimes end up in hashtag wars between embassies and foreign ministries.

5: Infotainment is the way to capture the attention of your audience

Entertaining posts create the most engagement. While YouTube content, unlike Instagram or Snapchat, generally remains more traditional in the way people approach it, the most watched videos are still the ones which are more fun than informative, for example the video that shows the then Senator Barack Obama dancing on the Ellen show with more than 13 million views. On Vine, which is famous for its short funny skits, Michelle Obama scored a viral hit and became the superstar of the White House channel with Turnip for what, her imitation of DJ Snake and Lil Jon’s song “Turn down for what” in honour of her White House garden.

"World leaders have learnt to embrace all of the key social media platforms."

In the early years of social media, digital diplomacy used to take place exclusively on Twitter. Today, however, world leaders have learnt to embrace all of the key social media platforms. They are using the democratising power of social media to their advantage and so communicating their messages to a much wider and more engaged audience. They are revealing themselves to be more than just a distant figure on a stage behind a podium and instead allowing their everyday humanity to shine through – as parents, husbands and wives, comedians and sportspeople. In doing so, they provide an object lesson for today’s CEOs and their communications teams. •

Twiplomacy is Burson-Marsteller’s annual global study of how world leaders, governments and international organisations connect on social media. This year, for first time, the study has been expanded beyond Twitter to cover all the major platforms including Facebook, Instagram and YouTube as well as more niche platforms for digital diplomacy such as Snapchat, Vine, LinkedIn, Periscope and Google+. Since January 2016, an analysis of each platform has been released on a monthly basis in the run up to the publication of the complete Twiplomacy Study of World Leaders on Social Media scheduled for May/June 2016. For more information visit www.twiplomacy.com.

Jeremy Galbraith is CEO of Burson-Marsteller Europe, Middle East and Africa, global chief strategy officer and a member of Burson-Marsteller’s Global Leadership Team. He has spent over 25 years helping leading companies, organisations, CEOs, Presidents, Prime Ministers and regulators position themselves with almost every type of stakeholder as well as manage critical issues.