The value of thought leadership 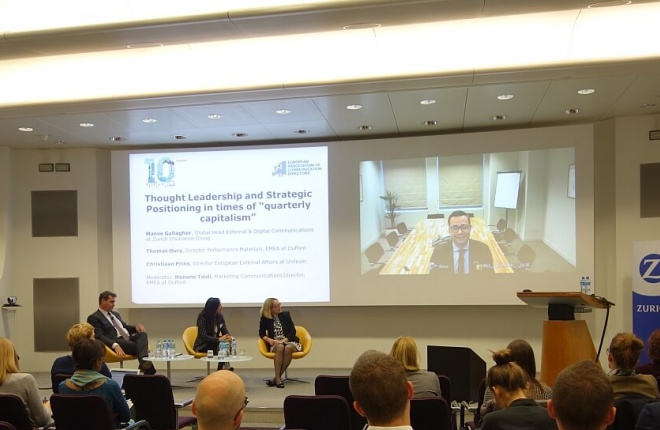 How can communicators promote thought leadership against a backdrop of quarterly capitalism?

That was the question at the heart of the second event to mark the 10-year anniversary of the European Association of Communication Directors (EACD). Hanane Taidi, EMEA marketing communications director at science conglomerate DuPont, welcomed a full room of international communicators at the Zurich Insurance headquarters.

Right from the outset, Hanane emphasises the difficulties faced by communication teams committing to the long term in a business environment demanding short-term results. “Reputation is not measured on a quarterly basis,” said Hanane. With that in mind, she called on the evening’s speakers to explore how the communications function is shifting to a senior strategic partner role that drives the positioning of organisations as leaders in their field.

First to make her case was Maeve Gallagher, global head of external and digital communications for the evening’s host, Zurich Insurance Group. She guided us through the PESO approach Zurich utilised for a fully-integrated campaign surrounding the release of their 2016 Global Risks Report. No, that doesn’t mean Zurich uses old Spanish coins to calculate risks but instead gained promotion through Paid, Earned, Shared and Owned media. As a strategic partner of their near-neighbours, the World Economic Forum, Maeve showed how positioning Zurich as a thought leader on political risk and climate change generated strong stakeholder interest in the launch of the Global Risks Report ahead of Davos.

Though the report’s content was disseminated through multiple channels, the message was synchronised and the information always easily digestible. Maeve pointed to the Zurich Knowledge Hub and the spokesperson role of Zurich Insurance chief risk officer Cecilia Reyes for the campaign as vital assets for driving engagement.

Following the high level of engagement generated by the 2016 release, Maeve later confirmed to Communication Director how Zurich is once more looking to identify important stakeholder concerns to help drive the momentum behind their report into 2017.

“We have a series of both online and offline events where we talk to clients to better understand what their concerns are,” Maeve told Communication Director.” We can use that information – filtering it also with the feedback we get through social channels – to understand what concerns people and what risks we need to consider for the next time.”

Communicators are critical to competitive advantage

The next to take to the stage was Thomas Oury, global business director DuPont Performance Solutions. In a room full of communicators, Thomas may have been the odd one out but, as he told Communication Director shortly before the event, he was eager for communicators to take the initiative in thought leadership programmes by contributing to defining business strategy, identifying issues and relevant stakeholders, and developing the tactics and tools to support the implementation of campaigns.

“As you are representing your company’s image in thought leadership,” said Thomas, “it is very important that the approach is thoughtful and credible. A good communications team is required to carry out these campaigns in a professional manner.”

During his presentation Thomas reaffirmed his belief that communication is fundamental in defining thought leadership strategies from the outset. However this must be coupled with a strong commitment from the top, so a collaborative approach is essential.

Thomas highlighted examples of DuPont’s own thought leadership in showing that even at a time of increased short-term business pressure it is crucial to show long-term thinking aligned with what he called “mega trends”. Thought leadership based on incremental change will never have a lasting impact.

Is there a larger mega trend than feeding the world? Thomas showed how, by creating the Global Food Security Index, DuPont built a benchmark model for NGOs, businesses and governments in relation to food insecurity. This positioned DuPont as a leader for a number of powerful stakeholders. 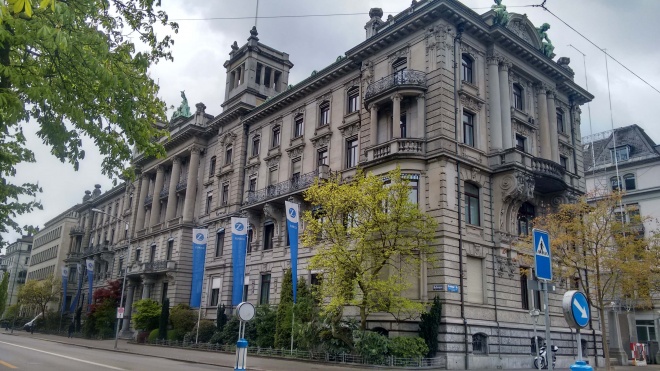 The beautiful Zurich Insurance building on the shore of Lake Zurich

Not managing but solving

The evening’s final speaker joined via live video stream from the Zurich Insurance office in Brussels. Christiaan Prins, director of European external affairs at Unilever, reaffirmed the idea that companies must be prepared to be part of the discussion and be bold in their thought leadership strategies. After all, no company is truly invisible in the age of social media.

The Unilever Sustainable Living Plan is an integral element of the company’s business plan, which provides a direct link between reducing environmental impact and growing business.

With Unilever’s transparent commitment to increasing positive social impact, Christiaan sees his work in external affairs as an opportunity to use advocacy for solving and not just managing issues.

He proposed that thought leadership can drive this change, particularly when companies come together to form issue coalitions such as is the case with the European circular economy package.

“The strength of issue coalitions is that you get likeminded partners on board,” said Christiaan, “so the agreement on the route to take is already there. That allows you to really drive forward very clear messaging that actually will drive change rather than just issue management”.

Christiaan’s focus on clear messaging echoed Maeve’s assertion that content must be easy for stakeholders to comprehend. Or as Christiaan put it, “a good position statement should fit in one tweet”.

A big thank you goes to Maeve Gallagher and Sandra Filzmoser of Zurich Insurance for hosting and organising the event – and to Hanane Taidi for taking on moderating duties with aplomb. For videos and tweets of the event, be sure to visit the Facebook and Twitter pages of the EACD. It’s now time for communications to go digital for the next EACD anniversary event in Amsterdam.