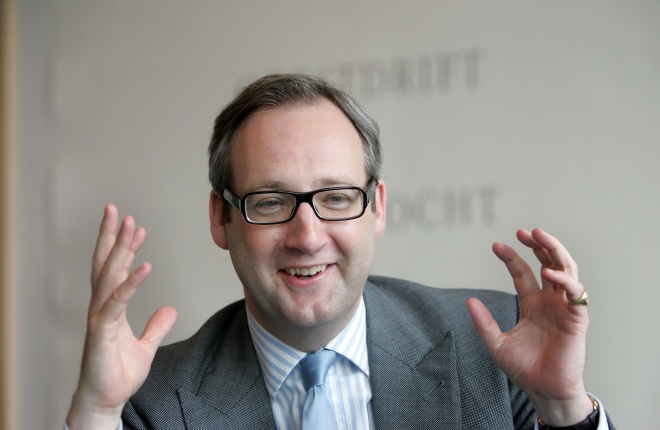 When did you realise that working internationally would be the right choice for you?

I think it was at the first time I went to Washington DC. It was purely a career option; I was headhunted. I had never lived or worked abroad before. I was relatively young and it was a good opportunity. You know, living abroad is quite different to living at home. It sounds like an obvious thing to say but the way you treat people, the way people treat you, the theatre of the ‘every day’, are new. It’s almost like discovering garlic in the kitchen! You know, food doesn’t quite taste the same ever again afterwards. So I think it was then I realised that I really enjoyed doing what I do. In a culturally different environment where my instincts were always challenged and everything was always going to be new I couldn’t take anything for granted. I just enjoyed that. When I first moved to the Netherlands, I didn’t really understand how things worked and what attitudes existed. Nothing was understood. And that gives you tremendous energy.

Did the Dutch live up to your non-existing expectations?

They did. I have a real fondness for other cultures anyway. Though the Dutch probably wouldn’t want me to say this there are a lot of similarities between the Dutch and the British; especially in the sense of humour. I think we’re both small people who had to survive by trading, we are surrounded by bigger enemies. There is a kind of openness to the world. But it comes down to business. The Brits like business, and so do the Dutch. They are traders.

You have also worked in America. Is there a different approach to communication between the US and Europe?

I think it’s fundamental and it’s one of the biggest challenges I face every day. The challenge isn’t nightmarish but it’s something that I can’t stop fighting. Anglo-Saxon societies are completely comfortable with selling. Americans, if you interview them for a job, if you talk to them normally, if you are talking to journalists, it’s perfectly acceptable - in fact it’s required - that you say how good you are. In the Netherlands it is considered absolutely ‘bad form’ to sell yourself or your company. They have a phrase here: “Being normal is good enough.”

How do these differences influence Public Relations?

Hugely. If I say we’ve done something good, I will say right, why don’t we try and set up an interview with the Financial Times. Now let’s tell them that we were number one in this, that we beat the others in that and that we’ll be this successful in two years time. You will get tremendous resistance to any kind of statement that says you are good. You are allowed to let your results speak for themselves, you are allowed to say that you have 60,000 employees, that you are a fortune 500 company, but anything that references personal success: absolutely not. They do not allow any kind of personal profiling at all.

So you do professional low-profiling?

You can do an interview with the FT about business and what is on at Akzo Nobel. Here’s a very good example actually. Hans Wijers (chairman of the board) did a profile in the FT about a month ago. Myself, my team and our agencies around the world read it and said that it was really good. The only negatives we got were from Dutch people. They said: “Oh, he is not the only person who has worked hard. It wasn’t just him. We were all part of the company then.”

What are the crucial differences between the way PR is seen in US companies and European companies?

I think it’s changing. Once upon a time in America Public Relations and communications was always considered extremely important. When I went to Washington I immediately reported to the chairman of the board. They recognised communication as a central part of modern corporate life. That is now beginning to catch up in Europe. When I was at DSM I reported to Peter Elverding (board chairman). Here, I report to Hans Wijers. Budgets are increasing, respect and attention is getting better. Still, when I talk to others in a lot of European companies, PR is considered a nice-to-have and not a need-to-have.

Still it seems as if PR is seen as something evil in Europe. But not in the US.

I think it’s less so. When I started in the Netherlands we wanted DSM to be open, available and of course we wanted to get our stories and personality out there, to build our brand. And journalists were surprised by this. They had not come across a company before that was so open to talking to the media. Recently, I was talking to someone and he said that in the last three or four years he’d noticed companies really changing. They’ve gone open to the media and the media, I think, respond to that. They like companies if they are open.

A combination of the European and the US way of communication would be an ideal model?

It would be absolutely ideal, because I like European stand back, look and think what you’re really trying to say. Americans are a little bit more excited about their trade. They are little more, sort of, happy about it. I think if you get this positive optimistic Americanism, this is a very nice combination of having a relationship like an American, but getting down to detail like Europeans.

Before you joined the chemical industry you worked for Rupert Murdoch’s News Network? Why did you change?

I left News Network when the digital bubble burst and this opportunity came up. I thought, well chemicals, what the hell do I know about chemicals? But you know what, and this could be controversial, I think communications can pretty much fucntion for any company. Talking to journalists, trying to build a brand image, that’s universal. If you are competent, if you understand your job, if you have a good instinct for communications, if you have the energy and you just enjoy it, I don’t really think it matters what company you work for.

But working for Murdoch and for Akzo Nobel must be two different stories, there must be different strategies.

Yes, of course. When I worked for Murdoch people tended to take our phone calls because digital was sexy and fun. Now, I’m not going to stand up and tell you chemicals are fun or sexy. I have to fight, all my team has to fight much harder for media attention. We have to go out there and explain why this is an interesting story.

Was changing industries easier for you, because you had already proven flexibility through working abroad?

I’d like to think so. If you spend three years in a foreign culture you’re going to learn some lessons. If you’d met me ten years ago when I was in America I was probably a bit cocky. A young Brit, fresh out of London, having worked for a big company, headhunted to Washington? You’d think you’re pretty good stuff! And I think, having had some disasters and some failures; making some pretty major mistakes, you can’t help but learn lessons. If you’ve got half a brain, you learn by your mistakes. I was lucky to learn them young, I was lucky to learn them abroad. It allowed me to know that there are no special rights for foreigners, you have to go with the country and have to understand it.

Your communication strategies have to be global. What are the essential elements of such a concept?

It’s very simple. You’ve got to be aware of the world. It’s mechanical in some ways. Let’s cut the answer into two parts. The first part is purely technique. You have to have some good local agencies. It is as simple as that. Some companies will have in-house communications professionals, who will do everything. I would rather have a leaner team whose job it is to dig up the stories and then manage them with the help of strong agencies.

But wouldn’t that be a task for you and your colleagues?

I would really not want them to. If I have a very good agency in London and I can say to them, these are our targets, this is what we want to do this year, we agree on a price. I don’t do retainers, I pay on deliverables. If the agencies don’t deliver, I don’t pay them. With an employee, that’s quite different. You’ve got a whole different relationship. And in Holland you can’t fire people, it’s very difficult.

Still there must be a kind of global structure.

We have a sort of matrix-structure. We have a media relations office here, their primary purpose is to dig up stories within the businesses to feed the agencies. They answer media inquiries and run day-to-day media activities. In each country we have a communications manager, but also have an agency managed by that communications manager. We have the same structure in our other key countries.

Is there any ‘Dutch’ relevance to Akzo Nobel in its functions as an international company?

No. We are a global international company in 80 countries, with many people spread across the globe. Akzo Nobel is seen less and less as a Dutch company. But let me tell you one thing. For any company, as for a person, to be successful, you have to know where you come from. You have to remember where your soul is. Akzo Nobel comes from the Netherlands. That’s good because you have to be something. If I am going to sell myself, I have to come from somewhere. Otherwise I would have no integrity and that’s the name of the game. Personality is the name of the game.

Looking into the future: will national borders in communications disappear?

No. Let me connect that to my last answer. Cultures are different. If you cross the border from the Netherlands into Belgium, it’s completely different. Same if you cross the border from France into Belgium. Roads change, the atmosphere changes, trees change, peoples’ looks change, you are in a completely different place - and communication will always be most effective when it thinks local and acts local.

What would you tell young communications professionals it takes to pursue an international career?

I think most important is a sense for adventure and the ability to listen. If you are willing to just give it a go, be willing to sail, then just do it and live a totally different life. Then it’s so worth it. You become a better communications person