Super-events like SXSW are revolutionising the way we approach conferences

Or is it something a little looser, a little livelier – and maybe even a little more chaotic? A growing number of events are relinquishing the old hierarchical model of conferences in favour of a grassroots festival atmosphere. Thousands of people descend onto host cities looking to cross paths with other innovation seekers, while organisers balance between work and play, with varying degrees of focus on tech, business, music and art – and all with just a touch of chaos thrown in.

Embracing this chaos may be a vital ingredient to organising a successful event, but how does one go about it and what do participants really take away?

Every March, the most headline-grabbing example of this new breed of conferences takes over the town of Austin, Texas for 10 days. The South by Southwest conference, commonly shortened to SXSW, counts four separate festivals under its banner: Interactive, Film, Music and Comedy. Of these four, Interactive attracts professionals from around the world to learn and connect. According to Hugh Forrest, director of the festival, the unique quality of SXSW is the variety of people flying into Austin. “SXSW registrants range from medical pioneers to mobile technology developers to music industry professionals,” Hugh told Communication Director. “The one point of commonality for all these attendees are that they are very creative and interested in learning new ideas, as well as different ways of thinking.”

“Finding suitable locations to house the many events is a pressing matter.”

SXSW Interactive is one of the largest events of its kind, attracting over 37,000 registrants in 2016. On the European level, The Next Web (TNW) conference is among the best attended, boasting more than 20,000 attendees in 2016. Not bad for an event that drew just 300 registrations in 2006 when it was founded by Dutch entrepreneurs Boris Veldhuijzen van Zanten and Patrick de Laive. Boris attributes the growth of TNW – held in a purpose-built village for two days in Amsterdam during May – to the rising number of occupations that are influenced by digital technology.

Beginning as an internet conference for developers, investors and entrepreneurs, their audience has broadened as digital innovations have transformed the world of work. “We’re focusing on ‘Generation T’, the technology generation,” Boris told Communication Director. “It’s a group that has technology influence their work or daily lives beyond the norm. If you like your iPhone you are not necessarily Generation T, but if you build apps for it or if you are a professional gamer then you obviously are.”

Another conference designed for the T generation has also found a home in Europe. For the past five years, South Summit has taken place in Madrid during three days in October. A gathering of startups from all over the world (but with a special focus on Southern Europe and Latin America), last year’s event attracted around 10,000 attendees. Centred around a startup competition with two main criteria, disruption and innovation, the event is described by Liz Fleming, vice president of  international at South Summit, as “A place where  startups can come and play, and experiment, break, trial, test and invent.” 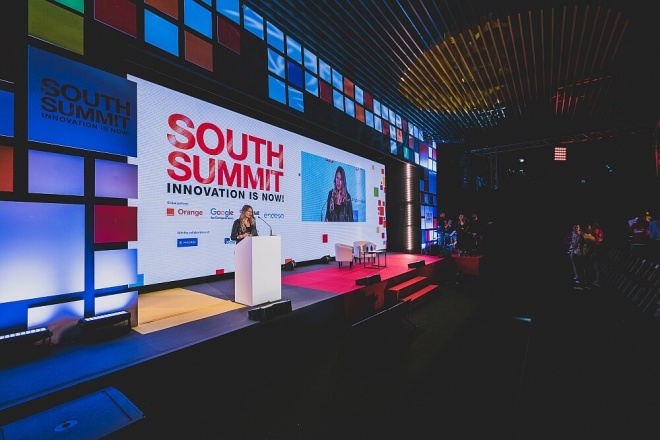 With these events attracting tens of thousands, finding suitable locations to house the many events is a pressing matter. Though its events sprawl across the city, the core of SXSW activities take place in a downtown building. The midsize city feel of the Texas capital coupled with the central location of the main venue allows registrants to chase fun across town without much effort. But this convenient setup is close to unique in the world of creative conferences.

South Summit’s venue history is more colourful, including two years inside Las Ventas, a functional bullring. This year, it took place at La [email protected], an old elevator manufacturing warehouse on the southern outskirts of Madrid converted into a conference centre with four purpose-built auditoriums. “The local government wanted to launch the space as an important part of the entrepreneurship ecosystem in Madrid,” explained Liz, “so this year they invited us to participate as Spain’s largest startup event. This has allowed us to increase the quality of production for the event”.

Production values are another important hallmark of the modern day conference. Patrick de Laive said TNW is always looking to push these further: “We always work with the latest technologies, we try out new things onstage that have never been done before, and every year we do something totally different. Our production is a surprise every year.” Wytze De Haan, TNW director of events, described the intensive 12-month planning of the festival village, which relies heavily on a 3D model of the terrain. “The difference between the first version and the 28th, when we finally have the map and all of the buildings in the right position exactly the way we want it, is totally different,” he told Communication Director. “What it really helps with is having a clear goal that you can communicate with all the different people you are working with throughout the year”. Careful measures like these are crucial when your event involves five stages for keynote presentations, two business exhibitor areas, an arcade hall, food truck carpark and two live television studios.

In the thick of it

Year-round planning is also a hallmark of SXSW Interactive and South Summit. At Interactive, attendees can expect to find a mix of keynote and panel presentations, party-like networking events and an awards presentation focused squarely on innovation. SXSW Interactive director Hugh Forest explained a registrant’s time at the event is usually balanced between the conference sessions and the various networking events. However, the most popular attractions are often the keynotes. This is hardly surprising, given the calibre of speaker, such as 2016’s “Attendee In Chief”, Barack Obama.

According to Hugh, there is a simple way to avoiding a 35,000-person logjam during these keynotes: “They are simulcast at various other rooms throughout our venue system. So, while all the registrants may not be in the same place for these keynotes, a lot of the registrants are experiencing the same content at the same time during this programming slot.” While a large amount of content for SXSW comes from SXSW PanelPicker – a modified approach to crowdsourcing ideas from leading creative industry experts – the South Summit takes a more manual approach, built on the 10 industry categories evaluated in the startup competition, which is the heart of the conference.

At South Summit, to inspire the entrepreneurs and startups that make up half of those in attendance, the speakers invited derive from a simple aim. “We want the best disruptors in the world in each of these industries at South Summit”, Liz told Communication Director. “We’re trying to juxtapose easily identifiable global success stories with cutting edge, new innovations in terms of products and company building”. TNW, meanwhile, isn’t necessarily looking for the biggest names for their keynotes, but instead place a premium on entertainment value and honest insights.

“Often there are people in a company who can deliver  a better talk than the founder or the CEO,” Patrick explained. “Some people are really good at presenting and turning it into a show and for that you don’t have to be the CEO or the founder of a company.” However, as Wytze points out, the speakers are only one part of the TNW equation: “The food lineup should be as impressive as the speaker lineup”. Accordingly, the TNW village was built around an open-air food court with 25 curated local food trucks and – naturally – a gin and tonic pit stop. 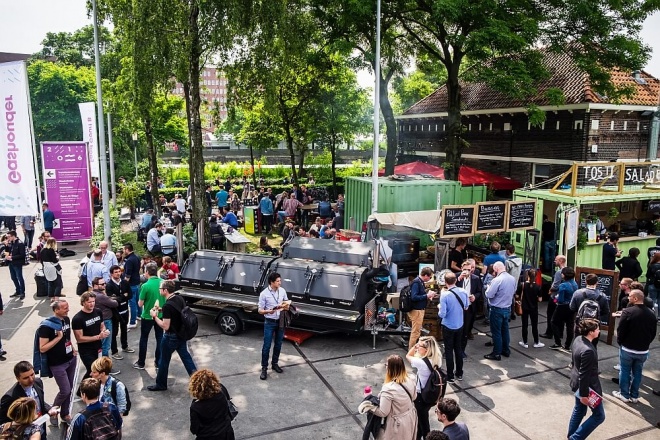 All three of these conferences have experienced remarkably strong growth in their lifespans, proving the demand for multifaceted business event. The name recognition of SXSW alone sets Interactive apart from similar conferences around the world. Hugh is convinced that continuing this success will depend on incremental changes to an already successful model. “We’re always taken a long-term perspective on these organisational challenges. Meaning, every year, we are trying to improve the organisation a little more,” he said. “Over time, these small improvements add up to make for a pretty powerful formula for success.”

TNW’s Boris Veldhuijzen van Zanten said he does not want to lose the intimate atmosphere that he believes is unique to the event. When asked how TNW maintains its original spirit, Boris answered that it comes down to interaction among all attendees, whether speaker or registrant. “At most conferences, there is the audience, the stage, and a place behind the stage where all the VIPs mingle. We don’t have that,” he said. “Speakers walk through the audience to the stage. When they are done, they walk through the audience to the speaker bar or the booths on the side of the audience. Anyone can go talk to them”.

South Summit remains focused on attracting the “100 most disruptive startups” in the world to their competition and conference: crucial to this is enabling those on smaller budgets to get involved. South Summit was free for the first four years and kept prices down even after introducing an entry fee in 2016. “We use the low price to encourage universities and accelerators to attend – people who are passionate about innovation,” Liz explained.

Not only do these events promote innovation on the speaker stage, they practice what they preach by constantly innovating their offering, and ultimately innovating the very format and structure of conferences. By throwing out the rulebook and expanding the definition of what a conference can be, they are attracting likeminded individuals – disruptors in their own chosen fields. It may be time for others to embrace the chaos.